With push to increase the number of bike lanes, cyclists and commuters discuss what's realistic Copyright 2019 Scripps Media, Inc. All rights reserved. This material may not be published, broadcast, rewritten, or redistributed.
With 184 miles of on-street bike lanes in the Mile High City already in place and plans for 125 more miles to be put down over the next five years, cyclists and commuters in the city are again talking about what works best for everyone and what is realistic. 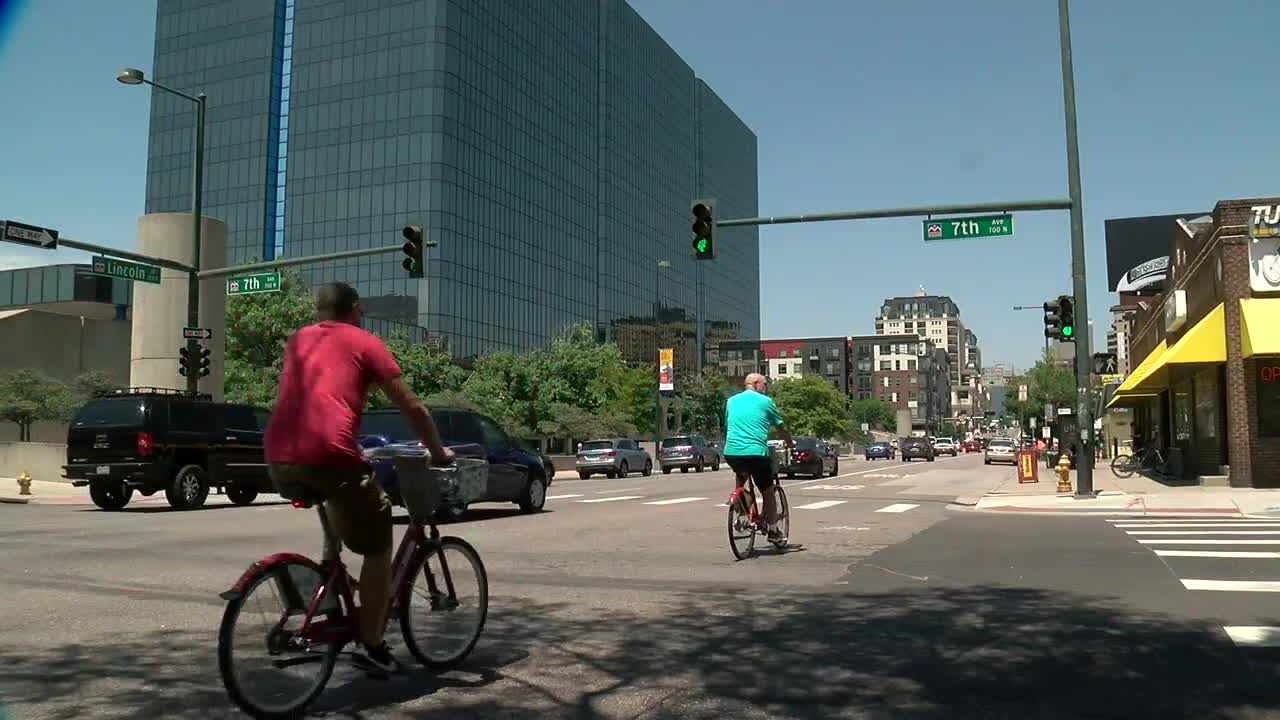 Editor's Note: Denver7 360 stories explore multiple sides of the topics that matter most to Coloradans, bringing in different perspectives so you can make up your own mind about the issues. To comment on this or other 360 stories, email us at 360@TheDenverChannel.com. This story will air on Denver7 News at 10 p.m. on Wednesday. See more 360 stories here.

DENVER – With 184 miles of on-street bike lanes in the Mile High City already in place and plans to add 125 more miles over the next five years, cyclists and commuters in the city are again talking about what works best for everyone and what is realistic.

It has reignited discussions about safety and reducing carbon emissions among other things in Colorado, a state touted year after year as one of the nation’s most bike-friendly.

Bicycle Colorado estimates 8% of all commuters bike to work in downtown Denver, but they’d like to see that number increase and want all riders of all ages and abilities to be comfortable cycling around the city.

Cyclists are not limited to designated bike lanes. They can use any lane they choose on a Colorado roadway, however they must dismount within a block of riding on a sidewalk in most Colorado municipalities.

Some say the infrastructure in place doesn't necessarily make cyclists or drivers comfortable.

“We want people of all ages and abilities to feel comfortable hopping on a bike to get to where they need to go – not just the avid bike rider,” said Heather Burke, public information specialist with Denver Public Works.

Val Flores says she believes cyclists need to do a better job of sticking to the rules.

“I’m the person that is scared I might hurt someone because they don’t follow the rules,” she said. “They just come at you.”

But Stephen Fink, who makes deliveries on his bike for a living, sees both sides - and he knows the dangers of cycling in Denver all too well. He’s been hit by cars twice.

“I have a bike that’s totaled. The scar on my nose is from the south side of the convention center, where I got T-boned,” he said.

He said he gets irritated when cyclists become overly aggressive and give other cyclists a bad reputation. He said he “hates” when he sees a cyclist blow through a red light – another common complaint for drivers.

Colorado lawmakers passed a measure last year allowing for municipalities to implement an “Idaho stop” – where cyclists can treat stop signs as yield signs and red lights as stop signs. But, Thornton is one of the few cities to implement the new law. Only Aspen, Breckenridge, Dillon and Summit County have similar laws on the books.

There were two deadly cyclist-car crashes in Denver in 2018, according to the Denver Police Department, and 23 reported in the metro area between 2011 and 2013, according to a report on traffic crashes from the Denver Regional Council of Governments.

Some say infrastructure has improved

Bicycle police officer Wallace Sam has policed the streets on two wheels for the past four years and says it can be a jungle in Denver.

Ron Else sees some of the infrastructure improvements daily. He owns a book store on South Broadway, where a protected bike lane has become one of the most controversial in the city.

“Whenever I go out there, I look left, I look right - and I rarely see a bicycle,” he said.

But Denver Public Works says the South Broadway lane is a success and they’re moving forward with extending the pathway.

Cyclists say they’ve seen the improvements over the past few years and they are generally more comfortable riding around town than they had been previously.

And no matter one’s view – all agree that finding common ground and mutual respect would be the most important thing for the future of transportation in Denver.

“It’s really all about looking out for each other,” Todd said.