What should the future of the 16th Street Mall look like? 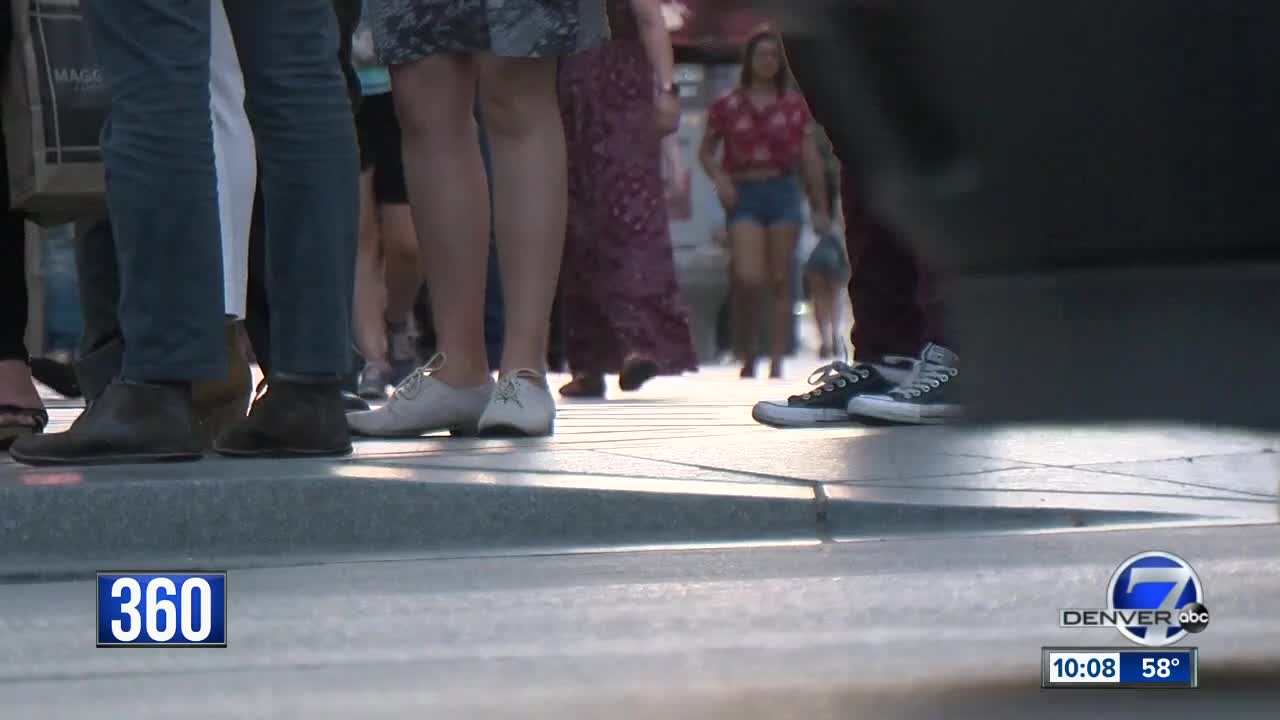 The 16th Street Mall is in for a major redesign . The city of Denver has been working for years on a plan to revamp the area to make it a more practical and safer use of space for businesses and tourists alike. 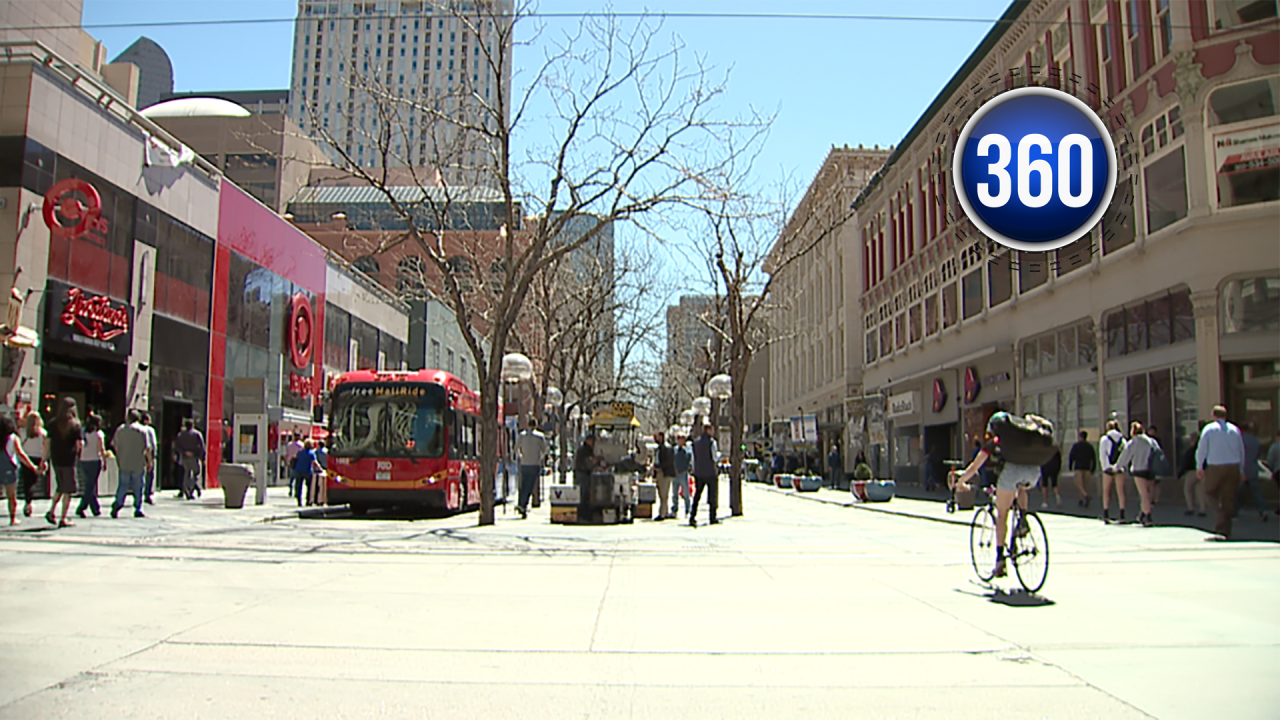 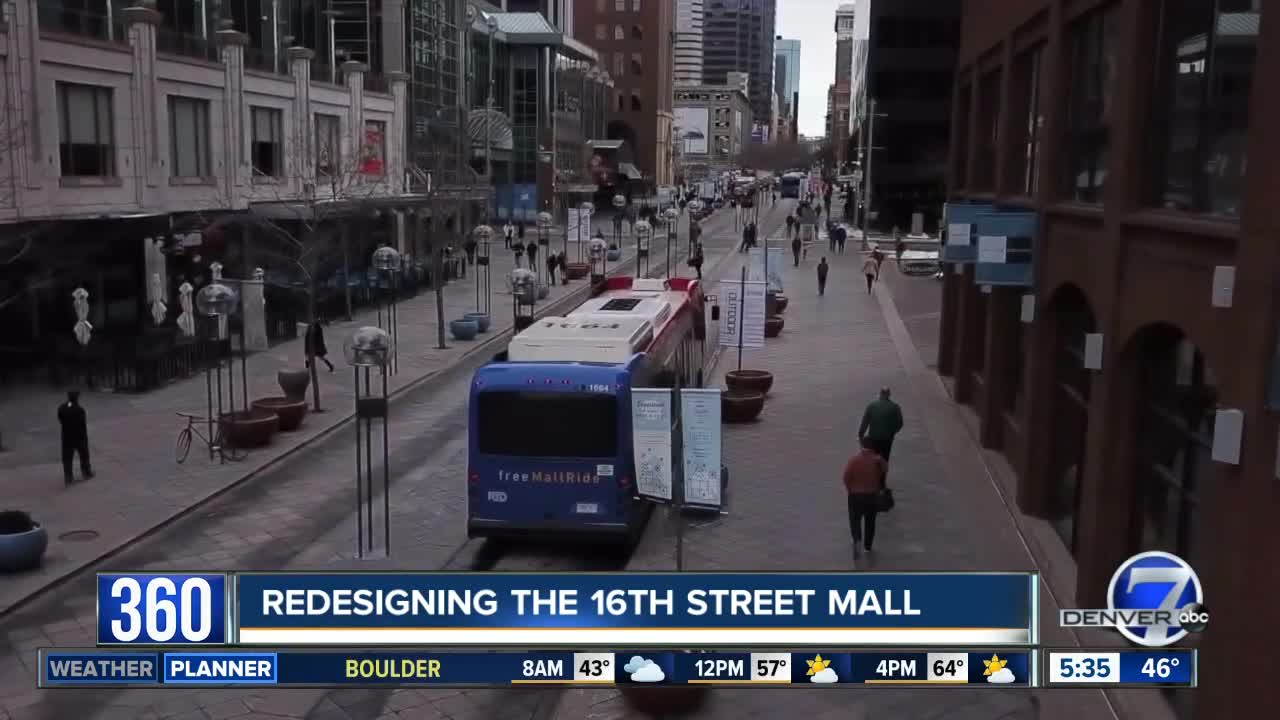 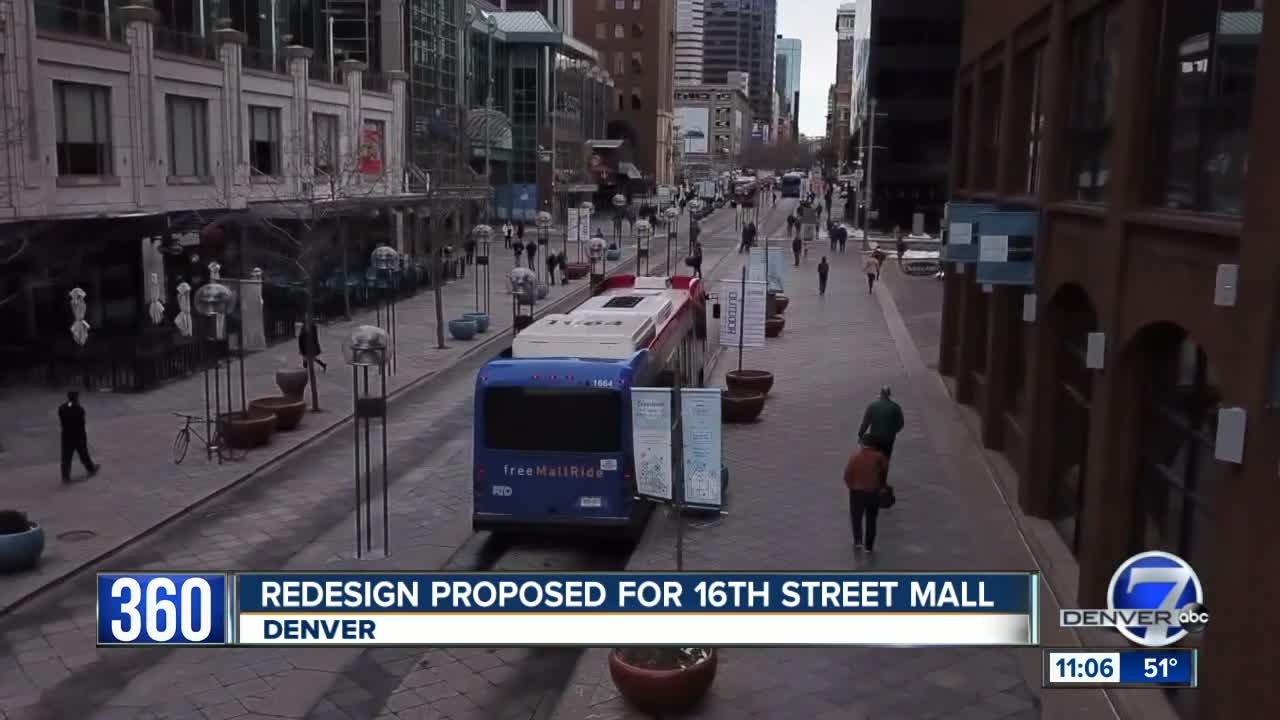 DENVER — The 16th Street Mall is in for a major redesign. The city of Denver has been working for years on a plan to revamp the area to make it a more practical and safer use of space for businesses and tourists alike.

However, the redesign will take years to complete and it will cost the city millions of dollars.

Denver7 spoke with different stakeholders on what the future of the 16th Street Mall should look like and what the redesign will mean for the area in the short-term and in the long run.

It's time for an upgrade

The 16th Street Mall is now 37 years old — five years older than its intended lifespan. For Denver Public Works, the street is expensive to maintain.

The granite tile pavers that line the streets and sidewalk are not good for drainage and constantly pop out of place when it rains or snows. The ground freezes and then expands as the weather warms up.

"The infrastructure of the mall is in pretty bad shape. It’s costing quite a bit of money each year to maintain the mall," said Brian Pinkerton, the principal project manager for Denver Public Works. "You’ll see the maintenance crews along the mall almost continually repairing spots."

Denver is currently in the process of evaluating options to rehabilitate the area and perform a federal environmental assessment to make the redesign possible. It's accepting public comments on the draft environmental proposal until May 14.

Along with changing the makeup of the mall, the city is also considering a major redesign to the layout. Instead of having a center median where kiosks, trees and tables sit like the mall's current setup, the city wants to remove the median and put the bus lanes closer together. Then, it wants to expand the sidewalks on each side of the mall so that they are each 10 feet wide.

"We think that we can make it more activated and function a little bit better than it has in the past," Pinkerton said.

Construction on the mall likely wouldn't begin until late 2020 and it would happen in phases so that the mall is never completely shut down for construction.

The way the city sees it, more people are visiting the mall than ever before and that number is only expected to rise. The city is hoping the redesign will make the 16th Street Mall safer and a more practical use of space for everyone.

"The 16th Street Mall has been a huge success story for Denver. In the 37 years that it’s been built, it’s really become a centerpiece for downtown. As we rehabilitate and reconstruct it, we’re trying to make it even greater for the rest of the 21st Century," Pinkerton said.

The Downtown Denver Partnership has been a major player in the redesign discussion since it partners businesses in the area to support the local economy.

President and CEO Tami Door says the 16th Street Mall is vital to the Denver economy, drawing in not only tourists but also new business opportunities.

"It is one of the biggest economic drivers in our entire city. It is the largest employment center in terms of a geographic area and it’s one of the busiest transit zones in the area and it’s our highest pedestrian county in the entire state of Colorado," Door said. "A city needs a heart and our heartbeat is right here on the 16th Street Mall."

Door is hoping the additional sidewalk space will make room for restaurants to add patio cafes, for the city to expand seating and that it will provide more opportunity for public art, exhibits and kiosks.

Door knows the redesign will cause some construction headaches in the short-term for businesses and says it will be important for the Downtown Denver Partnership and others to encourage people to keep coming to the area during the redesign.

"The classic 'we are open for business' will be a really important message," she said. "I think all of us have to be really supportive in that process."

Despite the construction headaches, Door is looking forward the the change and says it will be good for businesses in the long run.

For the sake of progress

The city's redesign means that kiosks like Albert Breckenridge's hot dog stand that sits in the median near the intersection of 16th and California will have to move.

Breckenridge, who's a Denver native, has been grilling hot dogs there for about a year and a half; his brother owns a burrito stand on the median a couple of blocks down.

He says the area has gotten a lot safer in recent years and he's noticed that more people are visiting the area.

"The biggest issue I see is the homeless. They’re able to set up. I had two people set up here for like a week," Breckenridge said. "It really slows me down and makes people not as willing to come up to me."

He says he understands the need to redesign the mall, even if it means he will have to move.

"Daily I see people have close calls with the buses," Breckenridge said.

He would like to see more permanent seating in the area so that people who get food from kiosks or who just want to rest for a bit have a place to sit.

"I’m almost certainly going to get hit by it," Brown said.

Brown says the number of newspapers he sells can come down to what side of the street he's standing on, so moving to a place where there are fewer pedestrians will have an effect on him.

He also believes the redesign is catering more to the tourists coming to the area than to the people and businesses that reside here, but he says he understands why the city is doing it and the understands economic benefits the change could create.

Brown only hopes the redesign won't be a major inconvenience.

"It’s going to be a big project. I just hope that they have it organized so that it doesn’t affect the scene down here," Brown said.

For Denver police, it’s all about changing public perception.

“The perception a few years ago was that the 16th St. mall was not a safe place to be,” said District 6 Commander Aaron Sanchez.

That negative perception was fueled by several serious incidents along the mall, including a pipe attack in 2016 and another attack the next year that injured three people.

Since then, DPD has launched an initiative to reduce crime in the area. Part of that initiative involves more officers patrolling the area in cars, on motorcycles or by foot.

"We want that good old-fashioned community policing vibe," Sanchez said. "The reason we do put a lot of officers there is because of the perception."

The goal is to have an officer on every block of the mall and a more physical presence in the area. Sanchez says the efforts are working.

"We are seeing the crime being reduced and just the attitude being more positive," Sanchez said. "We have a lot of data that shows that we are trending in the right direction and the 16th Street Mall should be and will be a very positive place."

Beyond that, Denver police are also making upgrades in the area, adding Shot Spotter acoustic technology so that if a gun is fired nearby, police will be able to pinpoint where it happened and respond more accurately.

As for the issue of homelessness, Sanchez says that's a bigger issue than the mall itself and something the police department is working with the city to address.

"Our idea is to look at the bigger issues of mental health and substance abuse and the presumption of crime, a lot of those things that are just bigger than the police department," he said.