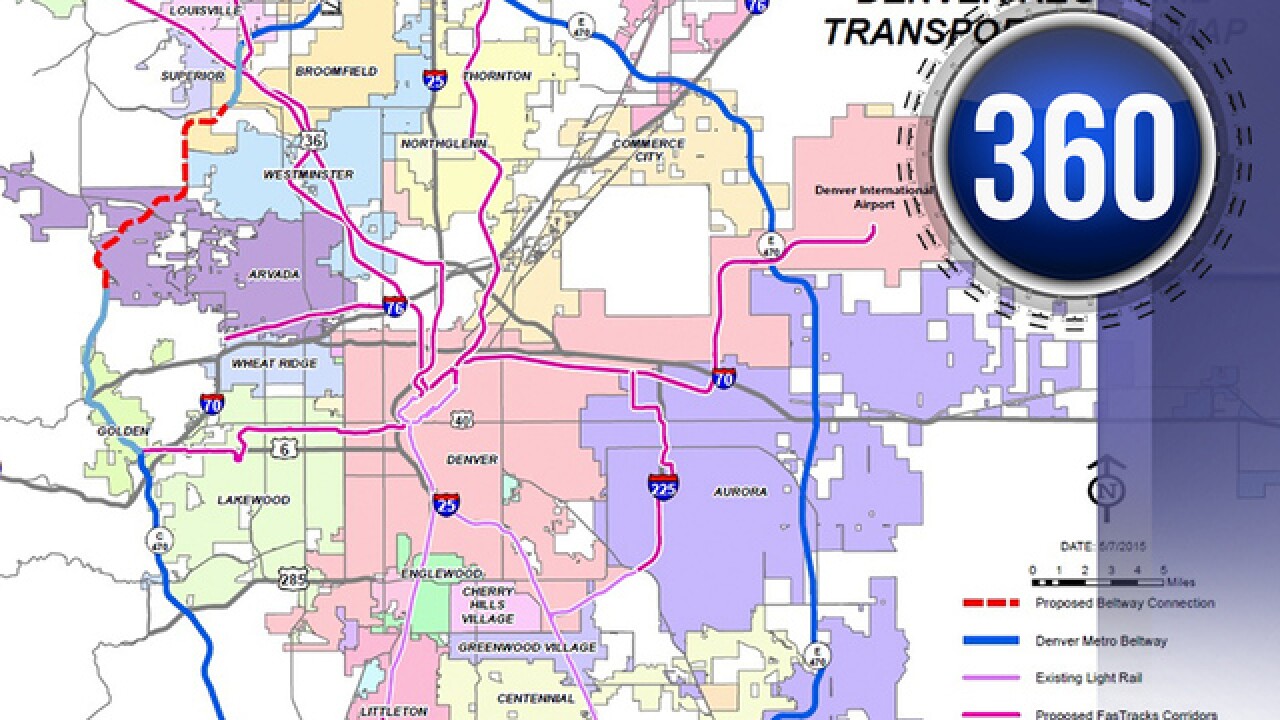 ARVADA, Colo. -- Denver7 went 360 to look at multiple perspectives on a new effort to complete the 470 loop around metro Denver, and viewers are now weighing in on the proposed plan.

The ten-mile, four-lane toll road is being called the Jefferson Parkway and runs through two Arvada neighborhoods.

The current project is a compromise, it closes the loop but doesn't tie into the state's two other major interstates.

Jefferson Parkway will not connect with 470 or Northwest Parkway. Instead, it intersects with existing state Highway 93 in Golden and Highway 128 in Broomfield.

Elle took her frustration of the news to Denver7's Facebook page. She wrote, "Another route for my GPS to help me avoid! Lovely."

Laura also chimed in on Facebook, "No one wants this on the west side! It will be a toll and cause more pollution, traffic and crime." She wants to see improvements made to Highway 93 and Indiana St.

Jefferson Parkway will be built through a public private partnership, similar to what has been done with E-470 and Northwest Parkway. CDOT is no longer involved in the project and walked away from it in 2008 citing a lack of funding and inability to satisfy the many objections from the City of Golden to overhaul Highway 93 and connect with 470.

Shana sent an email with her take, "Finally. We have wanted and been waiting for a loop to be completed forever!" she said.

Another valid question viewers raised is about a section of Jefferson Parkway that runs through Rocky Flats.

Bill Ray is the executive director of the Jefferson Parkway Highway Authority. He said the Rocky Flats concerns aren't valid based on a final report from the Department of Energy.

"(The) level of cleanup was sufficient for unlimited use," explained Ray.

Ongoing dispute with the FAA

Viewers also asked about the section of the toll road in Broomfield near the Rocky Metropolitan Airport. Ray said the Federal Aviation Administration does have concerns.

"(The) issue they have is (a) question of safety, and that question is, 'how would we mitigate in case of the possibility that a plane would land short of the runway?'" he said.

While that may seem like a major safety issue, Ray said they are confident they will be able to reach an agreement with the FAA and have a plan if they are not able to.

"There are many other ways that it could work, but none of them are as efficient," said Ray.

The Jefferson Parkway is closer to reality than it ever has been before, but it's still not a done deal. The exact cost of the toll will be determined later once a private partner is chosen.

Ray said they hope to break ground by 2020, but that timeline is still up in the air.

He also asked that neighbors who live in Leyden Rock or Candelas bring any concerns or concessions to their homeowner's association.

"I certainly encourage them to go make their concerns known through their homeowner's association so we have a single set of, a single voice that we're working with," said Ray. "We are committed to making sure this is a project that everybody can live with."