US Supreme Court won't rule on how the ADA is applied to technology. What happens next? 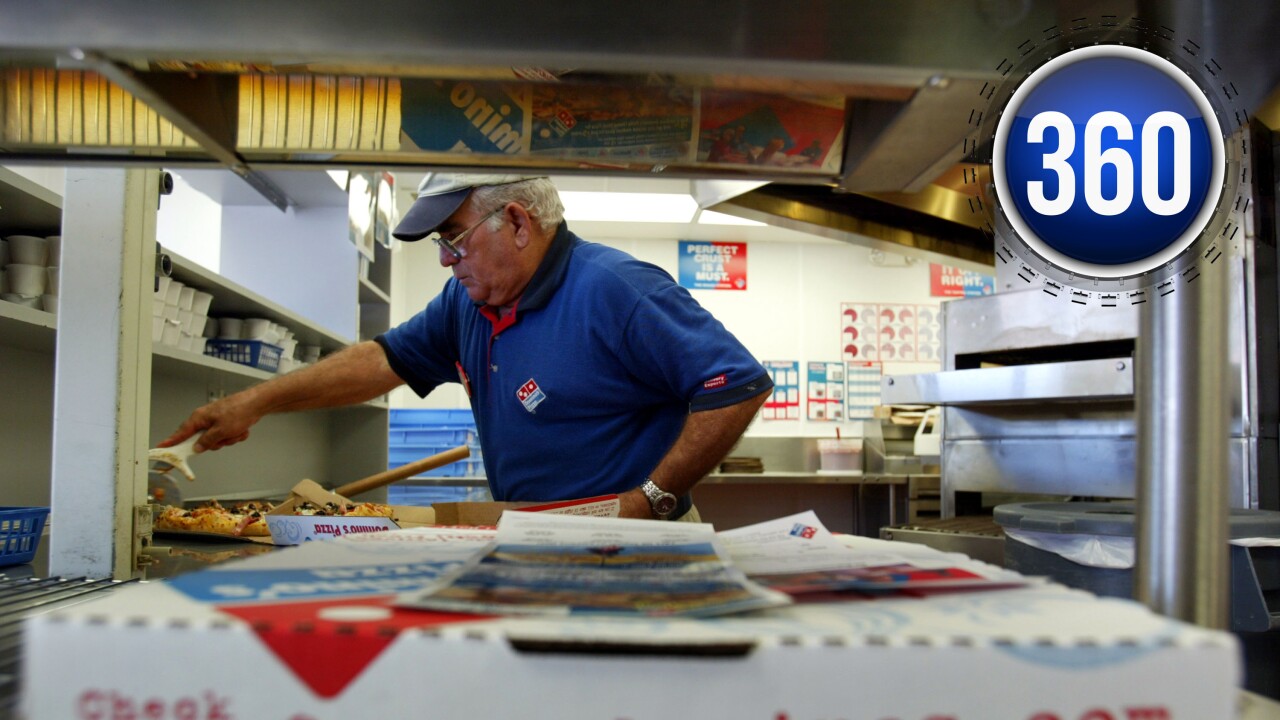 Joe Raedle/Getty Images
MIAMI, FL - APRIL 14: Elio Blanco cuts a Domino's Pizza April 14, 2004 in Miami, Florida. Domino's Pizza is looking to raise $300 million in the stock market by listing on the New York Stock exchange. The Michigan-based firm already has a London stock market listing for its UK subsidiary. According to media reports, the funds raised may be used to pay off debts. The 44-year-old firm now has 7,400 outlets in more than 50 countries. The firm is reporting that pizza sales are up 5.8% in 2003. (Photo by Joe Raedle/Getty Images) 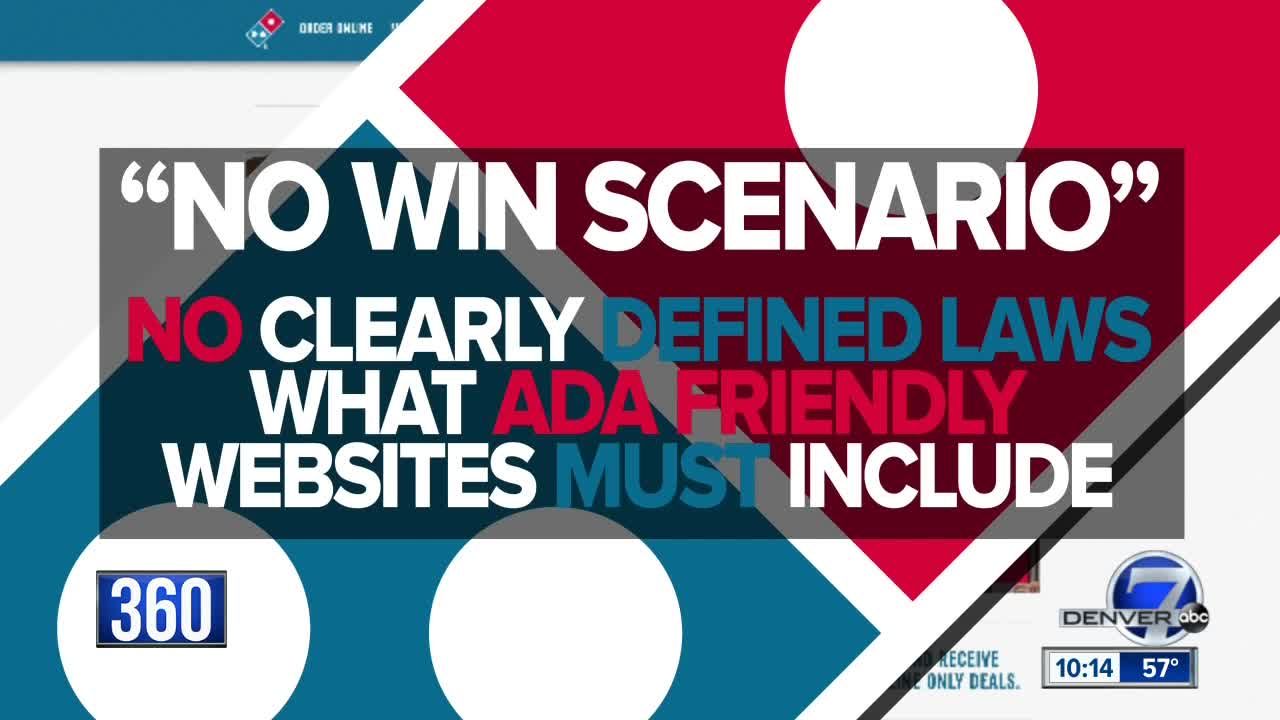 Editor's Note: Denver7 360 stories explore multiple sides of the topics that matter most to Coloradans, bringing in different perspectives so you can make up your own mind about the issues. To comment on this or other 360 stories, email us at 360@TheDenverChannel.com . This story will air on Denver7 News 10 p.m. on Tuesday. See more 360 stories here.

DENVER -- The U.S. Supreme Court reconvened Monday for its new term and abruptly announced it would not take up a case that questions how the Americans with Disabilities Act is applied to technology. The case can now move forward through the lower courts.

The case stems back to a 2016 lawsuit against Domino’s by Guillermo Robles, who is blind, and who claims he could not order a pizza using the company’s website or mobile site because it is not accessible.

He wants the website to be made accessible to people with different types of disabilities. Domino’s argues that the Americans with Disabilities Act doesn’t specify anything about internet sites being made accessible.

Before lawyers could even begin to argue the merits of the case, however, a judge dismissed the lawsuit in 2017. Judge S. James Otero ruled that while ADA Title III applied to the internet, the Department of Justice has not laid out clear regulations for it, so the case violates the pizza company’s due process rights.

Domino’s sells more than 2.5 million pizzas every day. Along with ordering in the store and over the phone, people can text their order, they can use a voice-activated device like Alexa or even order via Twitter.

According to court documents, since 2017, both the Domino’s website and its mobile app have included some ADA-friendly features. The banner directs visitors to a telephone hotline where an operator can take their order. Domino’s argues that the ADA does not apply to websites.

“Title III says nothing about the accessibility of websites or applications on smartphones, whether standing alone or in connection with restaurants, stores, or any other brick-and-mortar establishments,” court documents from Domino’s read.

Beyond that, Domino’s argues that the Department of Justice has not adopted internet accessibility regulations to give companies guidelines for what is required of them. The company’s website is somewhat accessible to people with disabilities.

However, it does not follow a standard called WCAG 2.0, which is a privately developed standard for what an accessible website should include. The standard has not been formally adopted by the government and Domino’s argues it shouldn’t be held to it. It wants the legal system to decide what its burden of accessibility should be.

In addition, Domino’s argues that these types of lawsuits are becoming more common and unless the legal system helps clarify the rules, companies will get bogged down with so-called drive-by or surf-by lawsuits.

In 2018, there were roughly 2,250 lawsuits claiming ADA violations based on website inaccessibility. The number is nearly triple from the year before, according to the court documents. Domino’s claims many of the lawsuits are filed by repeat litigants.

“Even if a business or nonprofit tries to comply, nothing stops the next litigant from suing again by claiming that these attempts failed to satisfy elusive accessibility standards,” the court documents say.

Domino’s is now waiting for the legal system to step in and decide what the burden on businesses to accommodate different disabilities should be.

“Unless this Court steps in now, defendants must retool their websites to comply with Title III without any guidance on what accessibility in the online environment means for individuals with the variety of disabilities covered by the ADA,” the court documents say.

Jesse Mutzebaugh has built an entire business around creating accessible websites for different companies. He helped redesign the website for the city of Colorado Springs to make it more accessible and says it took about six months to make the change.

These types of websites are not only accessible to people who have issues with their vision but also those who have hearing loss or who have mobility issues and who cannot move a mouse easily. Because of that, websites can feature different levels of accessibility.

“There’s no black-and-white answers on what it is and is not accessible,” Mutzebaugh said.

Over the years, he has noticed that more and more websites are becoming accessible and it has become easier for developers to do so.

An ADA-friendly website does not look different from other ones; much of the work happens on the back end, where most internet browsers likely wouldn’t notice.

Creating an ADA-friendly website has also gotten much easier over the years. Building a website that is accessible from the ground up is easier to do that fixing or reworking one that already exists.

“If you already have a very complex website and place and you need to go back and mess with the foundation, that’s really expensive,” Mutzebaugh said. “A lot of times it’s just as expensive to re-create your site from scratch as it is to go in and fix things.”

The fixes can range from $1,000 to $1 million based on how complex the website is. For websites that are simply informational pages, which is the majority, the fixes will be on the lower end. Some smaller businesses might also be able to receive a grant to help make their website more accessible.

For more personalized websites with features like videos, pictures and customizable options, the fixes are more expensive.

Court documents show that the fixes for the Domino’s website would cost about $34,000 for the company.

“We can guess that taking this all the way up to the Supreme Court, they’ve spent magnitudes more trying to fight this,” Mutzebaugh said. “So, the issue here with Domino’s is not a matter of how hard this is to make accessible. They’re thinking long-term as a business what other implications does this have.”

The dollars and sense of accessibility

There also might be an economic incentive for businesses that choose to make their websites more ADA-friendly. Part of the reason businesses might want to consider making the change has to do with lawsuits.

“There has been a 177% increase in lawsuits for website accessibility between 2017 and 2018,” said Dana Barton, the director of the Rocky Mountain ADA Center.

Beyond lawsuits, there is an opportunity for businesses to make money. According to the U.S. Census Bureau, one in five Americans lives with some sort of a disability.

As the population ages, more people are facing challenges with sight, hearing and mobility.

“In America, individuals with disabilities have $645 billion worth of disposable income. If you are not catering your website to make sure it’s accessible for people with disabilities, you are missing out on potential sales opportunities and revenue,” Barton said.

Ironically, when Barton began her role at the Rocky Mountain ADA Center, she discovered even their website wasn’t completely accessible and needed to implement some fixes. She decided to start from scratch and spend time making the website truly accessible.

Now, the group is helping businesses figure out how to make their websites more accessible, saying the most accessed webinar they’ve put on this year covered that very issue.

The next issue she believes companies are going to have to seriously consider is how to integrate accessibility into their social media platforms for things like live video streams.

For years, the city of Denver’s website was not ADA accessible. In 2017, the city reached a settlement with the federal government to remedy that issue and has been in the process of fixing it ever since.

Making the website ADA-friendly is a big undertaking for a city like Denver. Along with making changes to the approximately 25,000 pages that create the site, the city’s IT experts are also working to make 75,000 documents and images accessible.

“The City is also addressing more than 200 public-facing applications and approximately 30 additional city-owned websites (not including Denver Public Library and Denver International Airport) which the City owns and/or manages,” a spokesperson for the city said to Denver7 in a statement.

The city is now going over each and every record online to ensure it is ADA accessible.

The idea of applying an older law to emerging technology is not a new debate in the legal system.

Iris Halpern, an attorney with Rathod Mohamedbhai, LLC says one example of this is police needing warrants to access cell phones.

“You’re entitled to certain due process rights and the right to privacy in your cell phone before it is used against you,” Halpern said.

In Riley v. California, the Supreme Court considered the question of whether police officers have a right to search through someone’s cell phone without obtaining a warrant first.

The court unanimously decided that cell phones hold private information about people’s lives and, therefore need a warrant for police to search.

“There’s been this rapid expansion of the types of ways that people have been using the Internet,” Halpern said. “The courts have been very slow to address these kinds of rapid changes in technology and society.”

Halpern believes the legal system may need to make a similarly impactful decision in this case.

“This isn’t a new process, it is a difficult and complex one, but it has certainly been done many times before,” she said. “The ADA won’t mean anything if we don’t find a way to understand how to get it to apply in the modern world.”

The director of legal services for Disability Law Colorado, Alison Butler, also believes this case will have lasting effect on states like Colorado. The way she sees it, a website is an extension of a business itself and should be made equally accessible.

If the case doesn’t go the way disabilities advocates are hoping, Butler says groups like hers might decide to turn to Congress to update the ADA for the internet age.

Halpern isn’t sure legislation is the clear solution.

She believes it will take a combination of laws and court decisions.

The future of the ADA

Paul Simmons, who is deaf, says overall, he has noticed that websites are becoming more accessible, but there’s still a long way to go.

Simmons gets frustrated when a video of a long meeting is posted online without closed captioning. Other videos that are captioned sometimes make silly mistakes that make the overall context of the video difficult for Simmons to understand.

For now, Simmons and the millions of other people living with disabilities in the U.S. are finding workarounds for websites that are not ADA-friendly as they wait for the legal system to potentially decide what the rules are when it comes to the internet.