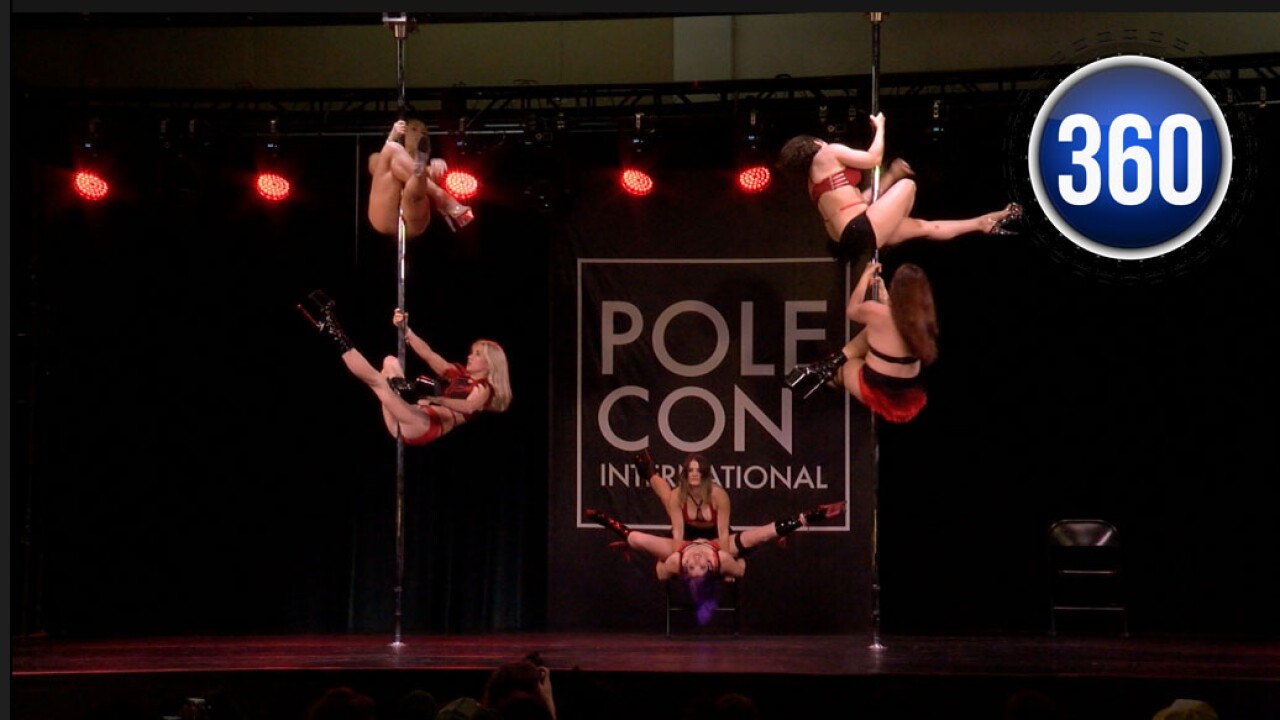 Competitors show off their skills at the International Pole Competition at the Westin Westminster on January 6-9, 2019. 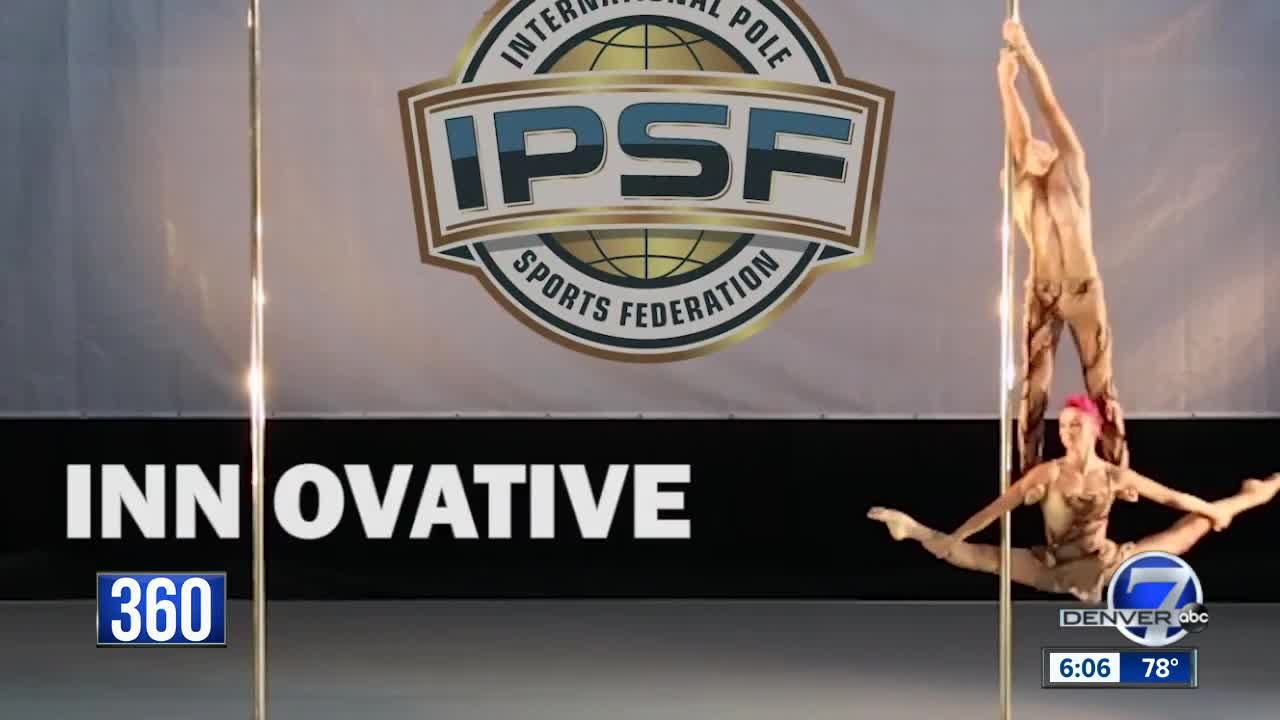 DENVER -- A pole dancing convention took over part of the Westin Westminster over the weekend, drawing in hundreds of participants from across the country and around the world.

PoleCon features competitions, exhibitions and workshops for a sport that was once in the fringes but is now moving mainstream. There are now fitness classes in studios across the country as well as international competitions.

For years, some pole dancing organizations have been pushing for the sport to be added to the Olympics. However, not everyone agrees with the move.

How to join the Olympics

Adding a sport to the Olympic games is a long and complicated process. For most sports, it takes years of earning international recognition and overcoming hurdles to prove itself worthy of an Olympic bid.

Currently, there are 28 sports in the Summer Games and close to 11,000 athletes expected to compete in 2020. The sports that will be included in the 2020 Games have already been set.

Surfing, skateboarding and rock climbing are three of the most recent sports to be added to the Olympics. Numerous others, like squash, are still in the process of being considered.

“To get in it requires appeal to the International Olympic Committee’s target group, which is teenagers and young 20-somethings and that’s why surfing is in and squash is not,” Abrahamson said.

Breakdancing, meanwhile, is being fast-tracked due to its popularity in the 2018 youth Olympics and could end up in the 2024 Games.

In 2017, pole dancing passed its first big test into a possible Olympics bid when it was granted observer status from the Global Association of International Sports Federations. The year before, the organization behind the push submitted its application to the International Olympic Committee (IOC) for recognition.

It is now working on adding more federations in countries around the world to prove it has a broad, international appeal. It is also working on earning recognition from other sports organizations. However, there is still a long way to go before the sport could end up in the Olympics.

For some in the pole dancing community, the push to add the sport to the Olympic Games is long overdue.

Groups like the International Pole Sports Federation (IPSF) have worked for years to not only legitimize the sport but to come up with a strict set of rules and point system to govern it.

In the end, the IPSF came up with a 147-page book laying out the rules for everything from singles and doubles competitions to choreography presentations to anti-doping policies.

IPSF is now one of the main driving forces behind the sport’s Olympics push.

“It could happen in my lifetime,” said Colleen Jolly, the CEO and owner of the International Pole Convention.

Jolly says pole dancing takes a certain amount of athleticism that many people don’t tend to associate with the sport.

“It’s absolutely demanding,” Jolly said. “We have folks who come from a gymnastics and dance background and what they bring to this is all of that hard-core training.”

There are also many different facets for pole dancing. Some see it as a sport where fitness and strength are key. Others see it as an artistic expression.

“The pole community is surprisingly diverse,” she said.

Jolly sees it as similar to snowboarding, when the half-pipe was introduced into the Winter Olympics since there are so many variations and opportunities to make up new styles or moves.

It also has a broad application, not only for female competitors, but men, the youth and those with disabilities.

“We had a disabled pole dancer show case, we call it para pole,” Jolly said.

If pole dancing does eventually end up in the Olympics, Jolly hopes it will help de-stigmatize the sport and the negative connotations associated with it. She’s also hoping it will inspire more people to try pole dancing.

“It’s not just about having an event in a competition, for right now it’s about getting the next generation of people involved,” she said.

While some pole dancers are hopeful the sport will end up in the Olympics, others would prefer for it to stay out of the mainstream.

“I would not like to see pole go to the Olympics myself,” said Nia Burks. The owner of Butter and Filth pole studio.

Burks is a former stripper who started pole dancing in 2001 mainly as a way to earn money.

“At the clubs, it was strictly business, entertainment, working for men, for money, with absolutely no concern on my end for athleticism or art for that matter,” she said. “Stripping took a lot from me.”

For years, like much of society, Burks associated pole dancing with something too taboo to talk about.

“I think that it can be a tool that represents negativity in a culture in the way that sex and commerce interact in sex work,” she said.

It was only after she retired that Burks started to see a more artistic, sports-based side of pole dancing. She was invited to attend a pole fitness class and eventually became an instructor and owner of her own studio.

“Because it was so deeply ingrained in the strip club world, I had no idea that anyone would ever touch a pole because they wanted to, that was unfathomable to me,” Burks said.

These days, she considers herself an artist who uses pole dancing as a form of creative expression and healing. That’s the same reason she doesn’t want to see pole dancing become an Olympic sport.

One of Burks’ favorite aspects of pole dancing is the fact that there aren’t rules governing how she can express herself. She worries that adding it to the Games would water it down to a sport that’s more about science then style and self-expression.

“The more athletic, the more masculine, the more regimented we make it, the less we make it about women, their empowerment, femininity and their feelings,” she said.

She also doesn’t like the idea of a point-based system to rank the dancers.

“Compulsory angle point systems, if they were applied, what would happen to the soul (of pole dancing)?” she wondered.

As a longtime Olympics columnist, however, Abrahamson does not believe pole dancing has a chance of ever being incorporated.

“Pole dancing’s chances of being admitted into the Olympics or somewhere between zero and none,” Abrahamson said. “It’s not going to happen.”

In an op-ed published on his sports website, Abrahamson laid out a myriad of reasons for why he doesn’t think it stands a chance.

Abrahamson doesn’t doubt the athleticism of the sport or the rigors it takes to perform. However, he says that is not the only consideration for what is accepted by the IOC.

A much bigger factor into which sports are added is the perception surrounding it.

“To say that there are a bunch of stereotypes around pole dancing would be kind,” he said.

Because there is still an element of sexuality associated with the sport, he doubts pole dancing will ever be able to shed its strip club image enough to be seriously considered.

Beyond that, the Olympics is working on its image in the wake of the #MeToo movement and previous scandals, like the sexual abuse of American gymnasts by a trainer.

“The IOC is very sensitive to public opinion at a time when it is trying to be a forceful advocate for gender equality,” he said.

Abrahamson doesn’t believe adding pole dancing as a sport would help with that advocacy effort.

He’s also not convinced there is a broad enough international appeal or enough proof that men are interested in participating in the sport for it to be a serious Olympic contender.

While some groups continue to push for pole dancing’s inclusion, others say the exposure the Olympic bid itself is creating is enough.

“We’ve been so underground for so long that I think even the road to the Olympics and getting that attention on pole dancing as a thing is really good for us,” said Amy Guion. “Whether we get there or not, I don’t actually think it matters all that much. It’s really the attention that journey is drawing to the industry.”

Guion has been a pole dancer for 12 years and says she first tried it as a joke for her birthday. After her first class, though, she started to see the possibilities. She is now the president of the Pole Sports Organization. Guion sees it as an art and likes the freedom it offers.

“I grew up doing ballet very seriously and ballet is very structured, so you have choreography that’s given to you, there’s a format, there’s a technique,” Guion said. “With pole dancing, when I went to my first class they were like, ‘Oh we’re going to do it freestyle.’”

She sees it as something similar to figure skating where there are technical marks to meet with artistic stylings. For her, the storytelling aspect is the most important part.

Guion believes society still has a long way to go to accepting pole dancing as a serious sport and part of that has to do with how it sees sexuality.

“I don’t think that’s very accepted in our culture for a woman to be sexy and have ownership of her own energy in that way,” she said.

In the end, pole dancing still has a long way to go before it could end up in the Olympics. However, advocates say they aren’t going to give up no matter how long it takes.

For now, pole dancers will compete in smaller events like the PoleCon that happened in Denver and try to spread awareness about what the sport has to offer.