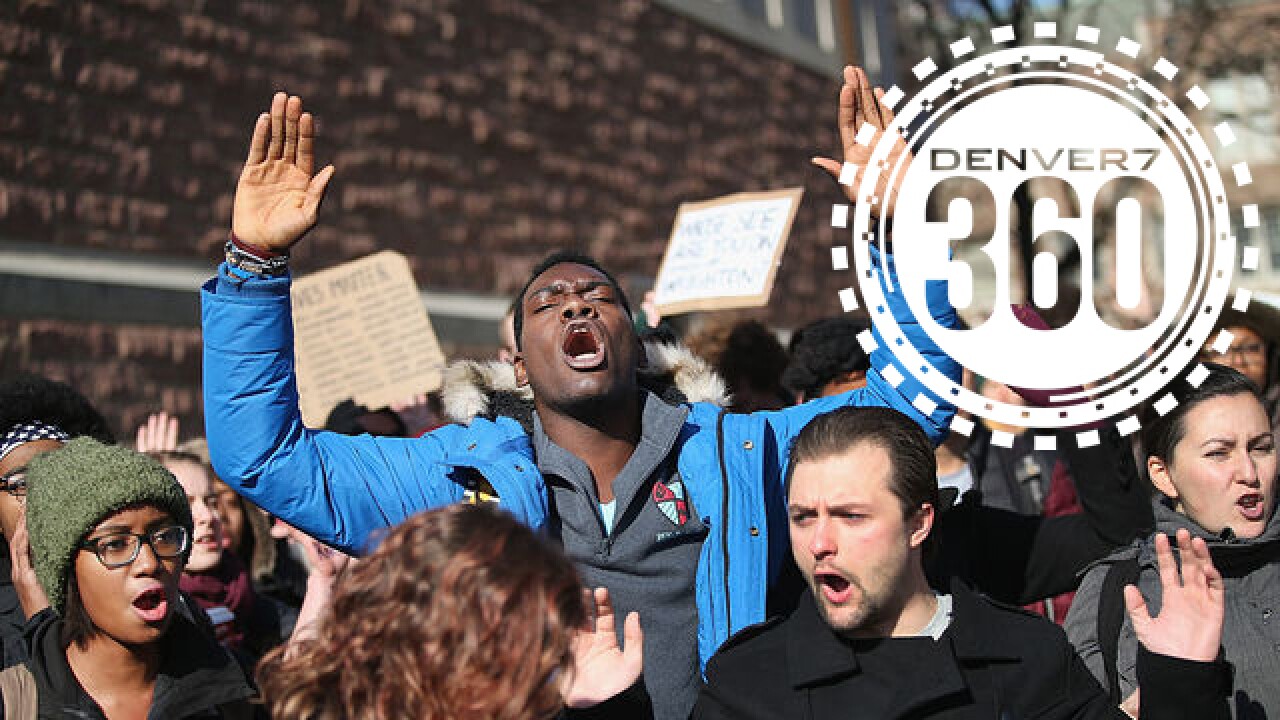 Scott Olson/Getty Images
ST LOUIS, MO - DECEMBER 01: People protest at Washington University to draw attention to police abuse on December 1, 2014 in St. Louis, Missouri. The protest was part a nationwide action calling for workers to walk off their jobs and students to walk out of their classes to call attention to the perceived miscarriage of justice sparked by the August 9th death of Michael Brown in nearby Ferguson, Missouri. Brown, an 18-year-old black man, was killed by Darren Wilson, a white Ferguson police officer. When the grand jury announced on November 24, that Wilson would not face charges in the shooting rioting and looting broke out throughout the area leaving several businesses burned to the ground. (Photo by Scott Olson/Getty Images) 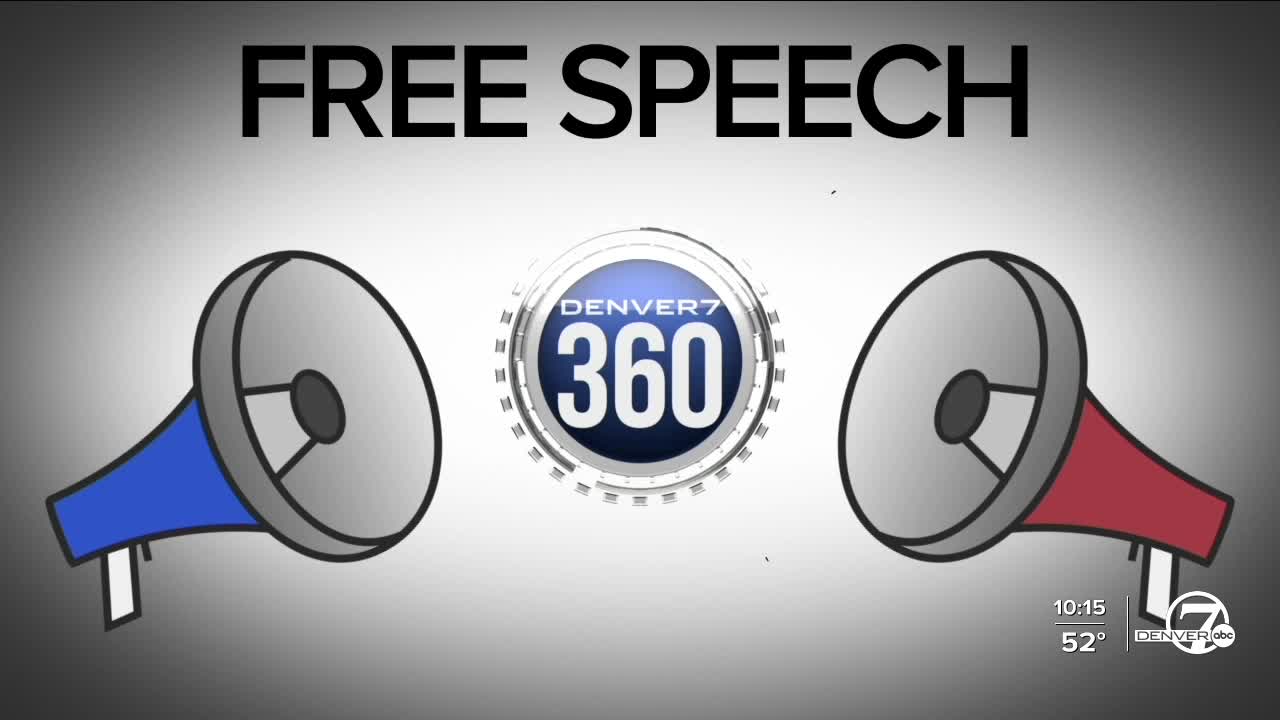 DENVER -- How broad is free speech? Are there limits? A lot has been made of free speech lately.

Last week, lawmakers on Capitol Hill in Washington, D.C. grilled the most powerful big tech companies in the world about censorship.

Several viewers on both sides of the aisle have emailed and called Denver7 to say they don’t feel comfortable expressing their opinions or beliefs in their own neighborhood with yard signs and other expressions of support for a particular candidate or ballot question.

So, we’re asking a few experts to weigh in. Is free speech under attack as a result of our deeply polarized nation? And if so, what is our responsibility to protect that right?

“Technology has certainly complicated this discussion,” said Dr. Tony Frank, chancellor of the Colorado State University System. “No one, whether it’s the chancellor on a university campus, the president of the United States or the CEO of a social media company gets to tell us who gets to speak on an important topic.”

“Who gets to decide what’s substantiated and what’s not?” Cole said. “That judgment is better left to us, the audience. The readers. These tech companies - Google, Facebook, Twitter - are so central to our way of life now, they actually function as public utilities, although they’re privately owned. It’s very thorny and complicated.”

Freedom of speech this election season also appears to be under attack on neighborhood streets here in Colorado.

“I feel like my freedom to express my support has been violated,” said Cathy Harlow of Aurora.

She recently put up a Trump sign in her yard.

“The next morning, I got up and it was laying on the ground. It was stomped on. There were foot-prints on it,” Harlow said. “I don’t agree, obviously, with my neighbors, but the last thing I would do was take their Biden signs out of their yard. I respect their opinion. A little rebellion came out in me, and I decided to order more Trump signs and a Trump flag that nobody could get to.”

Carla Angeles says the lack of civility is so bad this year, she doesn’t bring up politics with friends and family.

“We have no good candidate to choose from this year,” Angeles said. “There’s just so much hate and everything that I don’t really like to express to it a lot to people that I know because sometimes they don’t take it very well.”

The silencing of our neighbors and friends is a sad state of our society and sometimes dangerous violation of free speech.

“Congress shall pass no law abridging freedom of speech,” Frank said. “I think most of us are familiar with that.”

Frank recently wrote, “political discourse in this country has become increasingly negative, hyperbolic, and less based in reality.”

“We seem to be focused, almost exclusively, on our differences,” Frank said. “To me, as a layperson… no one tells us what to say. And importantly that means no one controls what we hear because the exchange of ideas is the lifeblood of thought and thought is the heartbeat of a democracy.”

Frank says no matter how much we dislike it – all speech must be protected.

Case-in-point, a situation he dealt with on the CSU campus in Fort Collins a couple years ago when he says a group of Nazi-sympathizers, by any reasonable definition, came to march in support of a speaker, while two Jewish community members questioned how the university could possibly allow it.

“To say, ‘no’ to that, to me, went against everything around free speech,” Frank said.

But, Frank says, along with allowing it came a huge responsibility of the University to denounce the marchers and stand with its “full weight and authority” in support those Jewish community members.

“And to make sure that the members of our Jewish community didn’t feel like they were standing alone,” Frank said.

While that situation turned out to be non-violent, we have recently seen how some hate speech can incite violence.

“I do think there is an uncivil war of words going on and occasionally, it’s bleeding over into actual violence,” Cole said.

Cole says the Lee Keltner shooting death outside the Denver Art Museum is an example of that. An unlicensed security guard for 9News was caught on camera shooting Keltner at a patriot rally. Cole says the media can sometimes stoke the flames.

“There are huge swaths of viewership that say, ‘Yeah, beat that guy up. Make him look ridiculous. Make fun of him,’” Cole said.

When tensions are high, people can be more dangerous.

“I think individuals should have the right to say whatever they want to, but they need to be responsible for what they say,” said Dr. Ryan Ross, associate vice chancellor for student affairs, equity and inclusion for the Colorado Community College System.

“’I want to kill a Black man,’ ‘I want to hang someone,’ ‘I want to lynch someone.’ Language like that should come with a consequence,” Ross said of those examples.

Ross says when we hear negative hate speech, we all have a responsibility to speak out against it.

“The voice of decency and morality will outweigh the voice of hate,” said Ross, who is also the president and CEO of the Urban Leadership Foundation.

The best antidote for false speech might just be more speech.

“I’m a big believer in what Jefferson said in that, ‘We should let error remain unmolested, where truth remains free to combat it,’” Cole said.

And then there is censoring of political speech because you disagree with the viewpoint of someone on the other side - a silencing that experts say could shatter our democracy.

“Once they learn something about you, you can build a relationship,” Ross said.

Frank recently wrote, “…stop and think about the beauty of that first amendment… (it) ensured civil rights marchers of the 1960’s had a voice… and allowed members of CSU’s women’s softball team in the early 1990’s to allege inequitable treatment… (leading) to Title IX compliance nationwide. Women’s suffrage, the Civil Rights movement, the Labor movement – all came from listening to voices that weren’t sitting at the table,” Frank said.

Giving voice to the voiceless.

“So that everybody’s lived experience can be heard,” Ross said. “It’s a moral responsibility. For so long, so many people who haven’t had a voice, haven’t been heard.”

“If you don’t allow that – you’re seeing the world from a narrow, distorted perspective,” Cole said.

And that highlights the commonalities Frank believes we can all draw on.

“America, to me, is always going to be an unfinished work as we move toward a more perfect union,” Frank said.

“Only through really courageous, honest and authentic dialogue, do we educate people through their ignorance,” Ross said.

“We simply need to take a step back, take a deep breath, remember that we’re all Americans,” said Cole. “That we’re going to remain one nation, after this election. And hopefully forevermore.”

“When Americans talk about things, we tend to get them right more often than not,” Frank said.

He says generations who came before us fought and died for this right.

“And anything we do that steps away from that, I think is unworthy of that sacrifice,” Frank said. “And as Americans, we’re better than that.”