Should parents allow privacy for their kids or monitor their activity online and elsewhere?

DENVER -- Here's a question for every family in Colorado and elsewhere: How much privacy do you allow for your kids and at what age? Can they be on a computer or phone without supervision? Turns out, a lot of you think differently on this topic which is why we are going 360 on your kids’ privacy.

When we think of privacy for kids or teens, our minds go right to social media, mobile apps and online activity. It’s all a big part of our world but we know it can be a scary place. A study from the Crimes Against Children Research Center a few years back, showed about 1 in 10 kids received an unwanted sexual solicitation.

But there's a law to help give parents more control. The Children's Online Privacy Protection Act requires commercial websites, online services and mobile apps to get the parents’ consent before collecting any personal information on kids younger than 13 years of age.

For dad Michael Chase, privacy is a privilege for his kids. His 7-year-old twin boys may have cell phones but they’re only for games.

"I give them a decent amount of space. I mean, I keep track of what they're doing without being physically present. Anything that Oliver downloads on his phone, I see on my phone," said Chase.

At age 10, the boys will be allowed to make calls on their phones. They'll get their privacy at age 18. 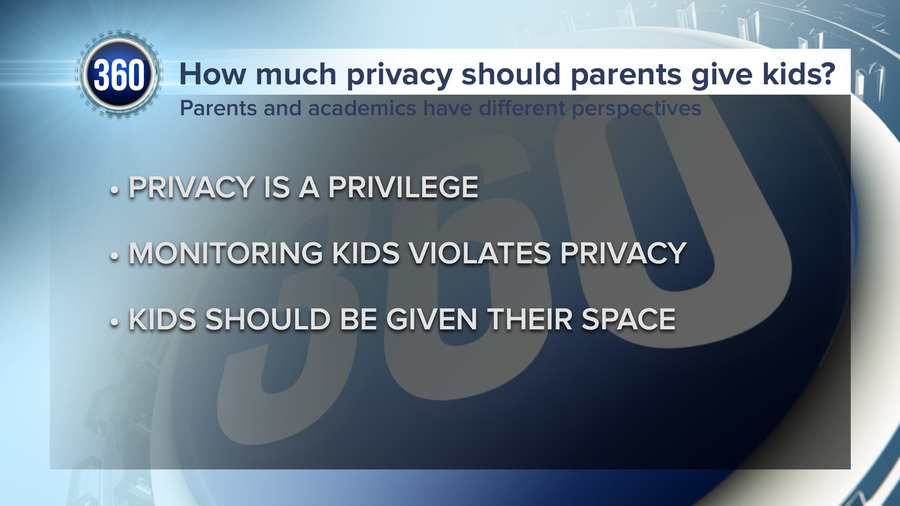 Technology has actually helped make monitoring your kids easy. Consider an app like Life360, for example, as it allows family members to communicate throughout the day and share their locations. But those are a waste, if you ask University of Colorado professor Amy Hasinoff.

"It’s much better to just start from communication, build a relationship, have an open dialogue," said Hasinoff, a professor of new media.

She said monitoring kids or teens, in any way, violates their privacy.

"You’re kind of setting up kids for this expectation that if someone loves you, they should be able to read all of your text messages," said Hasinoff.

Mother and grandmother Linda Wojcik didn’t have to worry about computers or social media when raising her kids. They’re adults now. Her method of parenting was giving plenty of space. For example, she didn’t insist on chaperoning them as teens. Honesty and communication were big factors in the relationships with her kids.

"I ended up with kids that if they did have a few drinks later in life at a party, they called me and said they're staying there. And that's what I wanted," said Wojcik.

She says it's still paying off.

"I’m best friends with my kids today. We have a wonderful relationship."