Should female lacrosse players be required to wear helmets like males? 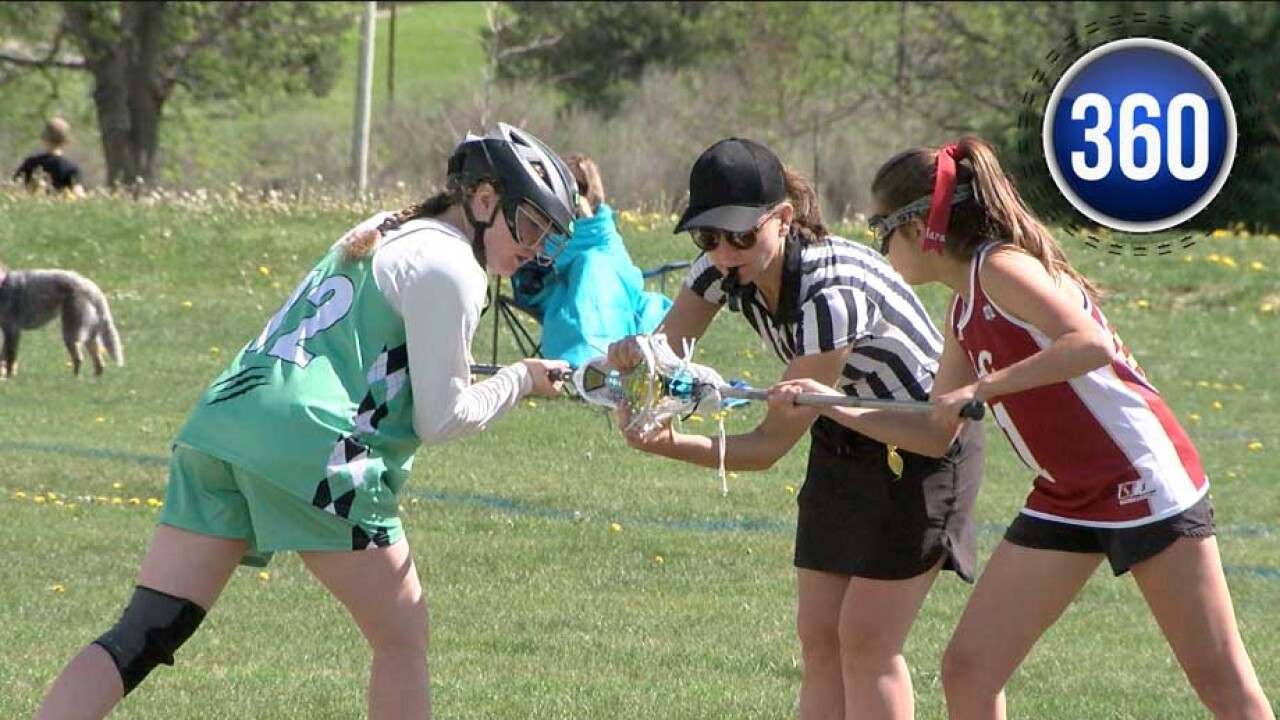 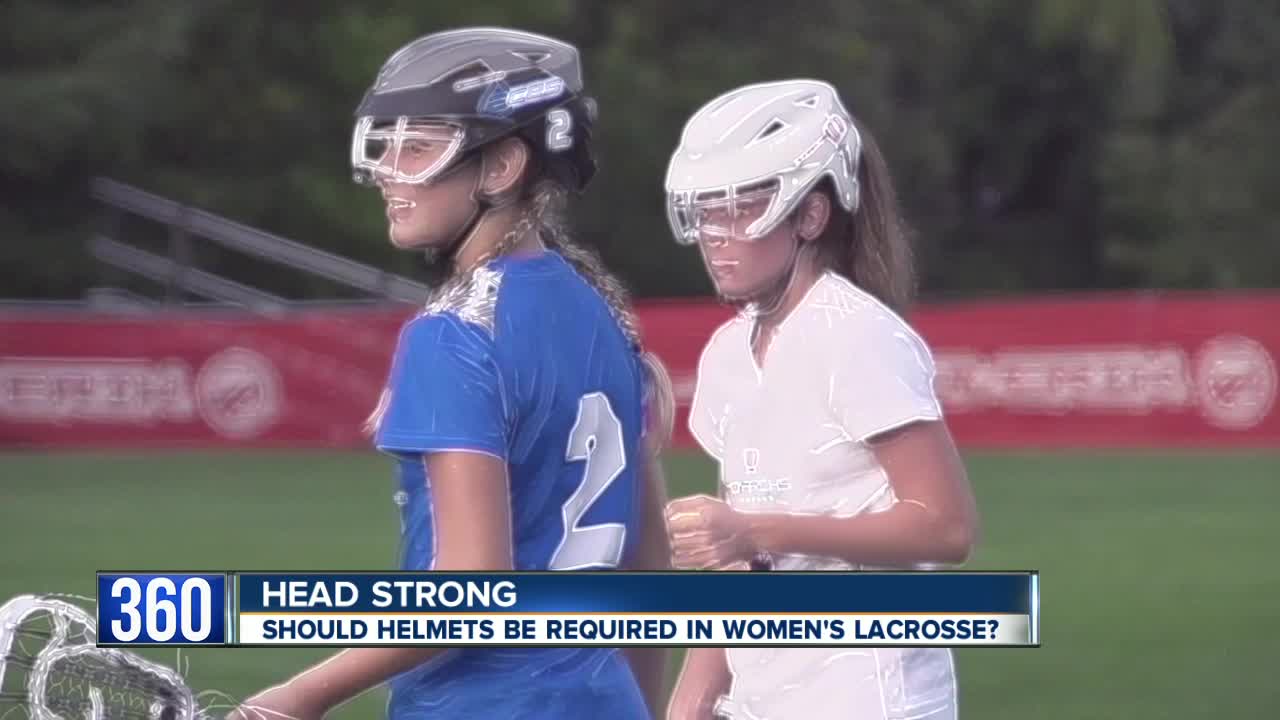 DENVER -- With the end of the year approaching, several high school sports leagues are gearing up for state championships this week, including men’s and women’s lacrosse.

In recent years, women’s lacrosse leagues have faced the question of whether they should make helmets a requirement.

The topic is contentious; some coaches and players believe helmets can help prevent concussions while others are adamantly opposed.

The rules of women’s lacrosse

There are no rules in the state of Colorado that require female lacrosse players to wear a helmet. Instead, the Colorado Girls Lacrosse Association mandates that player must wear eyewear and mouthpieces. Helmets are considered optional since women’s lacrosse is considered a semi-contact sport.

Men’s lacrosse, meanwhile, is considered a full-contact sport, so helmets are required.

While the sticks men and women’s lacrosse play with are different, the balls are the same.

“They are also, at the end of the day, playing with a cement ball. It’s covered in rubber, but it is still hard,” said lacrosse athletic trainer Lorin Sezer.

Sezer says the majority of injuries she deals with are either knee injuries or concussions.

“There are a lot of times where you have a collision and do you get a concussion out of that,” she said.

A 2015 study found that women’s lacrosse was second only to men’s football in concussions. Other studies suggest lacrosse is not as dangerous as other sports.

Some players and coaches are making the push for helmets as a added safety precaution.

Adelyn Wall has been playing lacrosse since she was 8. The now 13-year-old says she’s been hit in the head by either a stick or a ball nearly every season.

“I stopped this season a little early because of all of the injuries I’ve gotten,” Wall said.

She’s a strong supporter of the push to mandate helmets for all female lacrosse players.

Wall and her mother have been working to raise awareness about the dangers of the sport and pushing for helmets to become more normalized.

However, she believes the helmets should not be an option. She’s also one of the few people on her lacrosse team who supports the push toward helmets.

“It would be weird to show up and be the only girl on the team wearing a helmet,” she said. “You’ll get looked at, you’ll get judged definitely and people won’t want to follow you.”

While some parents and players support the idea of making helmets mandatory, others are adamantly opposed to the idea.

“I don’t agree with them it’s because I think, overall, they change a lot of the ways that people play the game and it makes girls all around more aggressive,” Ricker said.

Ricker says she has actually seen girls with helmets get injured more frequently because people play rougher against them since they have additional protection.

Beyond that, Ricker says the rules for women’s lacrosse are not made with helmets in mind, so adding helmets might force other changes.

Other opponents have said once helmets are added, the next step will be a pad-like hat, like it is currently required in men’s lacrosse, which will change the game.

Ricker would prefer for helmets to remain optional.

“I think it’s fine to have them approved because there’s some girls that are super concussion-prone or whatever, but I don’t like the idea of everybody wearing them,” she said.

Lacrosse helmets can also be expensive. Eyewear can cost around $50 per pair while helmets can be closer to $150 or more if they are not bought in bulk, adding an additional cost burden for parents and teams.

Some Colorado leagues are starting to make the switch toward helmets without state rules. Ryan Parker is the director of the girl’s lacrosse program for Castle Rock.

This year, the league, known as Raptors Athletics, has started requiring all players to wear helmets.

“The helmet will not prevent all concussions, but it will take some away,” Parker said.

The league often squares off against others that don’t require helmets, so one team might be wearing them while the other isn’t.

Part of the reason Parker wants younger players in particular to wear the helmets is because they are still learning the ins and outs of the game as well as things like ball and stick control.

Teaching younger players the right techniques to use is part of the solution to make sure young players aren’t injured due to inexperience. However, Parker believes the other part is protecting them with the right gear.

“It’s on us as coaches and parents to make sure that the girls are safe,” Parker said. “The helmet is just going to get an extra layer of protection of protection.”

Parker says he understands that the concerns that helmets might change women’s lacrosse, however he doesn’t believe that is a good enough excuse to not require helmets.

“Does the safety trump tradition or does tradition trump safety? You tell me,” he said.

While the Castle Rock league is making the switch, many other leagues across the state are not.

Justin Silverstein is the treasurer of the Colorado Girls Lacrosse Association and a coach for a local team. He says the sport is much safer that some might believe.

“I’ve actually seen far less injuries than you would think,” Silverstein said. “There is an emphasis in this game really to keep the stick away from players heads generally.”

He says he still hasn’t made up his mind about whether he supports the move toward helmets and he, too, is worried about players becoming more aggressive.

For now, he’s waiting to see how other leagues incorporate helmets to determine whether that is something he wants for his team.

“I think it will take a little more time for people to get an understanding if they’re as safe as people want them to be and if they make a game safer, versus causing some unintended consequences,” Silverstein said.

However, the fact that other leagues are starting to make the move is making him feel more comfortable about the idea.

The issue of wearing helmets in women’s lacrosse can be a divisive one. In the end, parents, coaches and players agree that lacrosse should be a safe and fun sport for young girls to enjoy, they just disagree on the best way to make it safe.