Copyright Getty Images. All Rights Reserved.
Getty Images
If you&#39;ve flown out of DIA recently, you probably know there are plenty of added headaches with the construction of the Great Hall and aging facilities. While at the same time, seasoned travelers know it could be worse. 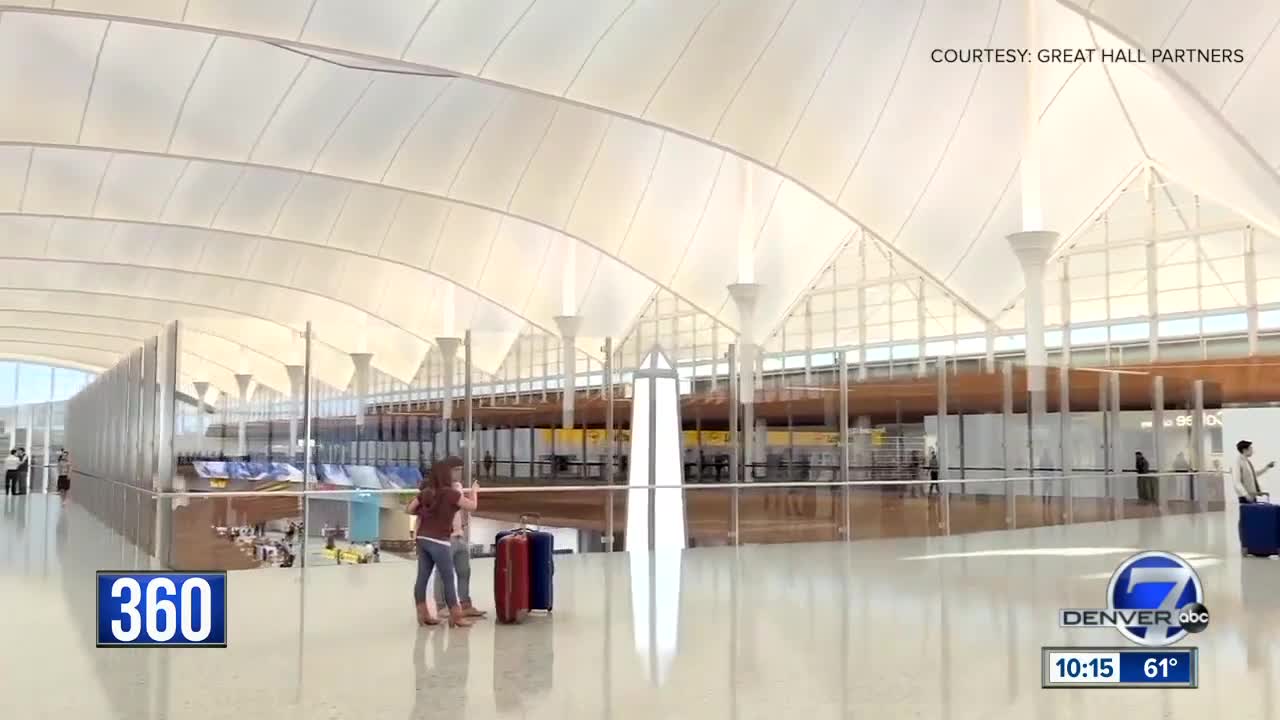 Editor's Note: Denver7 360 stories explore multiple sides of the topics that matter most to Coloradans, bringing in different perspectives so you can make up your own mind about the issues. To comment on this or other 360 stories, email us at 360@TheDenverChannel.com. This story will air on Denver7 News at 10 p.m. on Wednesday. See more 360 stories here.

DENVER – Scrutiny started early on, when Denver announced its intent to sign a 34-year deal to finance, renovate and run concessions for a massive renovation at the airport’s Great Hall.

The 15,000-page contract, worth $1.8 billion, outlined the agreement between the Denver International Airport and its partners, but even that document couldn’t prevent a very public unraveling. The deal ultimately fell apart 13 months after the construction project broke ground, leading one former council member to question if it ever should’ve been approved in the first place.

“Well I can’t say I couldn’t see this coming,” said former councilman Rafael Espinoza. “I do think that it’s a project we can deliver better locally, and we weren’t getting anything of real value with the partnership and Ferrovial.”

Espinoza is talking about the city’s decision to use a model referred to as a public-private partnership. It is also called “P3” for short and is defined as an agreement between a government agency and a private-sector company. The deals are typically long-term in nature for the purpose of financing, building and operating complex projects.

In the case at the airport, the Great Hall inside the Jeppesen Terminal would undergo a renovation but the majority of the risk and financing would be provided by the Great Hall Partners. A company called Ferrovial Airports would help take on that risk in exchange for operating the concessions after construction was complete.

DIA sent out an email update about the Great Hall project that shed some more light on the decision to use the P3 model. It said, "We approached the project through an innovative public-private partnership with Great Hall Partners, not for the money, but for their expertise and to transfer the risk of constructing within and operating 24-7 facility."

It is still unclear how much it will cost to end the relationship. Denver7 reached out to DIA for comment on this story and a spokesperson said, “There has been no determination on cost yet. There is still a lot of work to do for them to vacate the site before we will have final numbers.” She added that Great Hall Partners is still closing out and on-site until November.

The split has continued to raise questions about the use of public-private partnerships.

"For me, it raises questions about our use of public-private partnerships going forward. We have a new office of P3 and it really makes me pause to say with the failure of this one, is that a route we want to go down for other mega-projects?” said Councilman Kevin Flynn.

The city of Denver recently created an office dedicated to evaluating projects in order to determine if the P3 model would be a good fit in those cases. Denver’s mayor believes that office could’ve actually prevented the situation at the airport through a higher level of scrutiny.

"That P3 office, quite frankly, I think would have helped inform this project on some things that we were challenged with. So, I think we’re in a better position to evaluate partnerships, and partnership setup and the framework of those deals going forward,” said Mayor Michael Hancock.

CU Denver’s Dean for the School of Public Affairs Paul Teske the P3 model is commonly used to fund roads, like the construction of toll lanes on U.S. 36 and recent reconstruction.

One thing struck him as odd about the airport deal was the length of the contract.

"When it goes bad, I think it gets worse because they’re not just a contractor, they’re a partner and you have to unravel all of those elements,” said Teske.

In the weeks since the Great Hall deal fell apart, the Denver area has seen other issues with public-private partnerships. The Central 70 expansion is facing delays after ongoing discussions about construction of a railroad bridge that will go over the interstate.

There is also questions over responsibility in Westminster, where U.S. 36 is under construction after a hole opened up in the highway in July. A company called Plenary Roads Denver manages the highway but was not involved in the design or construction. It is still unclear who will end up paying for the damages.

Despite any questions about the use of public-private partnerships, Teske does not think the model is going away. He thinks we will actually continue to see it more.

“I think we’re going to continue doing it. It’s hard for government to raise the capital for these giant projects and in a growing state like Colorado. We need more infrastructure; we need to repair the infrastructure,” he said.