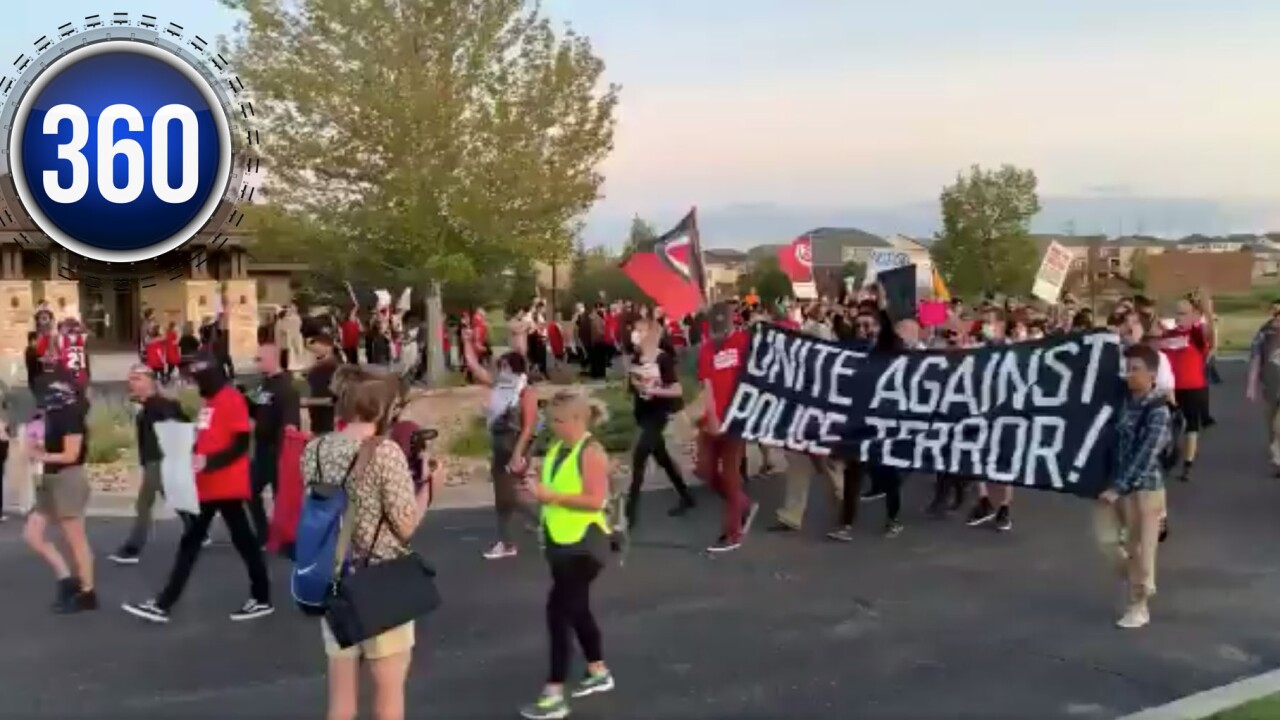 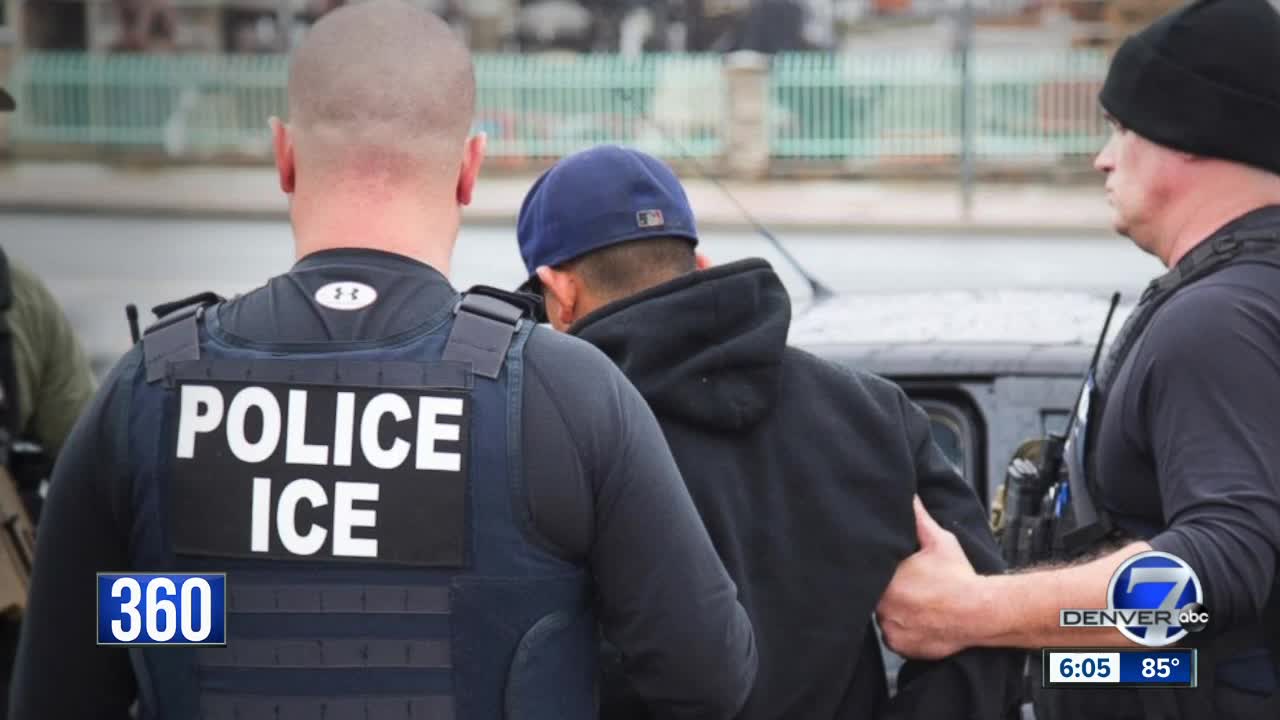 AURORA, Colo. -- The Aurora immigration detention facility is no stranger to protests. Demonstrators come to speak out against the treatment of undocumented immigrants and the agency that puts them there, Immigration and Customs Enforcement.

Since 2003, ICE has been tasked with enforcing immigration law. In recent months, however, the agency has faced scrutiny for separating families, detaining children and treating immigrants inhumanely.

On Thursday, protesters took their message to the home of an ICE employee, demonstrating throughout his neighborhood.

The protest comes the same week the American Civil Liberties Union released a scathing report about the GEO immigration facility in Aurora, accusing it of abusing and neglecting detainees.

The acting field office director of ICE says his agency is misunderstood.

“We do our job with professionalism and we do the job the way that we’re supposed to do it,” John Fabbricatore said. “What we do for the community is a good thing. We remove criminal aliens.”

Fabbricatore says the agency spends a lot of its time and resources trying to identify and detain the undocumented immigrants who have committed a crime.

“Over 85% of those that we target and arrest have been convicted of a crime or have been charged with a crime,” he said.

ICE has a task force agency that focuses on arresting undocumented immigrants who sell drugs. It also goes after human traffickers, people who have committed sex crimes and others with serious criminal backgrounds.

During a recent operation, Fabbricatore says ICE detained 97 undocumented immigrants in the Denver area who were involved in a heroin ring.

However, new state and local laws have made operations of this nature and cooperation between agencies difficult. Many agencies are now being directed not to work ICE or alert it about undocumented immigrants it comes across.

Fabbricatore says at the end of the day, ICE agents are trying to protect the public by removing dangerous people.

“For ICE to go away would be a big hole in the community, especially for law-enforcement,” he said.

He insists his agents are only doing their job by enforcing the law and that if people don’t like the way the law is written, they need to reach out to lawmakers.

“If people want changes in the immigration law, if they want us to do something differently, they need to look to their congressmen and women and tell them exactly what they want that law to be and then we will enforce that,” he said.

Time for a change

Abolish ICE protest organizer Matthew Wozniak believes now is the time for a radical change. He wants to close down all ICE detention facilities and rethink immigration in the U.S. altogether.

“We want to get rid of the entire system,” Wozniak said. “We want to shut all of them down. It’s got to be kind of an all-or -nothing thing.”

Wozniak said he has been inside of the Aurora detention facility and has seen the conditions and heard horror stories for how people were treated.

“The employees there referred to the detainees as bodies,” he said. “That kind of casual, dehumanizing reference is happening at the very lowest employee level.”

Despite this, he doesn’t believe ICE agents or detention facility workers are bad people.

“I don’t think that people who work for ICE are necessarily intrinsically evil,” Wozniak said.

However, he doesn’t buy the ICE narrative that the agents are simply doing their jobs.

He also disagrees with separating families or detaining children, and he says the majority of the people inside the Aurora GEO facility are not criminals, they’re simply looking for a better life and are detained for doing so.

“There’s no reason we should be setting up a society where we’re excluding masses of people while so few have so much,” he said.

Neda Samimi-Gomez’s father was detained by ICE and kept at the Aurora detention facility in 2017 after living in the U.S. for more than four decades. Two weeks later, while in the custody of ICE, Kanyar Samimi died.

His family has been searching for answers ever since then.

“It’s frustrating, it’s confusing. To me there’s no reason why my father would have been picked up, that he would have been detained, and then to find out that he died in their care and no one can give me or my family and answer for months is frustrating,” Neda Samimi-Gomez said.

She still hasn’t gotten all of the answers she’s looking for. Samimi-Gomez says she wants ICE to understand that these detainees are humans with families. She doesn’t want another family to have to feel the loss of a loved one while in ICE’s care.

That’s why the ACLU is calling for transparency and accountability.

“One of the policy recommendations that we have is for legislators to create legislation and pass a bill or embrace policy that will allow the state to go into that facility on a regular basis and conduct inspections,” said Denise Maes, the public policy director for the ACLU of Colorado.

He believes the rhetoric against immigration enforcement comes and goes depending on the administration.

Spence said agents are harassed regularly when they are detaining an undocumented immigrant.

“I never really got physically threatened, just a lot of screaming and yelling and, ‘You’re Nazis,’ and so forth,” he said.

However, something he believes a lot of people don’t understand is that this job can be dangerous. Spence said he’s gotten in several car crashes as well as fights while chasing a suspect in order to apprehend them.

There was also a time when an alleged drug smuggler tried to attack him with a rock. It’s a side of immigration enforcement he says isn’t acknowledged as often.

Something else Spence says is overlooked is the fact that ICE agents help where they can. Spence would occasionally spend money out of his own wallet to help families out.

“I’d always go get big bags of popcorn for the kids and soda pops and stuff like that. I think, twice, I bought diapers,” he said. “We are nice people, honestly, we don’t look like it, but we are.”

Spence says agents understand that the reason these immigrants come to the U.S., for the most part, is to seek a better life. He stands by ICE’s assertion that it targets felons so they can be removed from the country.

“That’s after they commit the crime. Why not get rid of them when they’re first here? They won’t be committing the crime,” he said.

He supports the agency’s removal of non-criminal undocumented immigrants as well.

When they are in detention, Spence says he always tried to treat the migrants with dignity. On the other hand, he says human traffickers are the ones who deserve to be criticized for their mistreatment and abuse of undocumented immigrants.

Once, he found a refrigerator with 63 undocumented immigrants inside who were unable to breathe because of the conditions inside the truck.

“This stuff happens all the time. The smugglers don’t care, they’re in it for the money,” he said.

He understands that immigration enforcement isn’t going to be something everyone supports, however he says the agents are just doing their job and enforcing the law.

One administration after another has tried to find a solution to the question over immigration.

Some administrations have tried to crack down on the number of people coming into the U.S. illegally. Other presidents have tried a path of leniency and amnesty.

Ultimately, it will be up to lawmakers to decide how to move forward on immigration. For now, these groups just say they want their perspectives to be understood.