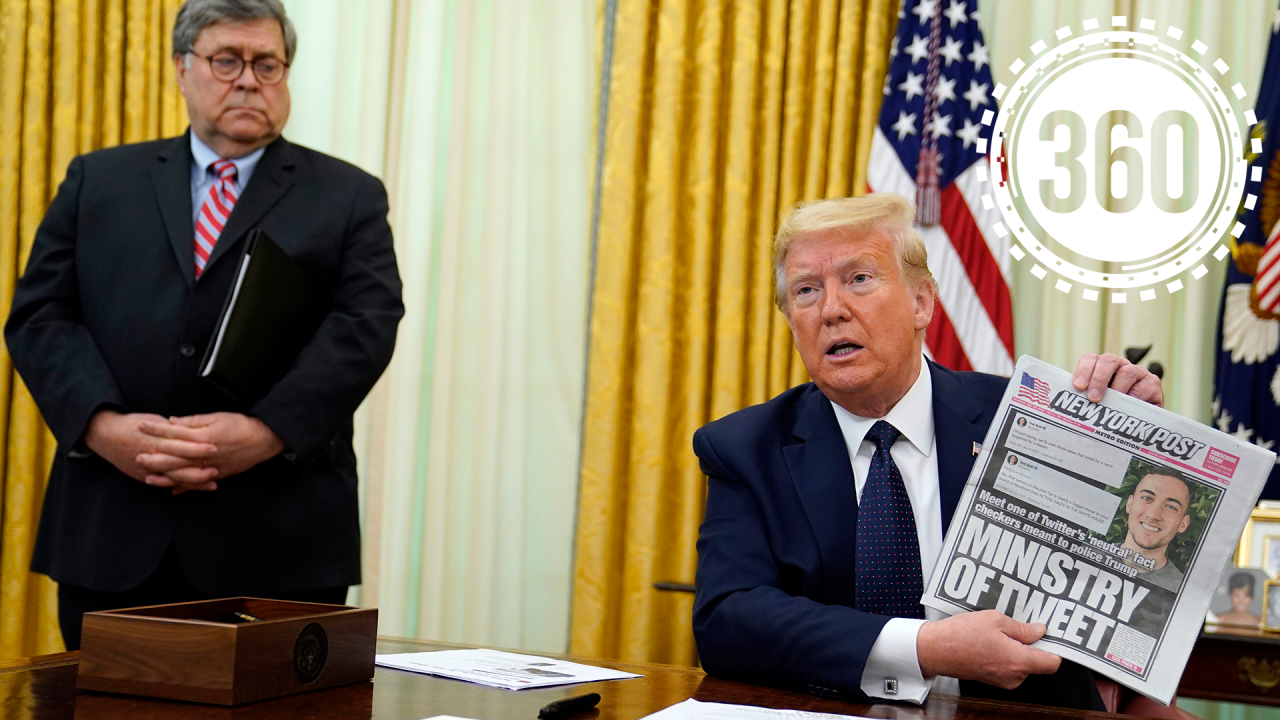 Copyright 2020 Scripps Media, Inc. All rights reserved. This material may not be published, broadcast, rewritten, or redistributed.
AP Photo/Evan Vucci/Denver7
President Donald Trump holds up a copy of the New York Post as speaks before signing an executive order aimed at curbing protections for social media giants, in the Oval Office of the White House, Thursday, May 28, 2020, in Washington, as Attorney General William Barr watches. 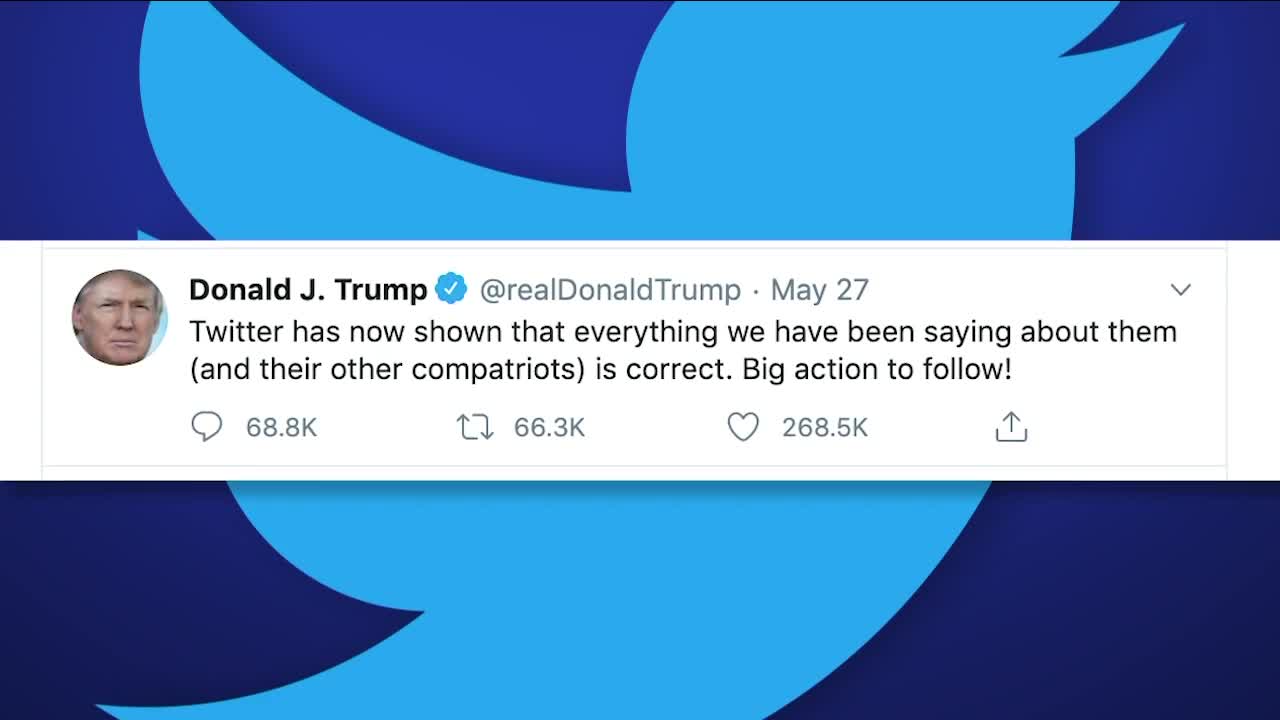 DENVER — President Trump signed an executive order Thursday that would roll back the liability protections for some social media companies.

The move comes the same week that Twitter added fact-check labels to two of the President’s tweets about mail-in voting.

The fact-check feature, which was unveiled on the social media platform earlier this month, added a blue exclamation point at the bottom of the president’s tweets and a link that reads, “Get the facts about mail-in ballots.” The link takes users to another Twitter page that highlights news articles refuting the President’s claims.

It is one of several new features social media sites have rolled out in recent years to monitor users.

In an online statement, Twitter’s safety team defended the action, writing, “We added a label to two @realDonaldTrump Tweets about California’s vote-by-mail plans as part of our efforts to enforce our civic integrity policy. We believe those Tweets could confuse voters about what they need to do to receive a ballot and participate in the election process.”

Quickly after those labels were added, the president started blasting the social media site, using the site to write, “Twitter has now shown that everything we have been saying about them (and their other compatriots) is current. Big action to follow!”

The president also dubiously accused the site of interfering in the 2020 election and stifling free speech online. He signed the executive order Thursday afternoon to roll back some liability protections for companies that stifle free speech or engage in censorship, though there are legal questions about his ability to do so.

Since 1996, internet providers, social media companies, bloggers and more have been offered certain liability protections under Section 230 of the Communications Decency Act.

In essence, Section 230 protects intermediaries (search engines, social media sites, bloggers and more) from being sued for something one of their users posts on their platform.

“All websites get complete immunity from any content published by a third party as long as they don’t edit it,” explained Derigan Silver, an associate professor in the Department of Media, Film and Journalism Studies at the University of Denver.

Without this section of the law, many experts have suggested that platforms like Google would not have been able to exist.

“If you’re Google or you’re a budding search engine and you’re linking to millions and perhaps billions of websites but you’re liable for every single website you link to – all of the content on every single webpage that turns up every time you do a Google search – if you could sue Google for that, how would Google ever exist?” Silver said.

Most other countries don’t offer similar protections, which is why many internet companies and social media sites are based in the United States.

There is only one instance where Section 230 has not protected a website; courts ruled that the website roommates.com would not be protected because it required users to break the law just to be granted access to the website.

Over the years, as the internet has evolved, there have been debates about whether Section 230 should be updated.

It has also been applied to human trafficking and sex trafficking websites. Some legal scholars have talked for the past couple of years about putting reins on the law and to whom it applies.

That is not what Silver believes the president is doing in this case, and he doesn’t believe the president has the legal authority to be able to issue this executive order.

“What he is suggesting is by labeling some content as true or false, websites are engaging in editorializing,” Silver said. “It’s only a federal court that can decide what editorializing means and what it doesn’t mean.”

Instead, Silver believes this was more of a media stunt to try to distract the public from the fact that the U.S. just reached the 100,000 deaths mark in the COVID-19 pandemic.

“What he is proposing is so far from the basis of reality that one has to question why he’s actually proposing it,” Silver said. “By doing this he’s actually giving himself free publicity that distracts from things he doesn’t want publicity brought to.”

Silver believes litigation costs for social media companies will begin to climb if the order is not overturned.

During a White House press conference Thursday, press secretary Kaleigh McEnany defended the president’s actions, saying social media companies have a history of silencing or censoring the voices of conservatives on their platforms.

McEnany pointed out that in March, Twitter used its new manipulated media tool for the first time. The tool was used to label a tweet from Dan Scavino, who works for the president.

“It is no coincidence that these two unbelievable interventions by Twitter were targeted against the president of the United States and one of the president’s top advisors. This is bias in action,” McEnany said.

McEnany accused the social media site of not applying the policies to other users and posts they believe were misleading, including a conspiracy theory about American soldiers spreading COVID-19.

She says the White House would like to know what goes into the decision-making process to use those tools.

“There are various shields in place that shield some of these social media companies and allow them to censor conservative users and we’re not able to see behind the shield,” she claimed, without evidence that "conservative users" were being censored. “We’re looking at ways to remove those shields to shed some light on what is happening and some of the decision making behind the scenes.”

During the executive order signing Thursday, the president said he would delete his Twitter account if there was a “fair press.”

Since the 2016 presidential election, social media companies have been working on ways to better monitor content on their sites.

This is not the first the first time the president has floated the idea of rolling back liability protections on the internet. A similar draft executive order came out several months ago.

“My instant reaction was here we go again,” said David Greene, from the Electronic Frontier Foundation.

However, Greene believes this time is different due to the timing and impetus for the executive order to be signed.

“This seems to be a direct response to Twitter’s act of putting a fact-checking mark on his tweet,” Greene said. “It seems to be very retaliatory against a private actor’s speech and so I think that’s highly concerning.”

While many social media platforms have been rolling out these tools, Greene believes the companies have been reluctant to use them against any politicians, including the president.

He describes the use of these tools as slow and inconsistent and says he would like to see them used more carefully and dependably.

Greene also doubts that the president has the legal right to enforce the executive order, but worries it could have an inhibiting effect to threaten platforms into complying.

Online, opinions have been split over the order. Some people said that they support the president’s move and believe conservative speech has been stifled by one company after another.

Others have condemned the executive order, including the American Civil Liberties Union, which said the move is unconstitutional.

Like several of the president’s executive orders, this one is likely to be in for a drawn-out legal battle in the courts.

"This EO is a reactionary and politicized approach to a landmark law," the company wrote. "#Section230 protects American innovation and freedom of expression, and it's underpinned by democratic values. Attempts to unilaterally erode it threaten the future of online speech and Internet freedoms."