Recalls are being used as political tool across the state 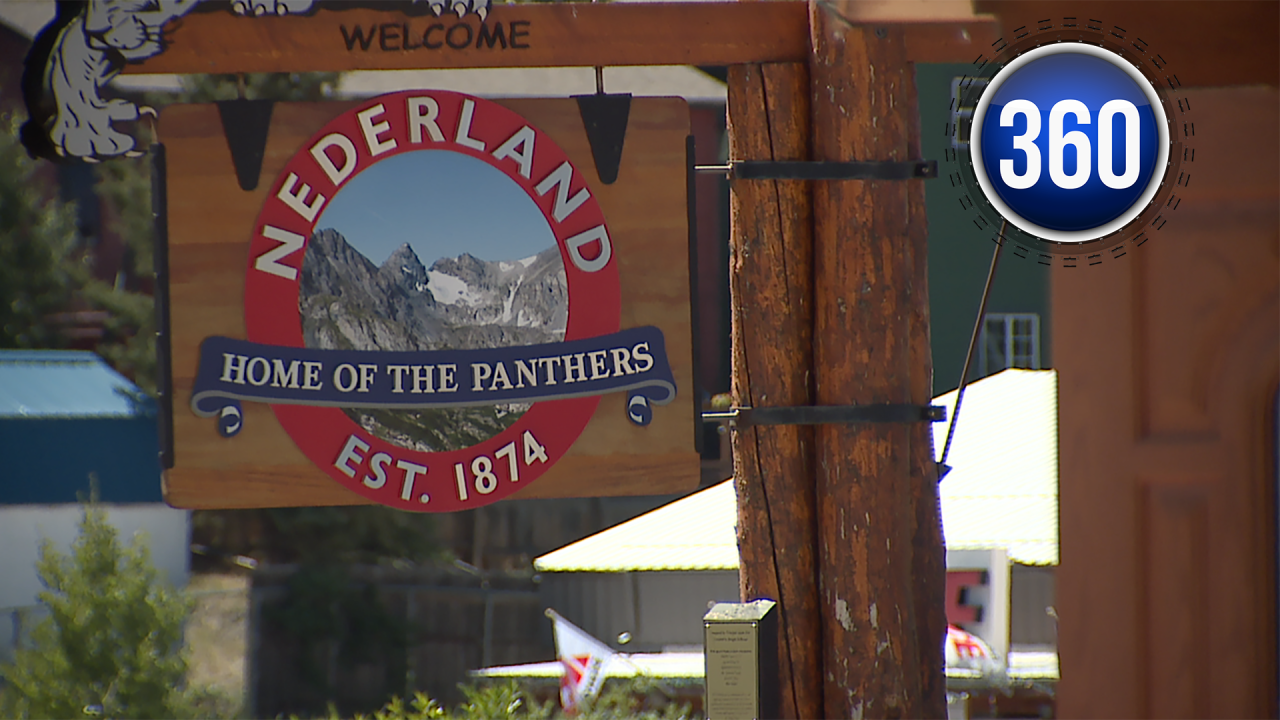 Copyright 2019 Scripps Media, Inc. All rights reserved. This material may not be published, broadcast, rewritten, or redistributed.
Denver7
From Elizabeth, to Gilpin County, to Nederland and the statehouse, there is a growing trend in Colorado to try and kick elected leaders out of office, with residents across the state launching recall efforts against politicians they are unhappy with. 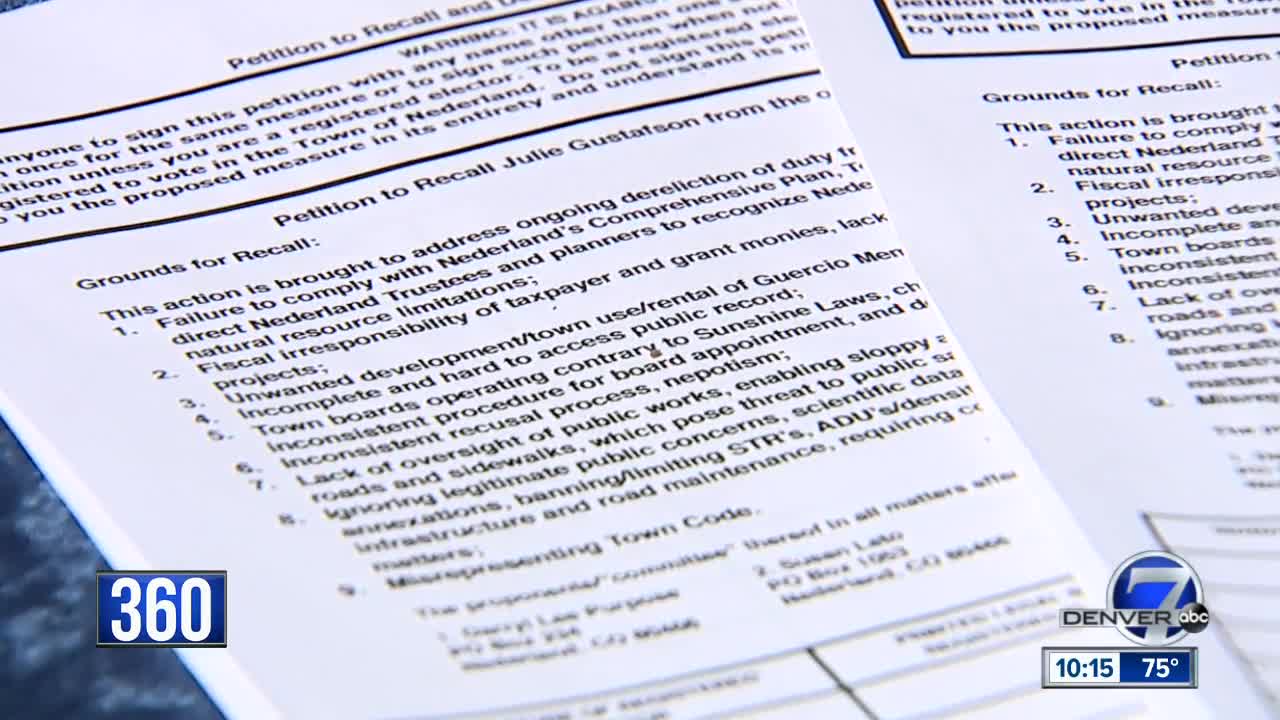 Editor's Note: Denver7 360 stories explore multiple sides of the topics that matter most to Coloradans, bringing in different perspectives so you can make up your own mind about the issues. To comment on this or other 360 stories, email us at 360@TheDenverChannel.com. This story will air on Denver7 News at 10 on Tuesday. See more 360 stories here.

NEDERLAND, Colo. -- From Elizabeth, to Gilpin County, to Nederland and the statehouse, there is a growing trend in Colorado to try and kick elected leaders out of office, with residents across the state launching recall efforts against politicians they are unhappy with.

Proponents of the governor's recall have until Sept. 6 to gather more than 631,000 valid signatures get a question on a statewide ballot.

A recall effort earlier this year against Rep. Tom Sullivan, D-Centennial, was dropped and another Democratic lawmaker resigned amid a recall effort.

While the movements to recall the governor and three Democratic state lawmakers require thousands of signatures to make the ballot, it takes far fewer to recall local elected leaders.

State statutes set the rules for the number of signatures needed in order to trigger a recall, which requires 25% of the entire number of votes cast for that officer during the last election.

In Nederland, proponents only need 58 signatures to try and recall Mayor Kristopher Larsen and 47 each for recall measures to be approved for both town trustees, Julie Gustafson and Dallas Masters. There are also recall efforts underway in the town of Elizabeth and city of Brighton.

Residents behind Nederland's recall say this is their right

Located just outside of Boulder, 17 miles up Highway 119, Nederland is an eclectic, close-knit mountain town best known for its Frozen Dead Guy and its reputation of being bit of a hippie haven.

"We have some real colorful people here, there's no question. It's kind of fun," said music shop owner Doug Armitage.

"We joke that the homeless-looking guy on the corner has three PhDs and two Grammys," said Nederland Mayor Kristopher Larsen.

But the small town of 1,500 people is now divided over politics.

On one side is a group of residents who say the town’s leaders are not in line with the town's direction. On the other side are the three town leaders they are now trying to recall.

"I'd say it started to reach a critical point 18 months ago," said May Jarril, one of the residents behind the recall.

Jarril said she believes her Nederland way of life is being threatened.

"It's not a personal vendetta. It's our right as citizens and we're very happy we live in the United States of America. God bless our country," she said.

Those behind the recall have a laundry list of issues with current leaders in town. From proposed short-term rental rules, which would require rentals be a person's primary residence, to a revision to the town’s intergovernmental agreement with Boulder County that dictates future annexations, to the to the canceling of Ned Fest — a town favorite.

"One of the people is a musician, he has his touring schedule. When he's not here he rents out his house. Under the proposed Airbnb requirements, he won't be able to make that work. He'll have to move," explained Jarill.

Jarril also said she and other recall proponents are fed up with what they say is their lack of say in the future of Nederland and how the town is hanging growth.

"Because the board is just impervious to comment, they don't take comment either present or past," she said. "We all know what's like to try to get through Aspen. Is that really what we want?"

Town leaders call it a waste of town resources

"Instead of being a part of the process, they can throw the wrench into the gears," said Mayor Larsen.

While Larsen gets the beef, he calls it a waste of town resources and taxpayer money.

From Larsen's perspective, it's a costly special election, especially since he and both town trustees are up for reelection next April.

"The proper thing to do is declare a candidate right now, start running against us," he said. "Let's have this conversation in the political sense so that general populous in Nederland has a choice to make come next April."

Larsen is a CU scientist by day turned mayor at night and admits there's been a learning curve.

"I probably haven't done as good of a job communicating as I could because I'm learning as I go," he said.

But running Nederland is not some cushy political job. Larsen gets a $250 monthly stipend. Trustees take home $150 a month and most, if not all, have full-time jobs.

"I wanted to get involved to keep Nederland, Nederland," said Larsen.

Other trustee worries about the unintended consequences

"I do this work because I care about the community. I'm raising my children here," said Trustee Julie Gustafson.

She shares many of Larsen's views, but worries more about the long-term impacts.

"When the community becomes so divisive that we can’t come together to try to move forward without solutions, it really has a rippling impact that can last for years," she said.

It’s a rippling impact she believes could prevent other people from volunteering to do the work in the future.

As for the short-term rental debacle, Gustafson points out the vote is not a done deal yet, but says there is a growing need to do something with these kinds of properties in town.

"There is a need to regulate short-term rentals to protect the ability for families to actually live in Nederland and make up the fabric of our community," she said.

Kicked out of office or not, she said she will not let the recall get in the way of the work.

"I can't let that influence how I'm going to set policy for the people of Nederland," said Gustafson.

Political expert calls it a sign of the times

"It's a relatively easy state to pull off a recall," said University of Denver political scientist and party system expert Seth Masket.

Masket said he hears from both sides on the recall efforts.

"I hear from Democrats saying, ‘This is an inappropriate use of the recall,’" he said. "And I've heard from Republicans saying, ‘Look, what other tools do we have?’”

Masket believes we are seeing more recalls across Colorado because of increasing polarization.

"Colorado is, by some measures, the most polarizing state legislature in the country," he explained. "The most-liberal Democrats, the most-conservative Republicans. For Republicans in state government right now, they see the state moving away from them."

The recalls are a political tool easy to deploy in Colorado that are now being used as a weapon against opposing agendas.

"Like many other tools, it can be abused and there are number of recalls in Colorado right now where the proponents will admit ... they just simply don't like them," said Masket.

Other residents don't agree with the recall

He doesn't believe most of the town is for the recalls.

"Most of the people who are not in support of this [make up] most of the town," he said.

Town recall guidelines state that the recall committee has 60 days to turn in the required number of signatures from registered voters, setting the deadline for Oct. 7 to make it on the ballot.

"The damage that will be done if they proceed … [includes] short-term rentals, infill development, the annexation— that's why we're doing it now."

Jarril said recall proponents have people ready to fill the mayor’s seat and two town trustee spots but are not announcing them until a recall is approved.