Facial recognition technology: does it violate privacy or protect community?

Editor's Note: Denver7 ‘360’ reporting explores different sides of topics that matter to Coloradans, bringing you multiple perspectives so you can make up your own mind. To comment on this or other 360 stories, email us at 360@TheDenverChannel.com. See more 360 stories here.

DENVER — It’s no secret technology is advancing faster than most of us can even believe. Driverless cars, walking & talking robots and even your phone can identify you and unlock itself. Facial recognition software, while not new, has been in the headlines as of late with regard to how it’s used, and whether it violates citizens’ privacy rights.

Take a look around downtown Denver, and you’ll notice cameras everywhere. Denver police use a HALO camera system to keep an eye on safety. Businesses use them for security. But what no one is talking about, is if any of these are used to identify people.

There’s much to be said for facial recognition technology. It’s used in theme parks to help find lost children. Jet Blue even tried it to help speed up the boarding process.

Years ago Facebook quietly began using the technology on every uploaded photo. It deactivated it in Europe after pushback, but now it's offering an updated version to European users, telling the New York Times:

“Face recognition technology allows us to help protect you from a stranger using your photo to impersonate you.” 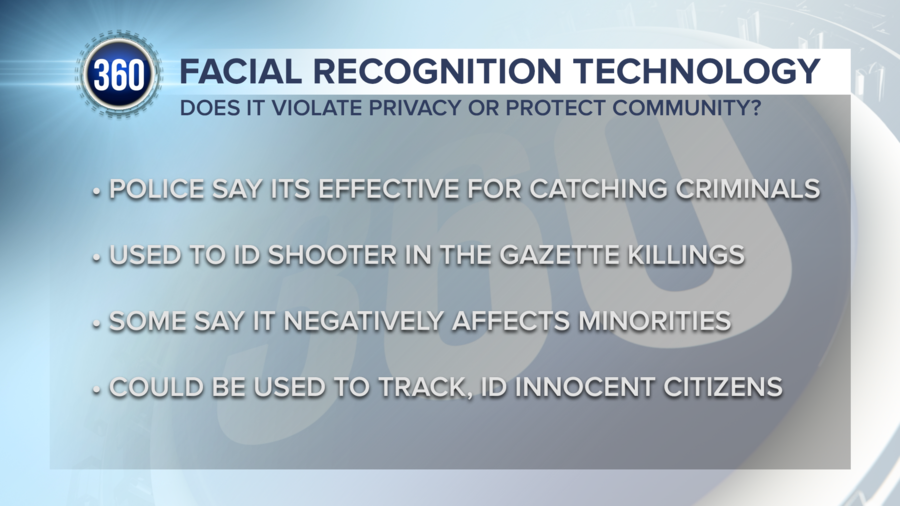 It was used to catch the Boston marathon bombers and most recently, a high profile use in identifying the alleged shooter in the Capital Gazette killings last month in Maryland. Local, state, and federal authorities see it as a benefit in solving crimes, and soon it will be used here in the Centennial state for that purpose.

Colorado Bureau of Investigations is planning to use software called Morpho Argus, a real-time video screening system that processes faces captured in live or recorded video.

That’s something the Electronic Frontier Foundation, a digital rights group, has been trying to fight for a while now. Lead attorney Jennifer Lynch has testified in front of Congress saying the technology and its flaws will negatively affect communities of color.

“Mugshot databases have a disproportionate number of African Americans, Latinos and immigrants. People of color will exponentially shoulder more of the burden of the [software's] inaccuracies than whites,” Lynch said.

It’s an issue in China too. The Chinese have already developed a vast surveillance network. Police there use glasses with facial recognition cameras attached. While they say it’s been an effective use for catching criminals, others warn it targets government protesters.

The ACLU agrees with those fears here in the US and has asked tech and commerce giant Amazon to stop selling software called Rekognition to police departments, fearing law enforcement could use the software to track and identify innocent citizens.

The heart of the conflict: how do you keep the community safe using technology that adds security without infringing on citizens’ privacy rights? Professor Jeff Smith from UC Denver sees this as unavoidable.

“It’s a delicate dance between technology and the comfort level of the public and policy,” said Smith. “As citizens are more comfortable with it in their lives and the performance of it gets better and better.”

Policy is part of the problem. It’s an example of technology outpacing the law. To date, there is no comprehensive legislation at the state or federal level to police the police when it comes to facial recognition software. Illinois and Texas have passed laws controlling its use by businesses.

Back to downtown Denver, where 16th Street is one of the most watched areas of the city. DPD uses cameras without facial recognition technology and a spokesperson told Denver7, the department is not considering it at this time. The signs make it clear they are actively monitoring in real time and recording anyone walking down the street.

“I’m sure those things are recording whether or not you’re jaywalking or biking on the pavement,” said Daniel Odetola. “I don’t quite feel anything at all, probably because I generally feel like a law-abiding citizen,” when asked his feelings about surveillance.

A few cities around the country have ordinances with some oversight on using the technology. But until laws are passed, it might be up to citizens pressuring companies like Amazon, police departments and local communities to set their own limits.

“Five years from now, we will be at a different place in terms of what facial recognition can accomplish,” said Smith.