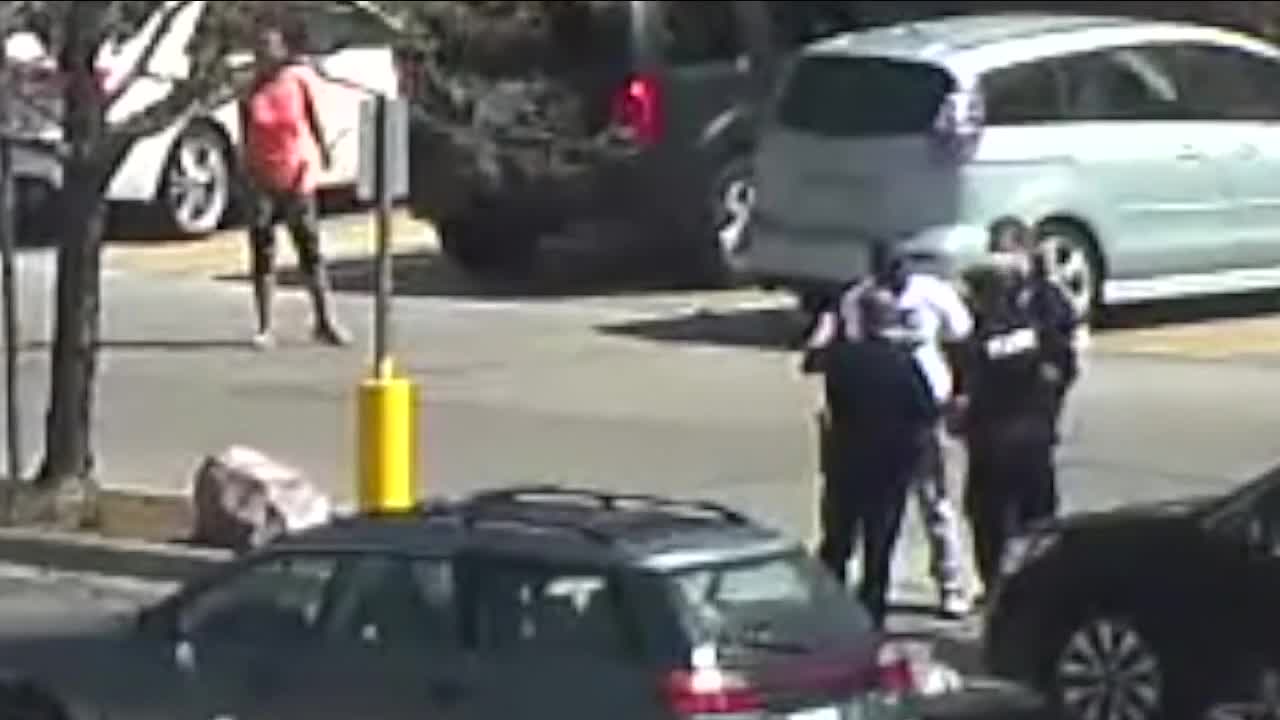 A father, his attorney and the NAACP will meet with the Denver Police Department after a sergeant pointed a gun with three children inside and detained him following a 911 call about a man with a gun. 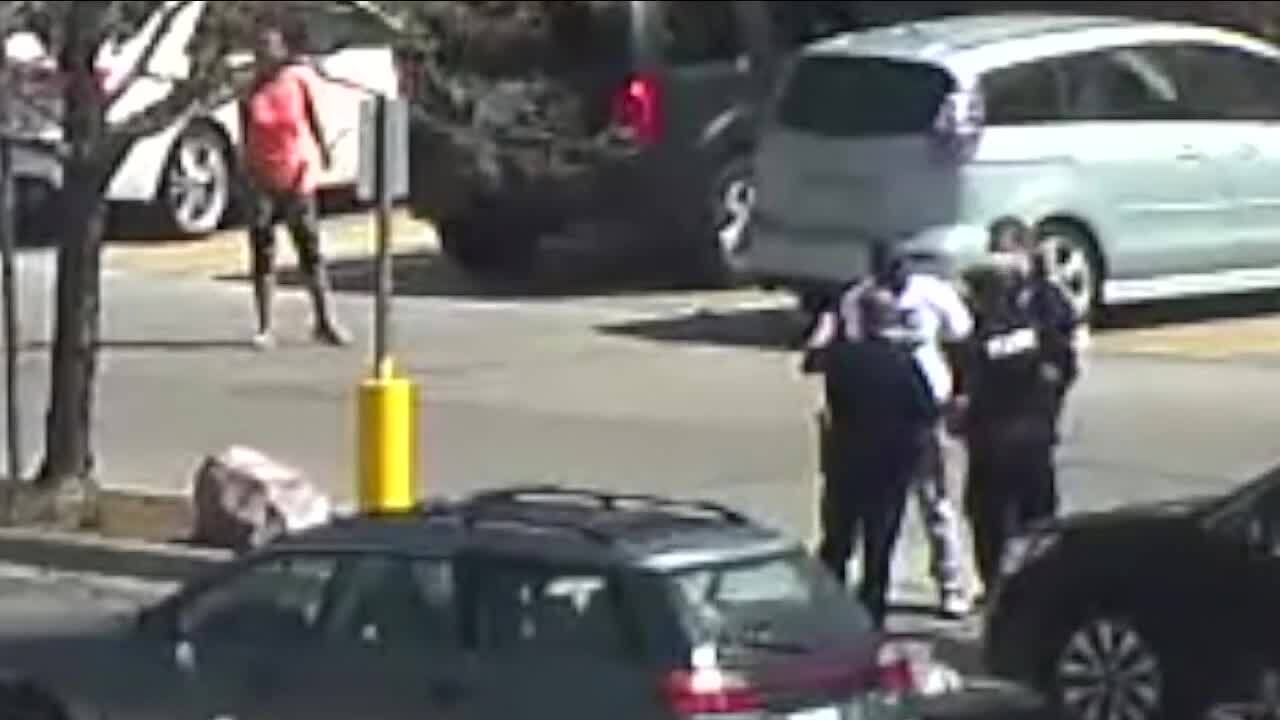 DENVER — A father, his attorney and the NAACP will meet with the Denver Police Department after a sergeant pointed a gun at the man's car, which had three children inside, and detained him following a 911 call about a man with a gun.

The incident happened in May at the Safeway on 14th Avenue and Krameria Street. Just a few days ago, Civil Rights Attorney David Lane released the 911 call and a video of his client being detained and an officer pointing a gun at a car with his stepchildren inside. The Denver Police Department also released body camera video.

Denver7 went 360 and gathered different perspectives to get a better understanding of what unfolded.

That day, an employee with the Safeway called 911 and informed the dispatcher that a customer witnessed a young black man with a gun inside a car in the parking lot, according to a 911 call released by Lane.

In a statement, Safeway says the customer who made the report to the employee was African American and was afraid for his safety and others.

Surveillance cameras were rolling as police responded to the Safeway parking lot. In the video, a Denver police sergeant is seen approaching the car described in the 911 call. He is then seen pointing his gun at the car.

"With his gun drawn, but held a low ready position, which is a tactical position where his finger is not on the trigger, but if the target were to present itself, they would be able to respond to that threat," said DPD Division Chief Ron Thomas.

Moments later, a toddler is spotted leaving the car and the sergeant retreats. The video captured before other officers arrived did not have audio, but the sergeant appears to be yelling commands. When a second officer arrives, they both approach the car from afar. Minutes later, Naphtahi Israel comes out of Safeway and three officers approach him. In the body camera video released by DPD, you can hear the officers tell Isreal they received a report of a black man with a gun that fit his description.

An officer handcuffs Isreal and they pat him down.

Afterward, in the video released by DPD, you hear an officer thank Isreal for his cooperation and explained what was going on.

Police didn't find a gun on Isreal, but Thomas said officers did not search the car.

Isreal said he bought snacks for his stepchildren — ages 14, 7, and 2 — and sent them to the car together while he finished grocery shopping.

"Fear. I was afraid for them, I was afraid for my life, but at the same time I felt helpless," Isreal told Denver7. "There was nothing in that call to say that a black male was trying to assault anyone, trying to rob anyone or hurt anyone. Caucasian people in Colorado drive around with their guns in their vehicle."

Thomas said it is DPD protocol to pat somebody down when dealing with a situation possibly involving weapons.

Denver7 asked Chief Thomas if he believes the situation was handled appropriately.

"I do, because while it's certainly legal to possess a weapon and have a weapon in your vehicle, I certainly think that there is a reason for concern," Thomas said. "There is a potential that this person could have been readying to rob the store or readying to assault someone in the parking lot."

Lane argues that Isreal and his stepchildren did not pose a threat.

"To pull a gun on a 14-year-old, 7-year-old and a 2-year-old girl while you are investigating, no crime having been committed, is ridiculously excessive," he said. "The 14-year-old...is in therapy."

Thomas said the sergeant approached the car from behind as a precaution, which makes it challenging to identify who is in the vehicle.

"He was not able to identify ages or the sex of the people that were in the car," Thomas said.

Isreal said the car doesn't have tinted windows and both doors of the car were visibly open.

He says his 14-year-old daughter was in the driver's seat holding his 2-year-old.

Edward Obayashi, an attorney and the deputy sheriff in Plumas County, California, is a national use-of-force expert who trains and advises California police agencies. He reviewed the video.

"It was a 15-second (span) of pointing his firearm at the potential threat but then immediately lowering his firearm when he saw the toddler," Obayashi said. "I think they handled it appropriately. They handled it with the circumstances that were present for them. I don't see any evidence of an over-aggression here."

Lane said he believes the situation could have been handled with more caution. He says officers should have pulled up near the car to get a better idea of who was inside and then approached the vehicle to discuss the 911 call. But Obayashi disagrees. He says Lane's approach would violate "any officer safety principal."

Obayashi pointed out that the sergeant could have waited for a second officer to arrive to get a better perspective of the situation at hand, but says without all the details of the information relayed to the officers by dispatch, he's not sure it would change the outcome. He also questions why the officers failed to search the car for a gun.

"We recognize how unfortunate it is that sometimes we act upon information that is false or incorrect, but I think officers did what they could to minimize the damage," Thompson said.

Isreal filed a complaint with the Denver Police Department. His claim is under investigation. A spokesperson with the police department says they are also investigating why the sergeant's body camera was not recording when he arrived and approached the vehicle.

Isreal says he did his best to keep his cool and follow the officer's orders.

"I felt like they did a good job in their encounter with me," Isreal said.

However, he says his stepchildren are traumatized.

"Can you tell me how many white people with concealed weapons permits go shopping at that Safeway every single day? And every one of them could pull that gun and rob the store or shoot it up or do whatever," Lane said.

DPD reached out to Isreal to discuss how police handled the situation. NAACP is arranging a meeting for June 18.