Shoppers would have to pay 10 cents per bag 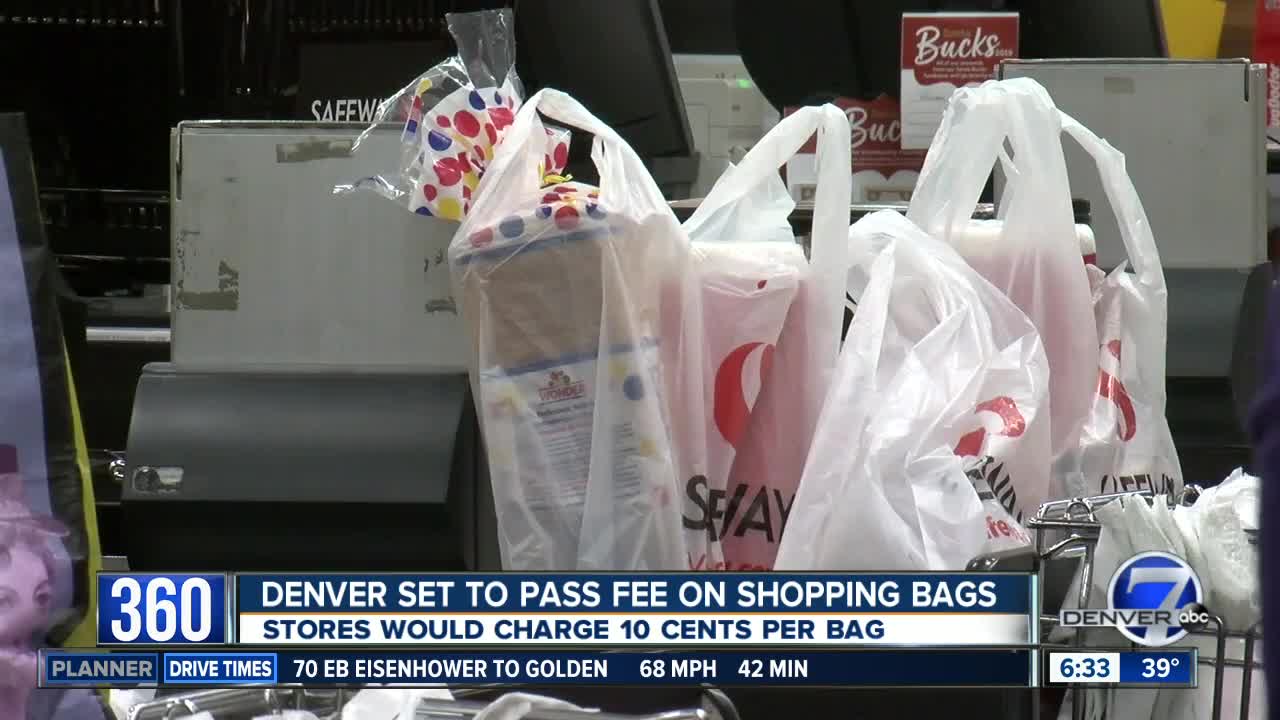 Tonight, the Denver City Council will take a second vote on a plan to start charging shoppers when they choose a disposable plastic or paper bag at the checkout counter.

On Monday night, the Denver City Council will take a second vote on a plan to start charging shoppers when they choose a disposable plastic or paper bag at the checkout counter.

The ordinance is expected to be signed into law by Mayor Michael Hancock if the second vote passes again. The first vote passed unanimously on Dec. 16.

Denver7 is going 360 to find out what people think of the fee, how it works in other cities, and if one kind of bag is better than another.

City Councilwoman Kendra Black, a co-sponsor of the bill, said the goal of this move is to reduce single-use plastic in the environment. While the fee is largely aimed at plastic, environmentalists say paper bags are also a problem, because of the energy and emissions required to manufacturer and transport them. Supporters of the ordinance believe a 10 cent fee on both types of bags will encourage people to bring their own reuseable shopping bags.

To see how the fee will work, we visited Boulder, which enacted a 10 cent fee on shopping bags in 2012. At one Safeway store, the majority of shoppers brought in their own bags.

Boulder Safeway stores said they’ve seen a decrease of about 70 percent of single use bags since the fee took effect.

Chris Howes, president of the Colorado Retail Council, said retailers support Denver’s plan to charge a fee. Like Boulder, the stores will get to keep 40 percent of the fee, while the city will take the other 60 percent.

Howes said stores will have to spend their portion to implement the program, train staff, and make changes to technology. But the hope is the majority of shoppers won't need to pay the fee because they will bring their own bags.

"What we ultimately want to do is encourage people to bring their own totes — reusable totes — into the store rather than using the single-use plastic bag," Howes said.

But are reuseable bags really so much better than plastic or paper bags?

One government study in the United Kingdom found shoppers would have to reuse a cotton bag 131 times to have less impact on the environment than a plastic bag used once.

The American Progressive Bag Alliance, which represents the interests of plastic shopping bag manufacturers, said plastic bags are not the enemy they've been made out to be.

He said plastic bags can also be recycled, but only if customers return them to the store. In Denver, plastic bags are not accepted in recycling bins.

"Plastic bags are really the bane of our industry," said John Griffith, regional vice president for GFL Environmental, which handles recycling for the city of Denver.

One problem is that plastic bags have to be very clean to have any recycling value, and unfortunately when they're mixed in with other recycling, they get dirty.

Another problem is that plastic bags get caught in the equipment at the recycling facility, sort of like a string in a vacuum cleaner.

"Every time we stop for breaks, we have to cut those things out, so it causes a lot of extra unwanted labor around here, and a lot of wear and tear on our equipment," Griffith said.

Whether or not the bag fee actually reduces the number of bags in the environment is largely up to the shoppers. They'll decide if 10 cents per bag is painful enough to encourage them to bring their own reuseable bags. The city of Denver said it will spend some of the fees it collects to distribute free bags to people. If passed, the bag fee will take effect in July of 2020.