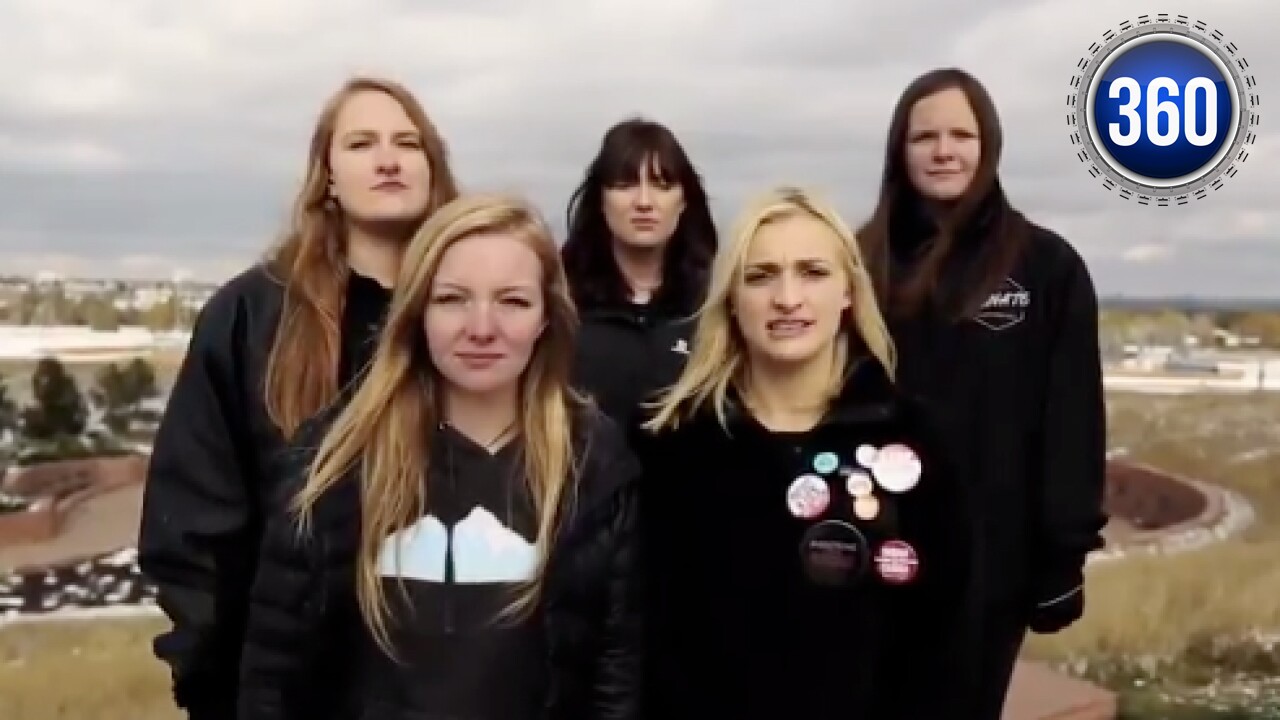 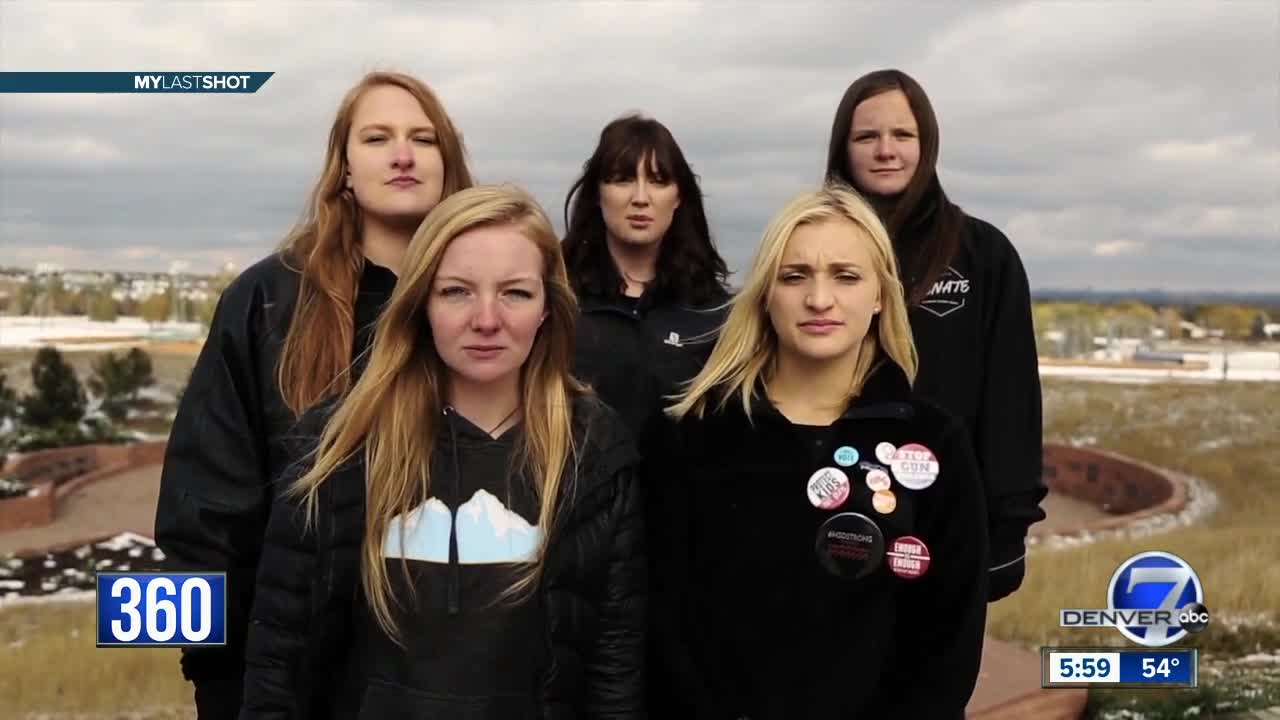 LITTLETON, Colo. -- A group of current Columbine High School students has started a campaign that they hope will change the perception of gun violence in the U.S.

The campaign is called "My Last Shot" and it encourages people to sign a petition and place a sticker on the back of their I.D. cards that reads, “In the event that I die from gun violence, please publicize the photo of my death.”

“A lot of times we're sheltered from the true realities of gun violence and what being shot really looks like,” Turner said. “I believe that seeing victims’ faces is really moving, but we don’t really process how people died. We see their face when they’re alive.”

Turner says it might take a more drastic move to get people to understand the true horrors of gun violence and create lasting, effective change.

It was the cell phone video taken inside of Marjory Stoneman Douglas High School during a shooting that left 17 students and staff members dead in Florida, that made her want to get involved in the movement.

“We don’t want to traumatize people more but it’s like, if nothing is going to be done then we need to at least attempt to show people what is actually occurring because we can’t just keep sitting around,” Turner said.

They have seen how images have affected history from the Vietnam War to the civil rights movement.

Turner says if it comes to it, she hopes an image of her death, no matter how graphic, would be a turning point for the country.

“I don’t want to see these images myself, but I also don’t want to go to my life fearing that I’m going to be shot anywhere I go,” she said.

“In the end, my parents were like, ‘If that’s what you want to do with your body then it’s your choice,’ so they support me and they will be my advocates if I ever am to die like that,” she said.

Rep. Tom Sullivan knows firsthand the power of a picture. Sullivan, a Democrat who represents Centennial, lost his son Alex in the Aurora theater shooting in 2012 and has been campaigning for change ever since.

On his desk in Sullivan’s office across from the state capitol rests a picture of Alex when he was a child wearing a blue jacket with his arm around his sister, smiling at the camera. It’s a moment Sullivan likes to remember Alex by.

However, Sullivan will never forget the last images of his son, laying on the floor of a movie theater after being shot. While Sullivan feels the loss and grief every day, he knows others can forget the true horrors of that shooting.

“The impact of our story, once you hear it over and over again, is that it wasn’t fazing anybody,” Sullivan said. “Maybe they need to see some of these pictures.”

So, Sullivan has worked for years to get a hold of the pictures from inside of the theater of his son’s body and the carnage the shooter left behind to show to others.

“I have been down to the District Attorney’s Office and asked for Alex‘s crime scene photo. He is lying on the floor in row 12. He was wearing khaki pants and a red shirt. He’s lying face down. The other photo that I’m asking for is his autopsy picture,” he said.

Sullivan carries the crime scene photos around on his phone to show to people who want to better understand the realities of gun violence.

For Sullivan, the choice was easier than some. He says Alex was only shot once and died instantly, but he has seen other, much more graphic photos of people who were shot multiple times and says the decision to share these photos is one for the families to make.

Sullivan believe change is happening. He points to his election as proof of that. He also understands why the students are making this push.

“It’s sad that they are even thinking about something like that, it just disappoints me to no end,” he said. “This is the generation that knows nothing else but active shooter drills in school.”

In the end, Sullivan says he is using his son’s story and the images of his death to draw on people’s emotions, hoping that no one else will have to experience his pain to push for change.

While some believe the graphic images could be beneficial, a research team at UC Irvine says they can be traumatizing.

Alison Holman is an associate professor in nursing at the school. Holman and her peers conducted a long-term study on the effects of graphic images on people in the aftermath of the Boston Marathon bombing.

The group surveyed almost 4,700 people over a number of years about the graphic images they saw that day and after other tragedies.

“The impact of graphic images is more than we might imagine. The problem is that people engage with the media extensively,” Holman said.

In the immediate aftermath of the Boston bombing, Holman said people she surveyed who saw the images but were not at the marathon reported levels of acute stress more than the people who were at the site of the bombing.

“We find that people who report high levels of exposure to this graphic imagery can experience greater symptomatology, mental health symptoms and post-traumatic stress symptoms,” she said.

Holman says she understands the students’ desire to want to invoke change using images. However, she believes showing the images would be more damaging than helpful.

“I don’t think that showing that to the public is necessarily going to make the public more open to instituting the kind of changes they would want,” Holman said.

She doesn’t believe traumatizing people is the right way to get them to listen.

Beyond that, Holman worries about the negative consequences these images could have to inspire others to act similarly.

“Seeing really graphic and gruesome images of real-life events is precisely why people who are trying to terrorize populations use the media to express themselves,” she said.

Holman pointed to ISIS beheading videos and the recent shooting at two New Zealand mosques as examples of these fear tactics.

“He wanted the world to see what he was doing, to glorify it,” Holman said of the New Zealand massacre. “We don’t want to do terrorists' jobs for them.”

Holman believes it’s a matter of the media using images responsibly to convey a story without traumatizing viewers.

The stickers some teenagers are choosing to put on the back of their license are one way to gain attention to their cause, but showing images of victims’ bodies is another matter.

For Lynn Walsh, the ethics chair of the Society of Professional Journalists, there are legal and ethical concerns to think about.

First, Walsh says crime scene photos are almost never given out right after a tragedy and may never be released to the public or the media.

Even if the media got a hold of the images, many of the students putting the stickers on the back of their I.D. cards asking to have their images shown are underage. SPJ says it supports the rule that most newsrooms have requiring parental permission to speak with underage students or use their images.

Walsh said showing those images without the explicit consent of the parents could present legal and ethical conflicts.

Beyond that, according to SPJ’s code of ethics, it is the duty of journalists to minimize the harm that a story can cause.

The bottom line for Walsh is that she does not believe showing these graphic images would add to the story.

“It causes more harm when it’s not necessary,” she said.

Walsh says it’s the job of journalists to share information about tragedies with the public without causing more pain.

This April will mark the 20th anniversary of the Columbine shooting. The students currently walking through the halls of the high school were not alive when one teacher and 12 students were murdered in those very halls.

However, Columbine’s current student population is used to active shooter drills in their school and they walk or drive past the memorial to the 13 who died each day on their way to lunch or home from school. They also spend every April 20th performing service projects as a way to honor the day.

The effects of gun violence are widespread and can last for years or even decades.

While many disagree with how gun violence should be addressed and possible solutions, no one wants to have to build another memorial to honor victims of a senseless tragedy.