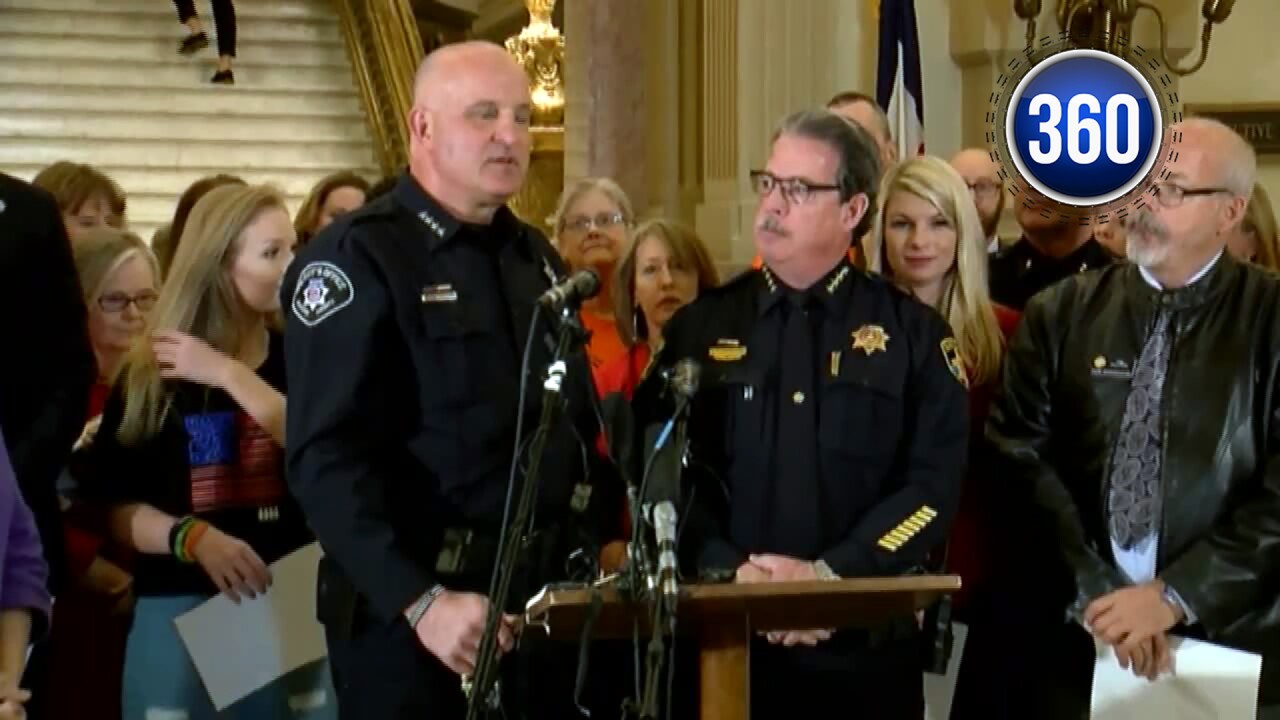 Copyright 2019 Scripps Media, Inc. All rights reserved. This material may not be published, broadcast, rewritten, or redistributed.
Colorado lawmakers unveiled a “red flag” bill Thursday alongside the sheriffs from Boulder and Douglas counties that aims to allow judges to take weapons away from people deemed an “extreme risk” – the second year in a row that such a bill has been introduced at the General Assembly. 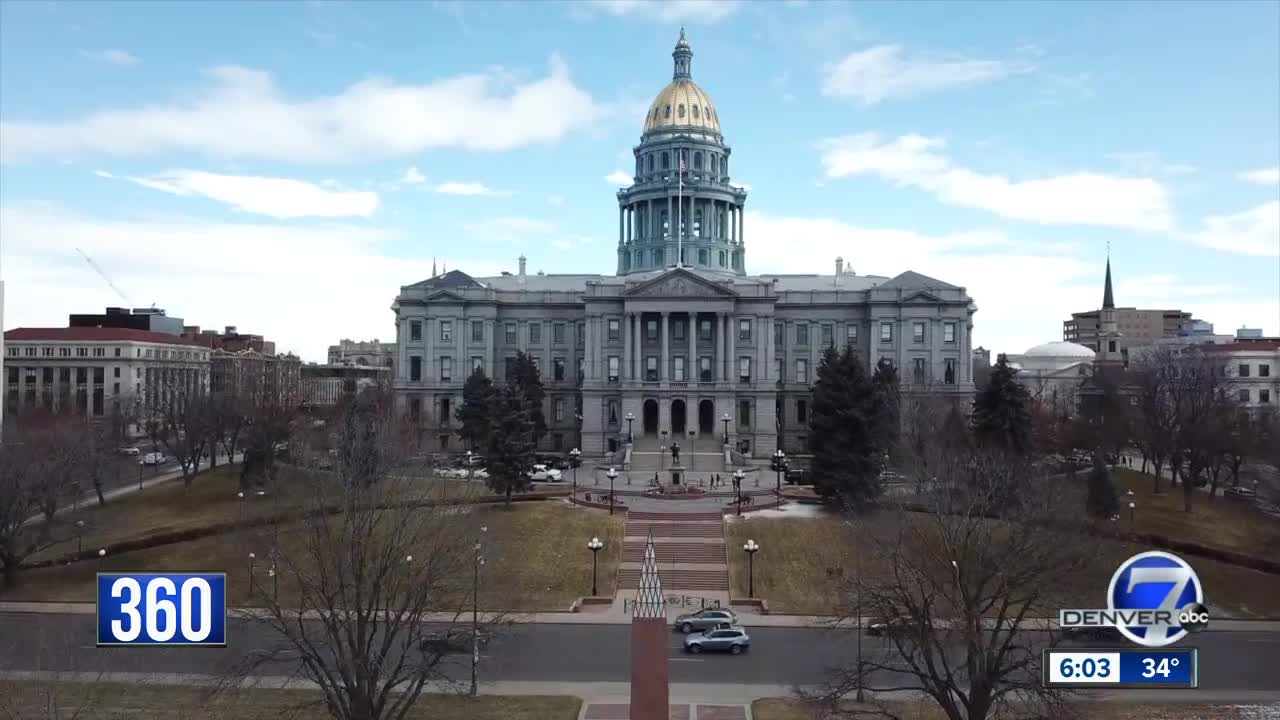 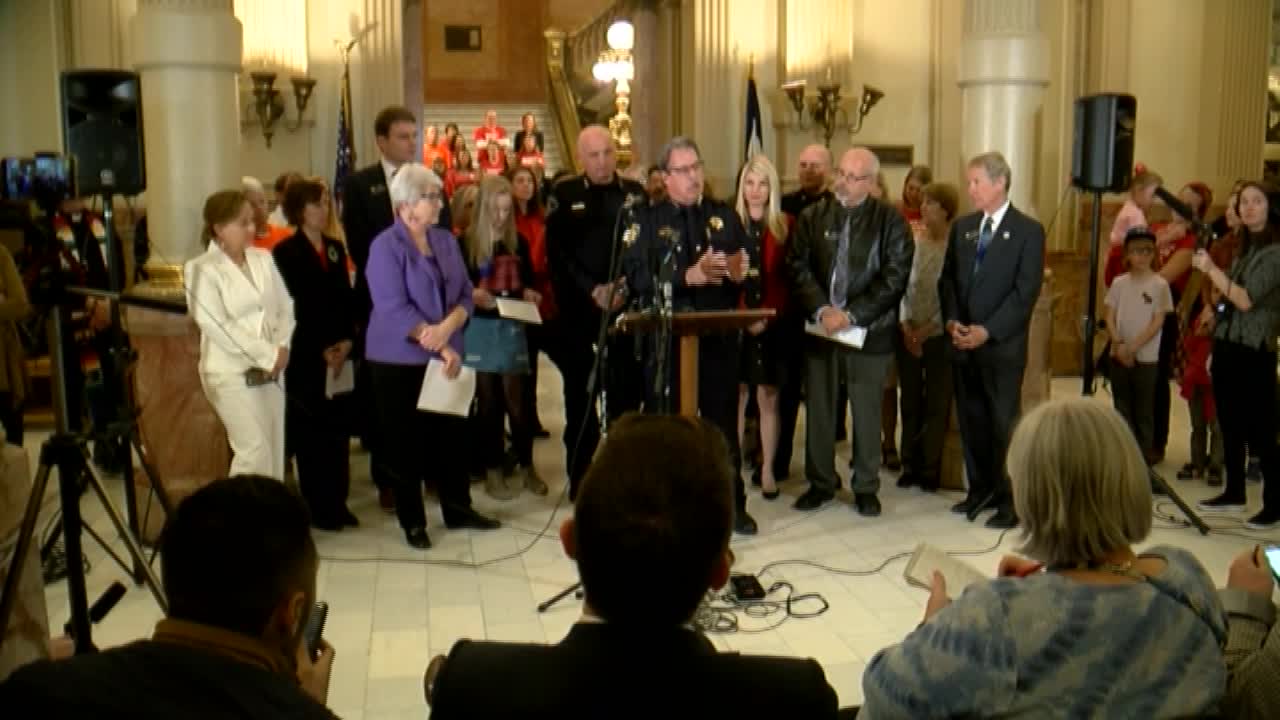 DENVER – Colorado lawmakers unveiled a “red flag” bill Thursday that aims to allow judges to take weapons away from people deemed an “extreme risk” – the second year in a row that such a bill has been introduced at the General Assembly.

The bill, called the “Deputy Zackari Parrish III Violence Protection Act” was announced at a 1:30 p.m. press conference at the state Capitol. Sponsors and proponents of the bill – which include Democratic lawmakers, the Douglas and Boulder County sheriffs and gun violence prevention advocates – attended the unveiling.

The measure was unveiled on the anniversary of the mass shooting in Parkland, Fla.

House Majority Leader Alec Garnett, D-Denver, will again cosponsor the measure – something he hinted at shortly after the November election. Last year’s red flag bill passed the Democratic-held House in a 37-23 vote but was killed by Republicans on the Senate State, Military and Veterans Affairs Committee in a 3-2 vote.

The measure is again named after Douglas County Sheriff’s Deputy Zackari Parrish, who was killed on New Year’s Eve 2017 by a man who the department knew had a history of mental health issues and several weapons.

Among the measure’s supporters, both this year and last, is Douglas County Sheriff Tony Spurlock, who attended Thursday’s announcement and who told Denver7 in November: “I do hope we can work together to pass a bill that will help save lives and support mental health in the great state of Colorado.”

Changes in 2019 bill from last year

The bill would allow family members and law enforcement to petition to a court to have a person evaluated to see if they are an “extreme risk.” If a judge finds that person does indeed pose such a risk to themselves or others, they could grant the protection order which would allow for that person’s weapons to be confiscated for a period of time.

This year’s measure carries differences from last year’s bill, however, which stemmed from discussions with courts and law enforcement, Garnett said.

The 2019 measure doubles the amount of time that a judge would have to consider appeals from seven to 14 days, and from 182 days to 364 days for the full extreme risk protection order.

The burden of proof for a person deemed an extreme risk would shift to them when trying to get a judge to terminate the order, though the initial burden of proof to get an order granted lies with the person petitioning. A judge has the discretion to allow respondents multiple chances to get the order lifted, and respondents would also be provided legal counsel at the expense of the state -- another change from last year's bill.

Democrats, some law enforcement say bill has had significant input

“This is so important for the people of Colorado,” Spurlock said. “This bill is about people who have an extreme risk that their behavior, their mental health, is in such a degree that they no longer have control over it … this is about saving lives.”

He said the measure would help get those who need treatment help and to temporarily remove the guns to “minimize” risks to those people themselves and other around them.

“I’m very thankful the legislators have taken this … and I’m so thankful that [Garnett has] stood up again and brought some more folks with him, some more legislators, who feel the same way as him,” Spurlock said.

Changes in the legislature could give this year’s measure a better chance of passing than last year’s bill. Democrats now control the state Senate with a 19-16 majority.

But former House Assistant Minority Leader Cole Wist, R-Centennial, who was one of the Republican cosponsors of the measure last year, is gone from the General Assembly – defeated in November by Tom Sullivan, a Centennial Democrat and the father of a victim of the Aurora theater shooting who campaigned largely on a gun violence prevention stance and will cosponsor this year’s measure.

"I'm here at the legislature to make sure what happened to my family and my son doesn't happen to others," Sullivan said. "This extreme risk protection order is about saving lives. ... This is something [law enforcement is] asking for and we shouldn't get in their way."

"I'm not doing this for Alex and my family, I'm doing this for yours," Sullivan added. "Watching your child's body drop into the ground is as bad as it gets, and I'm going to do everything I can to make sure that none of you have to do that. ... I'm working every day to do this."

Senate President Leroy Garcia, D-Pueblo, said he welcomed the bill and ongoing discussions. His Senate District was one of the seats recalled after 2013 gun violence prevention measures were passed, but he won the seat back for Democrats in 2014.

"I recognize this conversation is difficult, but it is one we need to have and an issue we need to address. We must protect the most vulnerable while respecting law-abiding citizens. I look forward to continued conversation with Majority Leader Garnett and Coloradans to ensure that we find the best policy for Colorado."

Some Republicans opposed, including 2018 cosponsor

Wist said Thursday ahead of the bill’s unveiling that he does not support this year’s measure.

“There are significant material differences in this year’s bill. Notable are the longer time periods and the ill-advised shifting of the burden of proof onto the person seeking to restore their rights. I am opposed and urge the General Assembly to vote no,” Wist said in a tweet.

Current legislative Republicans, most who opposed last year’s measure as well, said ahead of Thursday’s announcement they had similar issues with this year’s measure.

“I didn’t think that last year’s bill could get any worse, but apparently they’ve made it even worse,” said House Minority Leader Patrick Neville, R-Castle Rock. “This bill, as written now, actually requires you to prove your innocence. So first off, there’s no due process and there’s no first, initial stages because you don’t even get a chance to defend yourself. And then, after that actually occurs, then the burden of proof is actually on you to prove your innocence, and it’s just not the American way.”

Due process concerns for the person having their weapons taken, which Republicans cited last year in killing the measure, have already roiled Republicans regarding this year’s measure.

“This is going to increase the stigma for those actually seeking mental health treatment because they’re going to be afraid that if they actually go and seek the help, that something like this might actually be put on them without their knowledge,” Neville added. “It just exasperates the problem. So beyond the due process, I think it’s actually hurting the problem.”

Neville said the measure was “bad policy” and hinted that he believed Democrats could see consequences for passing the measure like some did when they were recalled in 2013 after passing gun violence prevention measures.

“As we’ve seen in the past, there are consequences to their overreach,” Neville told Denver7 Thursday morning.

“There was an overreach a couple years ago, and I have a feeling it’s going to be an overreach on this bill,” said Sen. John Cooke, R-Greeley, echoing Neville’s sentiments.

“[The Democrats] should be concerned about it too, because if we look back at the overreach they did a few years ago … there were two senators that were recalled and one resigned before she could be recalled. So they should be concerned about it as well because this is – we’re talking about a person’s Second Amendment right, a constitutional right.”

Cooke, however, admitted that there was “nothing that would make me support” the bill.

“If they concentrate more on the mental health side versus the firearm confiscation, then I might be able to support something,” he conceded.

Rocky Mountain Gun Owners, a group that vehemently opposes any so-called gun-control legislation in Colorado, said the measure was “dangerous” and “designed to strip gun owners of their lawfully owned property.”

“It’s unfortunate House Democrats picked the anniversary of a major school shooting to push a bill weaponizing police against law-abiding citizens instead of the criminals who perpetrate these attacks,” Executive Director Dudley Brown said. “The bill will do nothing to prevent another Columbine, Aurora, or Parkland.”

Spurlock pushed back against the opposition from Brown and other Republicans, however.

"The men and women of the Douglas County Sheriff's Office and men and women in law enforcement around teh state are on the ground and they know best," he said.

And Coloradans themselves – even conservatives – might be ready for such a measure to become law, according to polling. A poll released Thursday by Magellan Strategies of 622 Republican primary and general election voters from Colorado showed 60 percent of respondents said they would support a measure such as last year’s red flag bill.

“During the state legislative session last year, a bill was introduced called the ‘Red Flag’ law. The Red Flag law allows a judge to take guns temporarily from someone who is determined to be a significant risk to themselves or others, based on evidence presented to the judge. Knowing this information, do you support or oppose the Red Flag law?” the poll question asked.

“That seems like the bipartisan support that everyone should be looking at,” Garnett said of the poll released Thursday.

Sullivan and Garnett are the House cosponsors of the measure and Sen. Lois Court, D-Denver and Brittany Pettersen, D-Lakewood, are the Senate sponsors.

"It is not controversial with our constituents and with Coloradans," Pettersen said at Thursday's news conference, urging Republicans to act on the measure. "This is about safety. This is about saving lives in Colorado."

"If we keep talking about it, people are going to keep dying. And this is a simple thing to do to save lives," Sullivan said. "I'm ready to do it. I hope I can count on each and everyone of you ... to get this taken care of and make Colorado the next state that passes and extreme risk protection order.

"I am a complete advocate of guns. I am a suporter of the Second Amendment. I understand [oppenents'] positions but I have spoken to many people until I am blue in the face. ... They're going to get their weapons back," Spurlock added. "If we were going to take your guns away and never ever get them, then I say I can't stand for that. But that's not what this bill says."