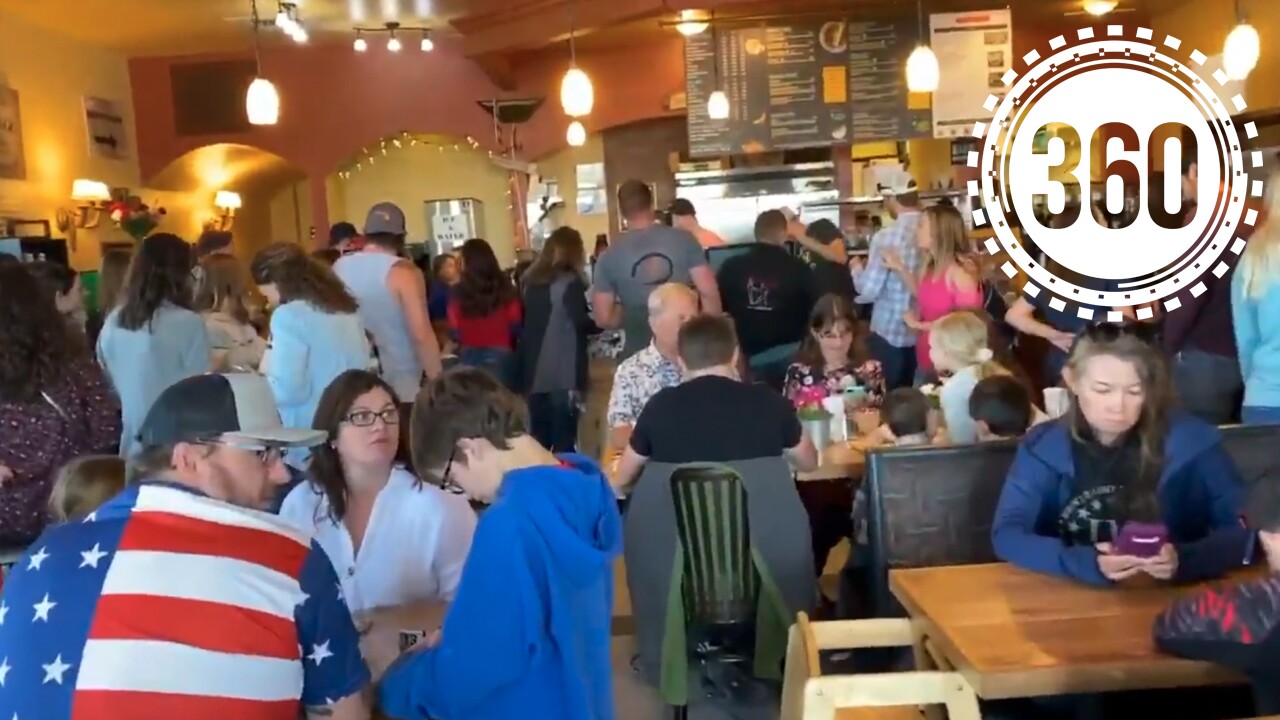 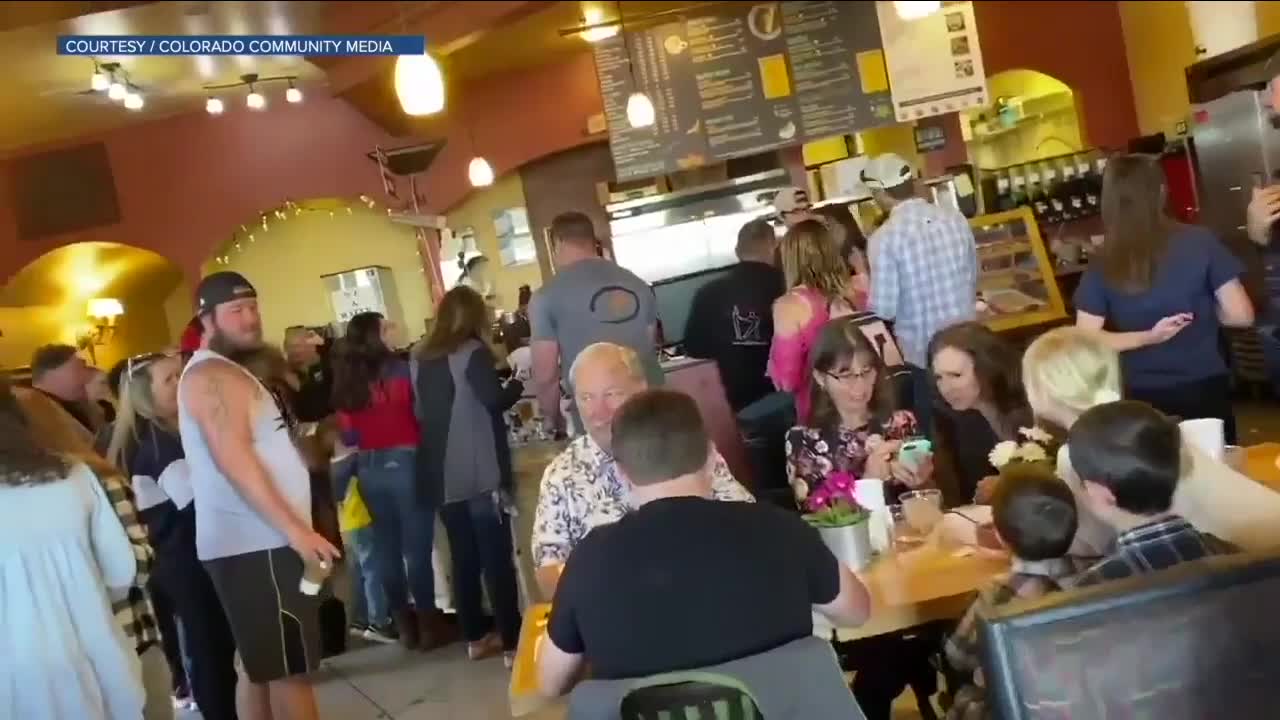 DENVER -- While some businesses open their doors, restaurants are left waiting for the day they can let customers dine inside to help boost profits. In Castle Rock, a business owner defied the governor's safer-at-home order and illegally opened its doors on Mother's Day. Hundreds of customers flocked to the restaurant.

A video of the packed cafe went viral and with the support, came the backlash. Only one person can be spotted in the video at C&C - Breakfast & Korean Kitchen wearing a mask, and it appeared social distancing was not on the menu. The owner, Jesse Arellano, estimates about 500 customers came out to support his business on Sunday.

Denver7 went 360 to bring you multiple perspectives as people weigh in on whether the restaurant should stay open or close.

During his daily news conference on the state's response to COVID-19, Governor Jared Polis on Monday said he was “extremely disappointed” when he saw the videos taken inside the Castle Rock restaurant and said the Colorado Department of Public Health and Environment (CDPHE) was using its authority under the Colorado Food Protection Act to suspend the café’s license indefinitely – which Polis said would probably be at least 30 days.

"The Colorado Department of Public Health and Environment believes that the C&C Coffee and Korean Kitchen in Castle Rock is causing an immediate health hazard," he said. "It's very sad when businesses operate illegally and workers lose their jobs through no fault of their own. Some businesses that operate illegally might face costly court battle or even worse — the deaths of employees, owners or patrons."

He said the owner of the restaurant was being irresponsible by opening in defiance of the public health order because being shut down for at least 30 days will mean likely lost wages for the employees and money not coming in that could have been used to pay rent or the mortgage for the building.

Arellano, the owner of the café, says he doesn't regret his actions, and added it's not fair that big stores like Costco and Walmart can operate, but small business owners can't open their doors. He said his family's livelihood is on the line if he continues to keep his doors closed.

"Done. Bankrupt. Personally, business, everything. It's done. At this point, what does it matter?" he said. "I believe in freedom and that's what we are here for. We are standing for freedom."

He said he did mark off tables with tape, but adds that he was busy and it wasn’t his place to tell customers what to do.

Signs on the doors read, "IF YOU ARE SCARED STAY AT HOME!"

"We are not stupid," Arellano said. We are not children and I think that is what we are being treated like."

His actions to open have garnered both support and backlash.

"Lots of hate, they want to burn the place down, they want to threaten our lives and hope we all die of COVID(-19)," Arellano said.

He said he's not too worried about lawsuits because it's going to be difficult to pinpoint if an outbreak started at his business.

Julie and Allan Harris chatted outside with April Arellano, one of the owners of the café. They say there were there to show their support.

"I thought it was great and I think it's a personal choice. She owns a business, she should be able to run it," Julie Harris said. "They just want to work."

Allan Harris said a spike in cases is bound to happen but too much is unknown to keep businesses closed.

"They have to make that call themselves and if it ends up backfiring on them and they do have an outbreak that is centered here with their employees, with customers, they will have to deal with it," he said.

A Denver7 viewer who did not want to be named emailed his support. His email read in part, "I hope that other owners take note and start doing what is right for THEIR business to stay afloat. People have had enough. They no longer are willing to commit financial suicide."

Laura Dufresne, a teacher's assistant at Maryhill School, just a few doors down from the café, called the owners' actions reckless.

"To have people in such closer quarters and have them in such a dangerous situation — it's irresponsible, it's small-minded, it's short-sighted," DuFresne said. "I would never ever put my staff, my customers, the people who I owe my success to, in that kind of danger."

She said the children she helps care for wear masks and they make sure they take the necessary precautions to keep everyone safe.

"It's not patriotic," she said. "We are all in this together. We are all struggling and it's not an excuse. We cannot use this pandemic as an excuse to be irresponsible and to open your doors."

Amy Buckingham, the owner of Rock Paper Scissors Hair Studio near the café, said she was infuriated by her neighbors' actions.

"It simply highlights maybe an ignorance and it also highlights some selfishness," Buckingham said. "It's an act of kindness in solidarity to wear a mask in public. It's your civic duty right now."

What’s next for the café

The Tri-County Health Department ordered the restaurant to close immediately on Monday. It's a risk the owners will have to weigh.

April Arellano disclosed to customers they planned to reopen on Tuesday, but when Denver7 asked her husband, he said he wasn't sure.

Denver7 reached out to the Tri-County Health Department and the state to find out what happens next if the owners decide to reopen, but we have not heard back.