BROOMFIELD, Colo. -- Most people learn about pronouns in elementary school and how to replace a noun with a “he,” “she”, or “they.” Now the City and County of Broomfield is taking a closer look at pronouns within its city charter.

As it’s written right now, Broomfield’s City Charter contains multiple pronouns, many of them referring to the male gender. There are multiple references to “he,” “his,” and “him,” within sections defining the role and powers of the Mayor, City Council, and other administrators.

For example, in Section 4.4 under Mayor’s powers and duties, the City Charter reads in part:

“The Mayor shall be recognized as the head of the City government for all ceremonial, dignitary and legal purposes, and he shall execute and authenticate legal instruments requiring his signing as such official.”

There are similar statements in several sections of the charter.

Pushing for a change

She’s the one behind the push to replace those male pronouns with gender neutral ones.

“Pronouns are personal. They identify who you are and using the correct one shows respect to the people you are referring to,” she said.

The language is still being worked out by city staff, but would likely be a find-and-replace of “he,” “his,” and “him” with “they,” “theirs,” and “them.”

For those concerned about “they” as a singular term, the Merriam Webster’s dictionary published this piece on the pronoun and the way it is now being used when talking about gender.

“The exclusive use of "he" and "his" misgenders half of our council,” Castriotta said. “There are five women on council. We even had a female mayor, so I find it hard to believe it took until now to get this changed.”

Any change to the city charter, including for pronouns, would require a vote of the people through a ballot measure. This one could make this November’s ballot.

The document, which acts as a rule-book for government, was passed in 1974 by a committee comprised of all men.

Broomfield isn’t the only government to have a few mentions of male pronouns in their main documents.

According to the U.S. Constitution, Article Two, Section Four referring to the President: “He shall hold his Office during the Term of four Years…”

But while the councilwoman behind the idea says she has the support in City Council and believes she does in the voting public, there are some who believe the focus should be on another pressing issue.

“Oil and gas is the number one thing affecting our city,” resident Heidi Henkel said.

A concerned group of residents packed a special meeting of Broomfield City Council on Tuesday to discuss new drilling sites.

Many recognized the need to bring city documents up to date in terms of gender, but also favored responsible action on oil and gas.

“Even if we have certain changes in pronouns we still have to have health and safety to be a 'he' or 'she.' And so that’s why its super important to heighten this as the top of our agenda here in Broomfield,” Henkel responded.

This topic received quite the response on the Denver7 Facebook page. Many commenters brought the “gender neutral” question back to the issue of gender neutral bathrooms. Others had mixed takes on updating Broomfield’s charter.

Rebecca called it “a complete waste of time, energy, money, and resources.”

Rose said, “How about we focus on things that (expletive) matter?”

But Meghan said this would “include a marginalized population and harm literally nobody.”

Still others referred to the transgender and gender-fluid populations and how changing pronouns could be a good thing for those who don’t identify with traditional gender pronouns. 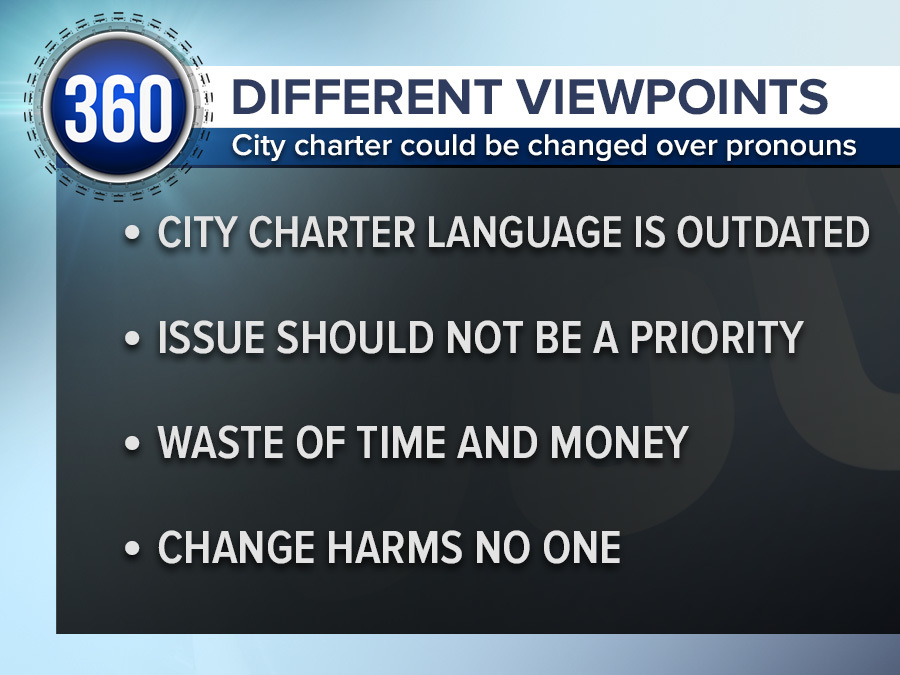 The issue of pronouns will be up for debate at the next regularly scheduled city council meeting on August 14. If it passes that vote and a secondary vote at the end of the month, it will be on the November ballot. Then it’s up to the Broomfield voting population, and a simple majority would mean the find-and-replace of pronouns would happen.