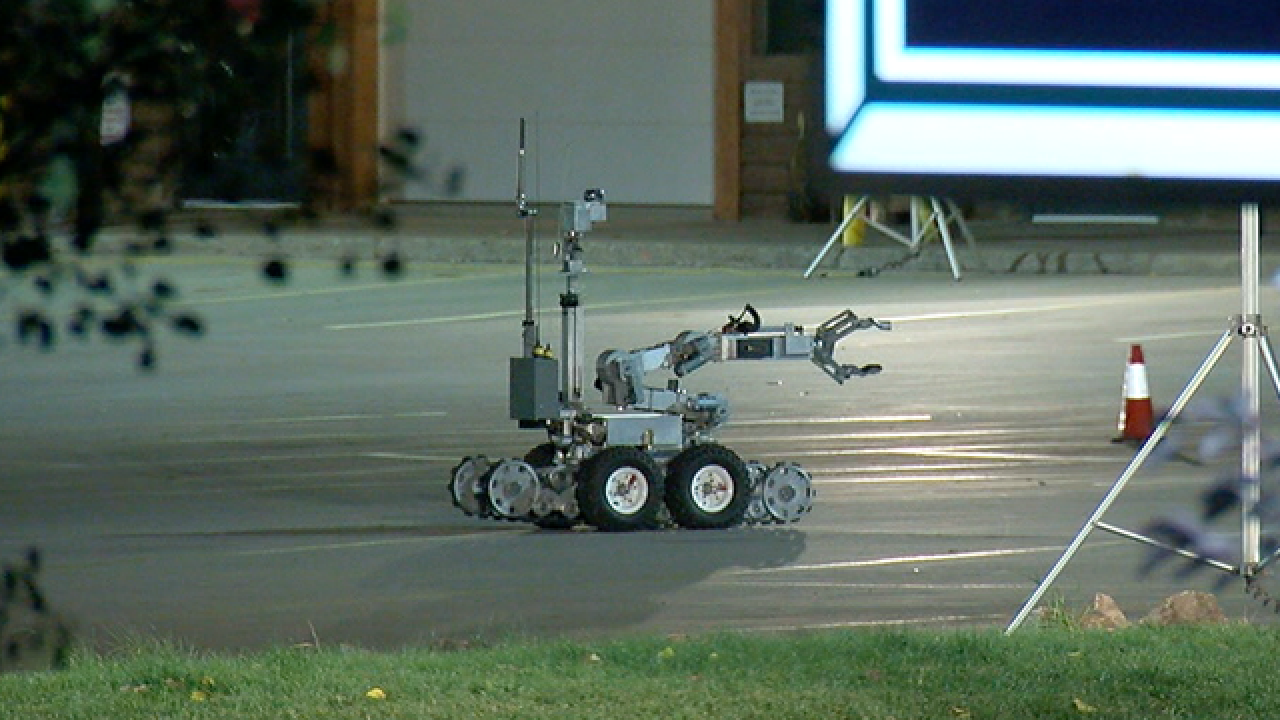 NEDERLAND, Colo. -- A California man was arrested in Chicago over the weekend in connection to the bomb left at a Nederland shopping center that also houses the town's police headquarters.

A criminal complaint filed in U.S. District Court of Colorado on Saturday charges David Michael Ansberry, 64, with manufacturing the explosive device, which was found outside the Nederland police station last week.

The complaint was filed Oct. 15 and unsealed Monday.

Ansberry is charged with destruction or attempted destruction of a building or property by means of fire or explosive under federal law.

Ansberry allegedly dropped off the bomb in a backpack in the early-morning hours last Tuesday.

Believing it was lost property dropped off at the station, the officer first officer to arrive to the station that morning brought the bag inside, then began to look inside. What he found led him to evacuate that office, then the entire Caribou Ridge Shopping Center.

After placing the cell phone attached to the device inside a signal-proof box, the explosive was detonated by bomb squad agents. No one was hurt.

Authorities were able to trace the phones back to stores in Denver and Longmont, and through surveillance video were able to identify the person who bought them as a man who is 3-foot-6 inches tall and weighed about 100 pounds.

The man also had a pony tail, was wearing a baseball hat at the time and was on crutches.

After discovering the surveillance footage, Nederland police told authorities they had seen a man fitting the same description evacuating the nearby Boulder Creek Lodge the morning of the bomb scare.

Detectives checked with the hotel, which provided a senior citizens ID card identifying Ansberry as the man who had rented a room.

Authorities cross-checked a California phone number Ansberry had provided the hotel, and found another California number associated with Ansberry.

The second number was used to call a taxi company from the same hotel. Police were able to trace one of the two California numbers to the only Verizon cell tower in Nederland, placing Ansberry at the scene when the bomb was active.

It is unclear under what circumstances Ansberry was arrested in Chicago.

A relative, who said they were surprised to hear of the news, confirmed to Denver7 Ansberry had lived in the Berkeley, California area for some time up to a year ago, when he left to save money.

The relative told Denver7 that Ansberry had planned to travel through the Rockies, but said they were unclear on the rest of his plans.

Patent records show David. M. Ansberry has a patent called “Assessment of solar energy potential on existing buildings in a region” registered as of December 2007.

Ansberry faces a minimum of 5 years and up to 20 years in federal prison if convicted on the charges. He also faces a fine of up to $250,000.

He made his first federal appearance in Chicago Sunday and will be extradited back to Colorado to face the charges.

“Thanks to the tireless work of this team of law enforcement professionals, a man who is charged with placing a dangerous device in a public place is in custody,” said Acting U.S. Attorney Bob Troyer.  “The FBI, Boulder County Sheriff’s Office, the Nederland Police Department, and the ATF pulled together, dismantled this explosive device, and tracked down the man who allegedly made and placed it.  Outstanding work all around.”

A joint investigation by the FBI, ATF, the Boulder County Sheriff’s Office and the Nederland Police Department remains ongoing. Anyone with information on the attempted bombing is asked to call 303-629-7171.