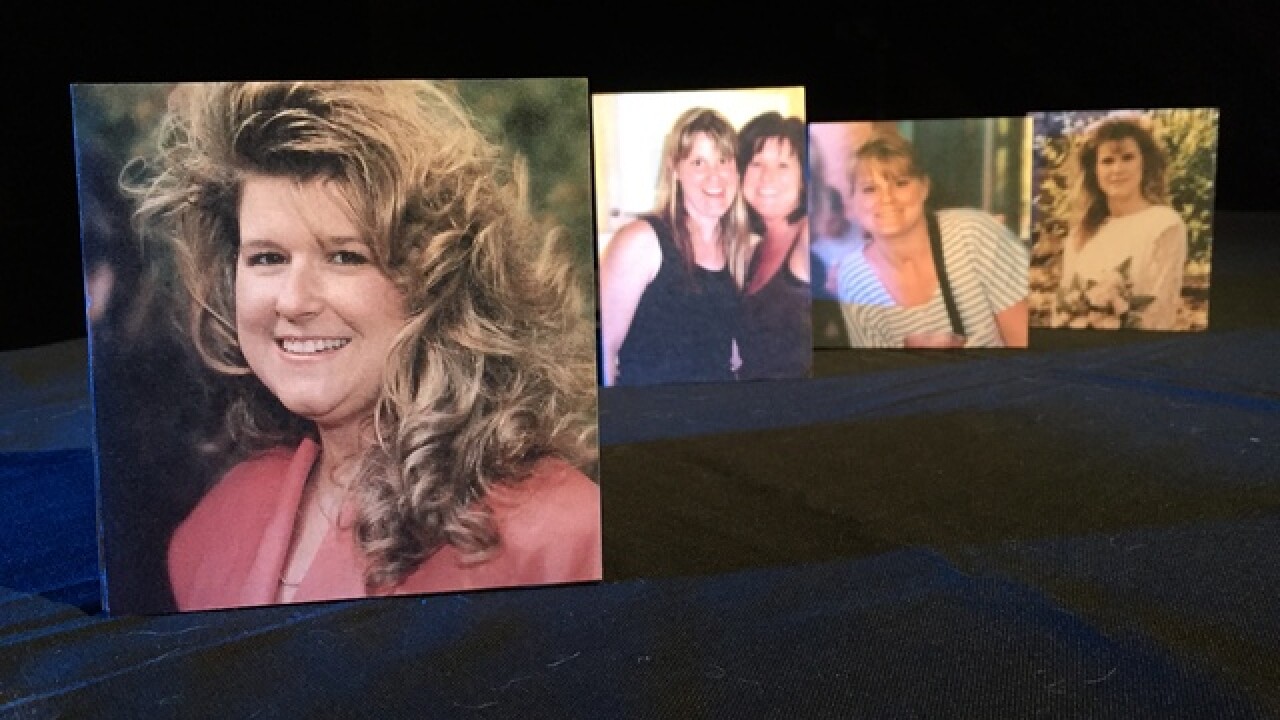 Courtesy family
<p>Janine Johler disappeared from Aurora in 2009. Her body was found dismembered a month later in a Colorado orchard 180 miles away.</p>

GARFIELD COUNTY, Colo. -- It takes at least three hours for Sue Kleppen to make the drive from Aurora to a particular orchard nestled among towering mountains west of Glenwood Springs, Colo., but she keeps going back year after year.

The idyllic scenery of the western Rockies holds unsightly secrets for Kleppen; it’s where the dismembered remains of her 38-year-old daughter, Janine Johler, were found by a ranch hand cleaning up trash along the property on June 12, 2009.

For more than seven years, the orchard off Creek Canyon Road, north of Highway 6 in Garfield County, has been the only place Kleppen and her family have had to call a memorial, of sorts, for Johler.

Kleppen hopes that someday she’ll never have to make the drive again.

“I’d like to have a headstone and a place where we could go to pay our respects, let her know that she’s still remembered and loved,” she says.

Kleppen will keep going back for the time being; her daughter’s body remains sealed away in evidence storage, and the case remains a mystery.

But she has hope that a fresh group of officers at the Garfield County Sheriff’s Office’s Investigations Division, who have revived the cold case and brought in state and federal investigations agents to help, could someday bring her closure.

“They tell us that they think the case is solvable,” Kleppen says.

Watch Liz Gelardi and James Dougherty's video version of this story in the player below or by clicking here.

A caring family woman descends into pitfalls of addiction

Janine Johler was the youngest girl in her family and cared deeply about them; she had long, strawberry-blonde hair, an infectious smile and a big heart, her mother says. She also typically moved around using a walker or cane, since she was left disabled in a car crash at age 15. She didn’t drive.

Johler had fallen on hard times in the late 2000s; she was using drugs and abusing alcohol, and had at times resorted to prostitution to make money, according to both authorities and her mother. She was living in Aurora and frequented several Colfax Avenue establishments, including the Red Coach Inn in Lakewood.

Police records show officers on several occasions were called to the apartment she at times shared with an on-again-off-again boyfriend, who allegedly beat her. Authorities also knew she was using drugs.

But Kleppen says Johler was attending Alcoholics Anonymous, and that her daughter’s commitment to her family never wavered. The two still talked on the phone every day, even though Kleppen lived in Kansas at the time.

“Sometimes when someone gets mixed up with the wrong people or drugs they’re not good to their family, but she was always so good to us,” Kleppen says.

In late April 2009, Kleppen says she visited her daughter for the weekend and that Johler seemed to be doing fairly well.

But a week later, Johler, then 38, was hospitalized after having a breakdown. Kleppen talked to her while she was in in-patient care, pleading with her daughter to stay in the hospital despite her objections.

Kleppen didn’t know it would be the last time they’d ever speak.

“I called her the next morning and they told me she had checked out and somebody had come and picked her up,” Kleppen says.

Investigators know the person took Johler back to her apartment, but she left in the middle of the night and was never seen again.

Kleppen reported her daughter missing May 7, 2009. She says she knew something was wrong and drove in from Kansas to help police look for Johler.

“I knew, yeah, because she and I talked every day,” Kleppen says. “I think I knew she was in a lot of trouble by then, if not already killed.”

She worked with police for a week exhaustively searching for Johler. Friends of her daughter’s had put up missing signs along Colfax. She and authorities initially suspected Johler’s boyfriend,  whom Johler had a permanent restraining order against and who had a history of domestic violence, according to a Vail Daily report.

But investigators interviewed and eventually cleared him since he was in custody at the time Johler disappeared, according to the sheriff’s office.

They interviewed friends and acquaintances of Johler’s and transients who frequented the area, but found no basis to some of the tips and suspicions they received.

But a month later, on June 12, an orchard ranch hand gathering trash 180 miles west of where Johler was last seen found a woman’s severed head amid the rubbish.

The Garfield County Sheriff’s Office was called in, as were investigators with the Colorado Bureau of Investigation. Other parts of her body were found scattered nearby, but after a multi-day search of miles of the surrounding area, investigators were never able to find all of her remains. What was found was eventually used to identify the body as Johler’s.

Kleppen says she was beside herself when authorities told her of her daughter’s death and the circumstances under which her body was found.

“They told me she had been found dead. I had known it – I really knew it in my heart,” she says. “And then to learn the manner of her disposal – nobody should have to be treated that way. So that stuff was very hard to deal with.”

Also elusive to investigators was a murder site – no blood was found anywhere nearby that matched Johler’s. Kleppen says she believes her daughter was killed in the Denver metro area and that her body was taken to Glenwood Springs to be dumped.

“I think it was probably in Aurora or Denver. I don’t believe it was actually in Glenwood Springs, but on the other hand, it could’ve been, I guess,” she says. “They have not found any trace, and you know for that type of a disposal it would’ve been a messy scene.”

Johler’s body was dismembered to a degree that the coroner’s office could not even determine her final cause of death, and investigators exhausted their leads and resources.

It stayed that way until 2014, when the Investigations Division at the Garfield County Sheriff’s Office found itself with a mostly-new team.

The office decided to take a new look at Johler’s murder, led by Investigator Megan Alstatt, who was one of the first detectives on the scene at the orchard the day Johler’s remains were found.

“At first I was sort of in disbelief,” Alstatt says of the scene. “We had dismembered remains dumped in the orchard, so that was something I had never seen before.”

Alstatt says she and a commander re-read the entire case file and audited the evidence in the case – going back through the interviews and case notes to decide where they should start digging again first – “sort of figuring out who Janine was.”

“I know [Johler] has a family. I feel very strongly about her family,” Alstatt says. “I care very much about them and I feel like they deserve to have this case solved.”

“Janine may have had issues with drugs or with prostitution, but on the other hand she was a daughter and a sister and a friend, and someone who people still love and still mourn. I would want people to look beyond that part of her life and realize that there’s just a much bigger story there,” she adds.

Alstatt and her team, which includes agents from CBI and the Federal Bureau of Investigations, are planning to re-interview some of the people detectives spoke with during the initial investigation.

“I hope that people now, maybe later, have had a change of heart. Relationships change. People change,” Alstatt says.

They have also gone back to Denver and Aurora to try and find any new leads.

She says there are still some people around the area – business owners, bar patrons and transients -- looking for answers in regard to Johler’s murder.

“There were people that were happy that the case wasn’t closed.”

Alstatt admits the team faces the same challenges investigators initially dealt with. There is no crime scene and few, if any, suspects. But she is hopeful that fresh sets of eyes and a refreshed passion for Johler’s case will lead to some closure for the family and an arrest.

“I don’t think that, no matter who you are, anyone deserves to get away with a crime like this,” she says. “[Johler] is a human being that was brutally killed, and I have this wonderful family who wants to know what happened to her. I care about them and I want to make sure that I can do everything in my possible power to give them that closure.”

Alstatt’s commitment to the case has Kleppen hopeful as well that perhaps she’ll someday have a permanent place where she can visit her daughter in peace.

“She’s redoing everything that was done seven years ago, so we’re helpful. Somebody will be found; somebody will come forward,” Kleppen says. “Somebody knows something somewhere because a crime like that – it’s not committed in a heartbeat…I would like somebody to just say what they know. I think someday we’ll get that. I hope, but we’re still waiting.”

But until the chance break comes, Kleppen will keep making the three-hour drive through the Colorado High Country to visit the orchard off the highway.

“Just one day at a time, that’s the only way that I can do it,” Kleppen says. “I have to keep that hope out there that somebody will come forward and justice will be served for Janine. I’m hopeful.”

Anyone who may have information regarding Janine Johler’s murder is asked to contact the Garfield County Sheriff’s Office at 970-945-0453 or Colorado Bureau of Investigation at 303-239-4300.

The Family of Homicide Victims and Missing Persons is also a resource for families of murdered and missing persons and does extensive work in Colorado.