An untold number of Coloradans have been treated by more than two dozen healthcare impostors in the last three years alone — people administering medications, providing counseling for sexual abuse or suicidal ideations and more.

The governor appoints boards to make licensure decisions for dozens of professions including medicine, nursing and psychology. The boards are also responsible for punishing those who are found to be practicing those professions without the necessary license.

WATCH THE VIDEO HERE or in the player below:

Denver7 Investigates discovered a breakdown in the system. Boards will often let investigations languish months after first receiving complaints about impostors from the public. Only then will they issue cease and desist orders telling the impostors to stop.

“We're an administrative agency,” said Karen McGovern, Deputy Director of Legal Affairs for the Colorado Department of Regulatory Agencies (DORA), which oversees the state’s professional licensing boards. “So, when we believe that a crime has been committed, we can refer the matter to local law enforcement, but that's as far as our tools go.”

Denver 7 Investigates discovered DORA fails to ensure impostors abide by cease and desist orders, and that those who receive orders to stop are rarely prosecuted.

DORA and its boards issued cease and desist orders against at least 28 people in 2015, 2016 and 2017 — people who “held themselves out” as a licensed practitioner without holding the actual license.  Denver7 compared those orders to criminal court records and found only two of those individuals were charged with the criminal penalty for unlicensed practice.  It appeared most had not been charged with any crime at all. 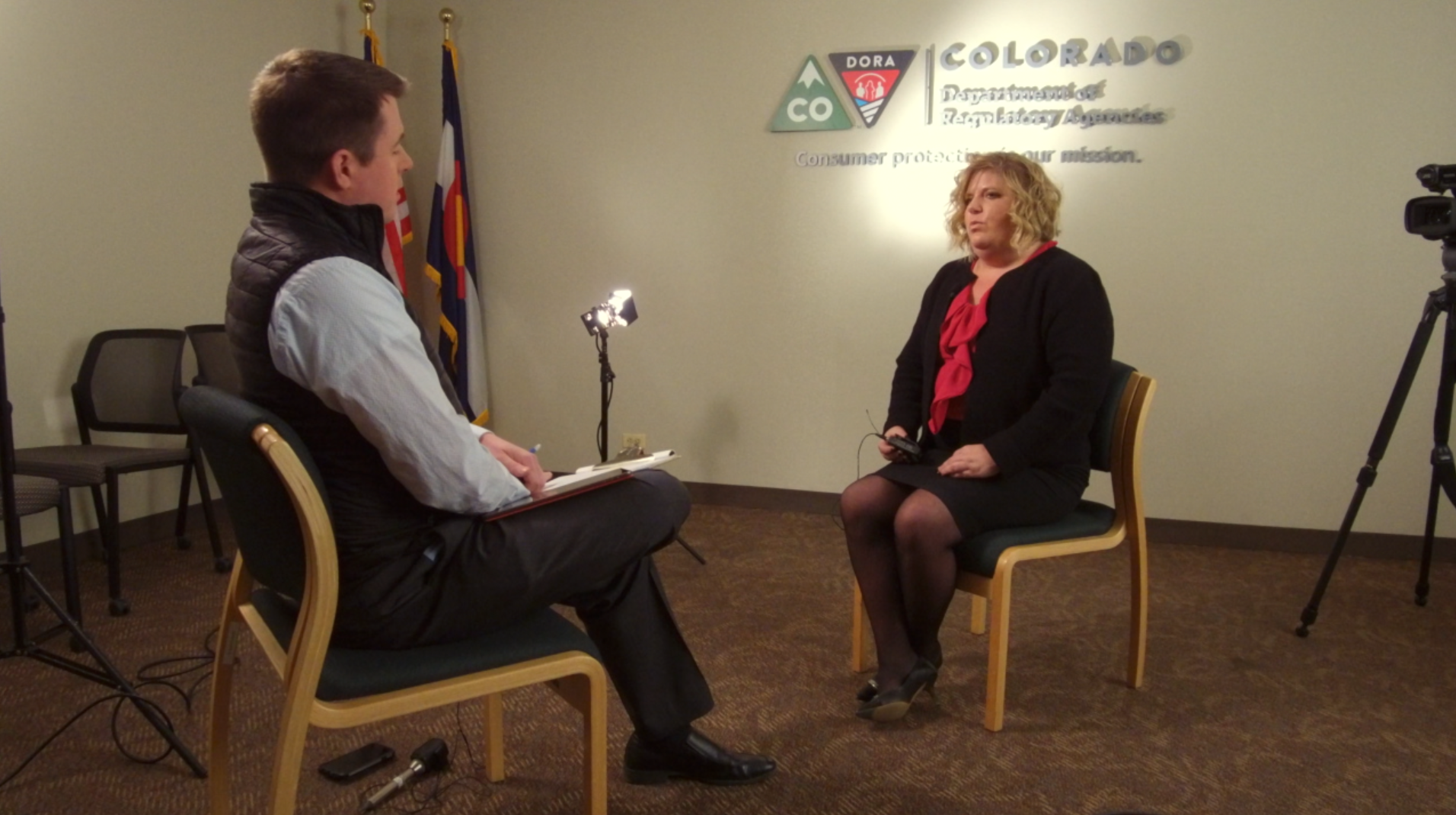 “Our typical process is that if patients can be or have been harmed, those referrals [to law enforcement] are made,” McGovern told Denver7 Investigates.

READ MORE: Detail on dozens of people given state cease and desist orders since 2015

Yet, even in several specific cases where complaints indicated the impostors actually treated unwitting patients, DORA could not document any referrals.

Impersonator promoted to Assistant Director of Nursing — without a license

In one alarming case, a woman posing first as a certified nurse's aide (CNA), then a registered nurse (RN), successfully gained employment at eight different medical facilities over the course of six years using other people’s credentials, ignoring two state cease and desist orders in that time.

State records indicate Jennifer Jackson doesn't have any education in nursing and has never held a nursing license in Colorado.

The Colorado Board of Nursing received a complaint about Jackson in 2013 and issued a cease and desist order against her nine months later, but she was not charged with a crime for unlicensed practice and the board didn't produce any evidence that it alerted law enforcement to her case.

A Denver police report shows officers were already investigating Jackson at the time over allegations she stole a Highline Rehabilitation coworker’s wallet.  The police report makes no mention of her licensure status, and court records indicate the charges she faced over using the coworker’s credit card were dismissed after she fulfilled the terms of a deferred sentence agreement.

Jackson seemed unfazed by the board’s order to stop her unlicensed practice. She continued to gain employment using credentials belonging to others, which she seemingly grabbed from the state’s public portal designed to give consumers the ability to verify a healthcare professional's license.

Jackson never faced any criminal consequences for her unlicensed practice until a registered nurse with the same first and last name received an anonymous phone call.

"A woman said, 'You don't know me, but I wanted to give you a courtesy call that someone is using your RN license number and they're not a nurse,'" the real nurse Jennifer Jackson told Denver7 Investigates.

The caller told her Jennifer Jackson was using her license to work as a nurse at the Woodridge Terrace nursing home in Commerce City.

The real nurse Jackson called Commerce City police, who promptly went to Woodridge Terrace, found the impostor working as Assistant Director of Nursing, and walked her out of the nursing home in handcuffs.

"What I want to stress is that nursing is not the kind of career that you can just learn on the job,” Jenny Jackson said. "The fact that she was doing these things...on her own accord, that she thought she'd maybe learn as a CNA, is irresponsible and very dangerous."

After Jackson left jail, records show she returned to work at Woodridge Terrace. A police report indicates the facility's staff “verified Jackson’s license” by checking with the Board of Nursing to verify the license. They allowed her to work on two separate dates after her arrest.

According to court records, law enforcement discovered she managed to find work at two more facilities — one in Colorado Springs, one in Lincoln, Nebraska — while awaiting trial.

Colorado Springs police arrested her and she now faces a criminal charge for the unauthorized practice of nursing — a misdemeanor — for the very first time.

McGovern said DORA would consider offering more tools to healthcare facilities to verify applicants actually have the license they claim to have.

“No system is perfect, and there's always going to be the person who figures out a way around the system,” McGovern said. “We react to that and try to put additional safeguards in place to try to prevent that from happening again.”

DORA admitted its boards do nothing to ensure an impostor is abiding by a cease and desist order, and rely instead on follow-up complaints.

“The expectation is that once a board, or an administrative agency, or a court, issues an order to stop, that that person will abide by the order,” McGovern said. “When we inform them that they're breaking the law and they need to stop, most people stop. But there is that group of individuals that, it doesn't matter who issues the order, they're going to continue with their practice.”

It appears one of those individuals is Randy Flynt, who received three separate cease and desist orders from the boards of psychotherapy, psychology and marriage and family therapists in early 2017 for practicing those professions without a license.

The cease and desist orders were issued after the state received a complaint in June 2016 from an Elbert County human services caseworker who said a client was receiving psychotherapy treatment from Flynt. The caseworker said in the complaint she repeatedly asked Flynt for his credentials, but he never produced them.

Denver7 Investigates searched Flynt’s name on Google in early 2018 and found him connected to Lighthouse Counseling in Pueblo on a website where he was listed as “Dr. Flynt,” a “clinical psychologist” for sexual assault survivors, people with suicidal tendencies and even those with eating disorders.

The website also said he has a "PsyD" degree from "Colorado."  It's not clear which "Colorado" university Flynt is referencing, but according to the National Student Clearinghouse, which verifies degrees for universities across the country, there's no record of Flynt in the University of Colorado system.

Denver7 Investigates called the number on the Lighthouse website, made an appointment for a free consultation, and brought in an undercover camera.

A Denver7 producer filled out forms in the waiting room that said the office takes insurance payments and charges up to $200 per appointment.

Flynt also told the Denver7 undercover producer he sees up to 35 patients per week, and when asked if he would need to refer the producer to another doctor to prescribe medication, he said no.

Minutes after that appointment, Denver7 investigative reporter Ryan Luby asked Flynt to explain what he said on hidden camera.

Luby: “Mr. Flynt, I’m curious to know if you’re licensed to practice psychology in the state?”

Flynt: “This is a church in here. We're running a church here.”

Luby: "You said you're a clinical psychologist, sir."

Before Flynt locked up his office and drove away from Denver7 cameras, he said his wife is the owner of the facility and she would call to clear up the confusion. When Denver7 called Flynt several weeks later, he said he has closed his office and is no longer continuing to practice.

Shown video of the encounter, DORA’s deputy director said its boards would take action about what Denver7 found.

“It is concerning," McGovern said. "I appreciate you bringing that to our attention. Because now that we know, we can take the next step."

In the wake of Denver7's reporting, a Colorado lawmaker is calling for action as well to ensure healthcare impostors face swift penalties if they're putting patients at risk.

This story is part of an on-going series of stories the Denver7 Investigates team is producing this week.  Join the team on-air on Tuesday at 6 p.m. to hear how the lawmaker plans to quickly address her concerns.

If you have been treated by a healthcare impostor and want to share your story, contact Ryan Luby at Ryan@TheDenverChannel.com, or Brittany Freeman at Brittany.Freeman@KMGH.com, or call the Denver7 Investigates tip line at (303) 832-TIPS, or send a text to (720) 618-4812.