The Missing Piece: Vegas Golden Knights make a connection with boy with autism 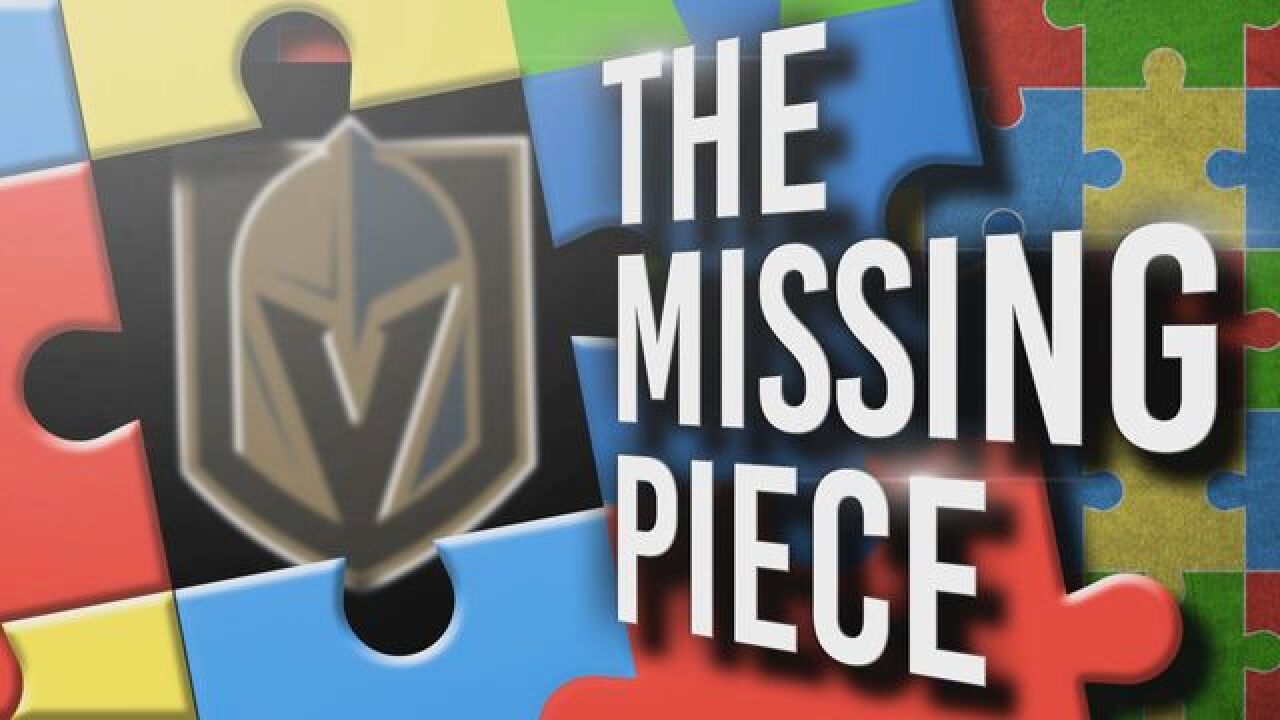 Ozzie's parents struggle with the signs and symptoms

Eight-year-old Ozzie Patton was diagnosed with Asperger's Syndrome at age 5. The Autism diagnosis was a bit of a relief to his parents, allowing them to finally understand the puzzle that is their son. His mother Jacquie first saw the signs when he was a baby.

"When he was a baby, I kind of noticed that he was distant, is how I would describe it. It wasn't like my older two where I could feel that connection holding him. When I would hold him, he would kind of just like not even look at me."

Ozzie's parents feared that their son didn't like them.

You go to hug Ozzie, especially when he was younger, and his hug would just be leaning into you." said Ozzie's dad Joe.

"One period in his life he could only wear a yellow shirt. He had two yellow shirts. And it was meltdown city if he did not wear the yellow shirt," Jacquie explained.

"We didn't explore it for a while but we just knew something was different with him," Joe added.

As Ozzie got older and went to school, more signs emerged that he wasn't like other kids. It was a range of behaviors from physical reactions to lack of emotional response. Jacquie noticed that her son Ozzie just wasn't interested in anything.

"I really didn't investigate it until he was about 5 when I saw what I guess would be stimming. So he would scrunch his face up and flex his arms like this, and I was like, what is happening? He didn't realize he was doing it."

It was a tough realization for his parents that Ozzie just doesn't understand people. "He doesn't know if he hurts people's feelings. He doesn't know sarcasm. He doesn't know that you're joking around with him. He is straight-line literal. Literal as it can be," said Joe.

Ozzie watches people and can repeat what they do, but he doesn't understand. In class, he was asked to write about his favorite sport, book or stuffed animal.

"And everything is nothing. What do you wonder about? Nothing. The answer was always nothing, which when you look at it you're kind of like, well, you have to have something that you like. Everybody has something that they like a little bit."

What Jacquie didn't realize then was that Ozzie just hadn't found "his something" yet.

Ozzie's good with facts not with people, but here are some people he knows a lot of facts about.

He just can't get enough hockey facts and history, all the way back to games in 1907. "Someone did a hat trick on the Blackhawks in like 19-something... three goals in 21 seconds."

He's made a connection with the team in a way he never has before.

"I think for me the hardest thing to accept is that he just doesn't connect the way other people do," said Jacquie. No cuddling or hugs, No hobbies or playdates with friends. And the excitement of birthday and Christmas presents that other kids love just wasn't there.

But that all changed with the Vegas Golden Knights.

Jacquie got emotional as she shared her memories. "The day that it changed for me was their October 10 game when they took down all their advertising and they put up the #VegasStrong."

It was Jacquie that first felt a connection to the team. "And for them to do that the way they did it, that's the day I said, whoever those people are I can get behind that. And then I would see them at blood banks and then I would see them here and there and in the hospitals and at headquarters and I said, those are my people."

The tragedy and the team had a deeper meaning for the whole Patton family. Joe is a LVMPD detective and one of the first responders to the Route 91 Harvest Festival shooting. He was working round the clock on the investigation.

"We went 25 or so days straight. In those 25 days, the side story is that the Knights are going on this epic run, this historic run!"

A friend gave Joe tickets to a game. "Hockey was our emotional healer"

"I think it was just something positive about Vegas in the worst time in our history," Jacquie added. And something very positive for Ozzie as well.

Ozzie went to his first Golden Knights game on New Year's Eve. It was the Golden Knights vs. the Toronto Mapleleafs. Ozzie shares his memories and a souvenir puck.

You can hear the pride in his father's voice as he describes Ozzie's experience at the game. "That changed everything for him. He like lost it, you know just cheering and screaming and hearing him yell."

The Golden Knights historic run was an escape for Joe and his fellow police officers. But for his son Ozzie it became an unprecedented escape from the confines of autism.

"We looked at each other and we were like, who is this kid?! It was like a switch went off in him." His parents realized that as the city was being transformed from hurting to healing, Ozzie was also transformed.

"I have all the hockey stuff under my bed," Ozzie explained. "Let's see, one two, three, these are the sticks. Ozzie puts on his mask and is ready to play. The Patton's tile floor becomes an ice rink and the sounds of the game fill the house.

He knows it's not as easy as the Knights make it look, but the game ramps up when Ozzie's older brother Asher joins in on the fun.

From games in the house to his first steps on the ice, Ozzie is finally making connections. His skating coach Samantha Liegner even got a smile from him.

We also had a surprise for Ozzie. At the first game in the second round of the Stanley Cup Playoffs, Ozzie's name appeared in lights in the arena and he got a special visit from Chance the mascot. Victories for both the team and this very special fan.

Ozzie's parents are truly grateful to the team. "It seems like everything they're doing, they're doing it the right way. And it's all about community first," said Joe. "I just really, really appreciate how they've embraced Las Vegas because in doing that, our son has embraced a side of him that we didn't know existed."

Ozzie has kept up his skating. He recently tried a group lesson and did so well that his parents have signed him up to skate twice a week at City National Arena. He's written about hockey for school assignments and for a music class he wrote a hockey-themed parody of a Hamilton song.

For a science experiment, Ozzie chose a project on materials that slide best on ice, using hockey pucks of course.