Here are the cheapest and most expensive Denver neighborhoods for renters

DENVER — Finding an affordable place to rent in Denver can be challenging.

Multiple real estate reports have put the median one-bedroom rent in the city in 2017 at more than $1,030, an increase of 1.6 percent over the previous year.

However, some Denver neighborhoods were well below the city's average. According to Zumper.com, the median rent for a one-bedroom unit in these nine neighborhoods was below $1,000 in December:

With above-average rents, the Central Business District, Cherry Creek, Belcaro and the Country Club continue to be among the priciest rental neighborhoods in the city, according to Zumper.

The Most expensive neighborhood to rent a home or an apartment in Denver is the Golden Triangle, with a median one-bedroom rate of $2,000. The December 2017 rate represents about a 4 percent decrease from the previous year.

Some Denver neighborhoods were climbing faster in price than others last year. According to Zumper, overall, the city’s neighborhoods saw a mixture of upward and downward rental growth with no concentration in any specific parts of the city last year.

This rent map from Zumper shows the rate at which rent prices increased or decreased in all of Denver's 78 neighborhoods: 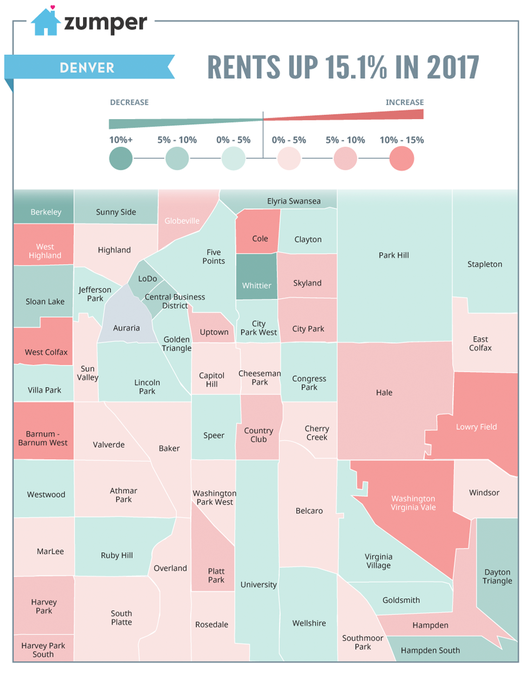 See the full data, including a breakdown of each neighborhood and its median one-bedroom rent.