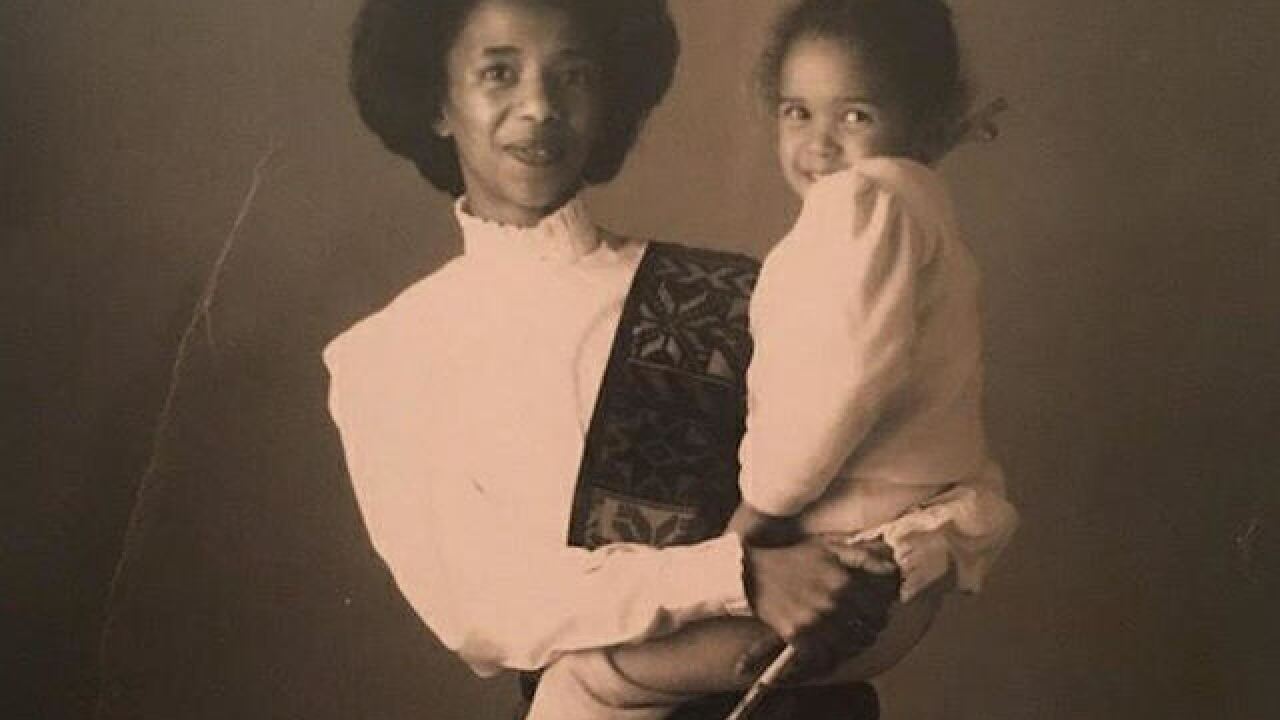 Deseret News/contributed
<p>Bianca Bowes with her son, Neville, 1. The Ogden, Utah, mom says she will pass on to her son lessons from her mother.</p>

Insure.com's annual Mother's Day Index says her worth inched up a bit this year, based on what she'd make if she was paid for all she does. But the estimated $68,875 "salary" is nothing compared to the value that women who are mothers place on their own mothers.

Moms and their example are often the training ground to which new mothers turn as they parent their own children, deciding which pieces of their childhood to replicate, which well-timed advice to offer their kids.

The handing down of lessons, both the explicit and the observed, is an intergenerational transmission of love that includes both wise and humorous lessons, with a dash of practical advice and, sometimes, heartache.

Bianca Bowes of Ogden, Utah, has one son, Neville, who just turned 1. Bowes admires the strength and faith of her "Mummy," Abigail Jansen-Bowes of Irmo, South Carolina.

"She grew up in apartheid in South Africa, which is a story for another time," she said. "But her life struggles have shaped me. She had an absentee husband. She raised three amazing kids practically on her own. She did it with tough love and grace and faith.

"My Mummy taught me to be strong, to take whatever life handed me with positivity and gratitude and grace. She taught me to have a deep love for God and believe in the goodness of all people, no matter where they come from, what language they may speak, what differences we may have," Irmo said. "She taught me that education and truth will set me free and she was so right. My mother’s most powerful lesson was to be what God intended me to be, not what other people allowed or expected me to be, and I live that every day.

"She is my mentor, my strength, my conscience, my best friend, and one of the greatest loves of my life."

What from her mother will she give to her son?

"I will do my utmost to be half the mother she is to me for my son. He is my reason for being here on the planet and I love him like I’ve never loved anyone or anything before. My beautiful Mummy and my adorable son have given me such a wonderful gift: life. I will teach my son to have an attitude of gratitude and to be kind to all humans," she said.

Those are all lessons from her mother's life, Irmo said.

Two quotes she heard often growing up come to mind when Jacqueline "Jackie" Abramian ponders what she learned from her mother that she especially wants to teach her kids.

Parideh Berenji Abramian, who lives in Boston, likes to say, "Never give up — and never say I can't." She's equally fond of, "Always put to shame the ignorant with your politeness," says her daughter, who lives in Kittery, Maine.

This daughter describes her mother as strong, determined and a woman who stood out among her contemporaries throughout her life. And time — Abramian's mother is 86 now — hasn't diminished this "force that inspires and supports anyone in need." In all her life roles, from wife to working mom and later widow and retiree, "she has been ahead of her time in gender equality," as capable as any man. In fact, she's an octogenarian who still dismantles and fixes broken electric devices. Hand her a broken toaster and you'll soon be having toast.

Camila Williams says she learned to push herself and do more than she thought she could by watching the example that her mother set. She also learned to trust that things would work out for the best. The two women live next door to each other in Los Angeles.

Her mom, Sonia Rodrigues, was a skilled architect in Brazil who in America, where their family settled, cleaned toilets to put herself through night school to learn U.S. building code. She started her own business, but lost everything in a housing crash. She was no stranger to starting over and rebuilt her business.

But challenges weren't through with her. After a brain stem stroke that left Williams' dad severely disabled and in long-term care, her mother again started over while providing for a disabled husband.

It was her resilience and example that inspired her daughter to apply to graduate school and start her own business.

"She supports me and motivates me whenever I feel like quitting … which is often. So much of this life is the message, 'It’s too hard, just give up already' and she challenges that with 'Don’t give up, it’ll work out … eventually,'" says Camila, a mother to year-old twins and a 3-year-old. "I hope to teach them the same things my mom taught me and to motivate them to do more than they can imagine for themselves."

Houston's Cassaundra McAuliffe inspired her daughter, Shanalee Sharboneau, of Austin, Texas, to write a children's book series about a mother's love, the titles starting with "My Mama Loves Me [mandrillapp.com]." And the lessons, which continue through nearly daily phone conversations and monthly visits — because "I need her" — help Sharboneau as she raises her own son, Braydon, 8.

"What my mother taught me is to have great self-esteem, yet not at the cost of others. To know you have no limits, and you can accomplish anything in life. You have all the talents that God has given you, and you only have to use them," says Sharboneau.

"When my son Braydon was born, I wanted to bestow as much healthy self-esteem as my mother did for me," she says, adding she has encouraged her son's pursuits, from Irish dancing to sports to being a straight-A student who loves playing drums and guitar.

Moms help their children navigate a complex world. And tough times are as valuable to forging a mother-daughter bond as good times are. That's the key point Jill McKay of Port Deposit, Maryland, tries to pass on to her sons, who are 12 and 10.

Life isn't supposed to be easy; it requires effort, according to her mother, Leslie Hickman, of Smyrna, Delaware.

"My mom taught me that life is HARD for everyone at one time or another. This seems so basic, but in our social media world of perfection, it constantly comes to mind. When I feel like others are more successful, things go their way more easily and in times of loneliness, I hear her reminding me that life is hard."

Sandra Elia, of Toronto, learned hard lessons from her mom, Gilda Elia, who died 12 years ago but struggled mightily for years with mental illness that included bipolar disorder and food addiction. Elia says her mom's tears often reduced her to tears and — as children often do — from a very young age thought she was to blame for her mother's challenges.

Despite being neglected much of her childhood, Elia is thankful for lessons from her mom — and loves and misses her. She plans to pass the big lessons on to daughter Sofia, now 7.

"I made my peace with my mom before she passed away," Elia says. "Diabetes had ravaged her body, she could not walk unassisted, her eyesight was minimal and she was incontinent. She had lost all of her teeth and food would run down her top. I would look at her in her totality and I accepted her exactly as she was. I loved her exactly as she was. I surrendered to her life choices and where they had brought her. I freed my mom and I freed myself.

"I tell you this not to disparage my mom, but to honor her. She was my greatest teacher and I will forever love her. She is gone and I believe she is whole again and we can know each other in a new way. I had been searching for unconditional love my whole life from my mom. My journey has taught me until I am able to give it to myself, I cannot give it to another or receive it. It all begins with me.

"This is the gift I will pass on to my daughter."

Syndicated author of the "It Is What It Is" humor column and parenting expert Lisa Sugarman says good moms like hers are "endless wells of love and support and advice," even when the recipients of that largesse must mature into receiving it. Her mother's wisdom is always timely, she notes.

"At almost 80, my mom's endless pool of knowledge and advice is just as deep as ever," she writes of her mom, Sandy Eigner, adding the message she most wants to pass to her own daughters is the notion that "if you cast enough bread out on the water in your life and your work, eventually, something will come back to you. She's always been a big believer, my mom, in following your passion and putting yourself out there in as many ways as you can to as many people as you can, to encourage the biggest return."

Sugarman, who lives in the Boston area while her mom lives in Florida, says she's seen the philosophy in action as unexpected doors have opened for her in her writing career.

Robyn Mancell's mother, Barbara Woods of Winston-Salem, North Carolina, now 80, was a stickler for requiring her children to take responsibility for their own actions. Mancell, who lives in Rancho Cucamonga, California, sees great value in that and demands the same of her own three sons.

"My mom did not accept excuses and we were not allowed to play the 'blame game.' Even when my marriage was not working out, the first thing my mother said to me was, 'You're the one who married him and you should have paid more attention to the signs.' … She always asked us what we could have done differently to avoid a bad situation. 'You have choices and I suggest you make better ones.'"

Best-selling author Milana Perepyolkina of Salt Lake City was born in Estonia when it was part of the Soviet Union. She grew up watching her mom endure long work days and stern lectures about the superiority of the Soviet system and the "importance of strict atheism, even though she had a much more magical and spiritual view of the world and her place in it."

That ideological duel left her mom heartsick and unwell, Perepyolkina says. Nor did they have enough good food and clean water. "We were all sick, undernourished or unhealthy in some way or another and our souls suffered," she recalls of that time.

Diagnosed with cancer, her mother fought back in her own way. She changed her diet to high-energy plant foods. She took ice-cold showers. And she went outside every day, regardless of the weather, slowly building her strength until she could walk for hours, says her daughter, who passed along many of the principles in her book, "Gypsy Energy Secrets: Turning a Bad Day into a Good Day No Matter What Life Throws at You. "

Perepyolkina emphasizes those same principles to her own daughter.

The elder Perepyolkina also prayed every day, throughout her illness. Her daughter recalls: "She repeated over and over again, 'God, if it is your will, allow me to heal. Not for me but for my children, so that they have an example of what is possible.'"

Teaching what is possible is among the best of a good mother's jobs.