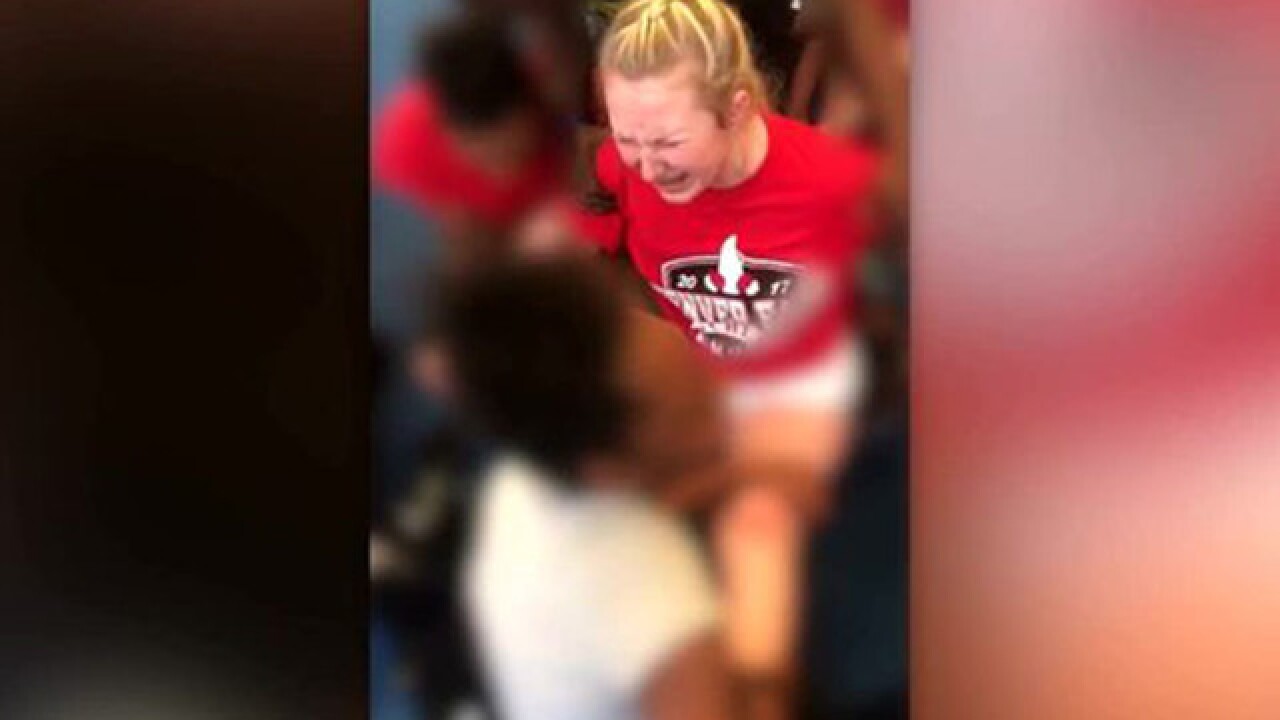 DENVER – Five school officials at East High School were placed on administrative leave Wednesday after the Denver Public Schools Superintendent was made aware of distressing video showing cheerleaders being forced into splits over the summer.

“We absolutely prohibit any practices that place our students’ physical and mental health in jeopardy,” said DPS Superintendent Tom Boasberg in a statement sent to Denver7. “We do not and will not allow any situation in which a student is forced to perform an activity or exercise beyond the point at which they express their desire to stop.”

The parents of Ally Wakefield told Denver7 on Thursday they reached out to the school to take action after their daughter showed them excruciating video depicting the East High cheer coach forcing Wakefield into a split.

In the video, Wakefield cries out in pain, begging her coach and teammates to stop. Despite her cries, the group continues to force her into a split.

Kirsten Wakefield, Ally's mother, said the video was shot on June 6, and explained she consulted with a doctor after her daughter's leg was injured during the cheer practice.

"When Ally showed me this video, and five others of different teammates, I couldn't stop crying after witnessing the pain and abuse they were suffering," Wakefield said.

Wakefield said what concerned her nearly as much as the alleged abuse was that the coach reportedly told players never to share videos taken in practice outside of practice and never to anybody off the team.

"If he thought that the technique was appropriate to be utilizing, he would have no need to try and stop the girls from sharing what had happened," Wakefield said.

Denver7 obtained the videos depicting other girls, however we are only posting the video depicting Ally due to her parents' consent.

In an updated statement sent to Denver7 Thursday evening, the DPS Superintendent said a notification was sent to the district's athletic directors emphasizing the district does not allow the use of "forced splits" or "any other activity that puts a student’s physical or mental health at risk, or in which a student is forced to perform an exercise beyond the point at which they express their desire to stop."

Boasberg also said he and Deputy Superintendent Susana Cordova called every family of the East High School cheer team to offer their support and answer their questions. You can read his full statement here.

East High's Assistant Principal Jason Maclin will serve as interim principal during the investigation, which includes the school district’s Department of Safety and the Denver Police Department.

“With regards to certain videos, I cannot state strongly enough – as the superintendent of the school district and as the father of two high school-aged daughters -- that the images and actions depicted are extremely distressing and absolutely contrary to our core values as a public school community,” Boasberg said.

Denver police released the following statement about the video:

"On August 23, 2017, the Denver Police Department received anonymous information regarding the incidents involving a cheerleader coach at East High School, and Denver Police child abuse detectives immediately began an investigation. This is an open case, therefore no additional details or videos will be provided at this time."

Williams, the assistant cheer Coach at East High, was a paid consultant for the Boulder Valley School District's cheerleading squad in 2015 and 2016, according to a statement from Boulder High School principal James A. Hill.

In a letter sent to parents from that district on Thursday, Hill said the school district is working closely with law enforcement and encourages families to contact Hill directly or to also call Boulder High's School Resource Officer Brent Biekert with any information they may have that could help in the investigation.

"Please know that we believe this behavior is not acceptable. It does not reflect the values, the policies, or the practices of Boulder High School or the Boulder Valley School District."

Also on Thursday evening, the DPS School Board sent a letter to parents regarding the allegations of child abuse, saying in part, "Our hearts go out to the students, families, educators and broader community as we all seek to understand what happened."

The letter goes on to state that the district will not tolerate "athletic or school cultures or practices that place our students in danger."

It then reads, "We are reviewing the supports and resources currently in place for students and educators, and what is needed to ensure our school communities are educated about and empowered to prevent traumatic situations such as those depicted in the videos of East cheer practice."