Colorado's 13 quirkiest festivals (and where to find them) 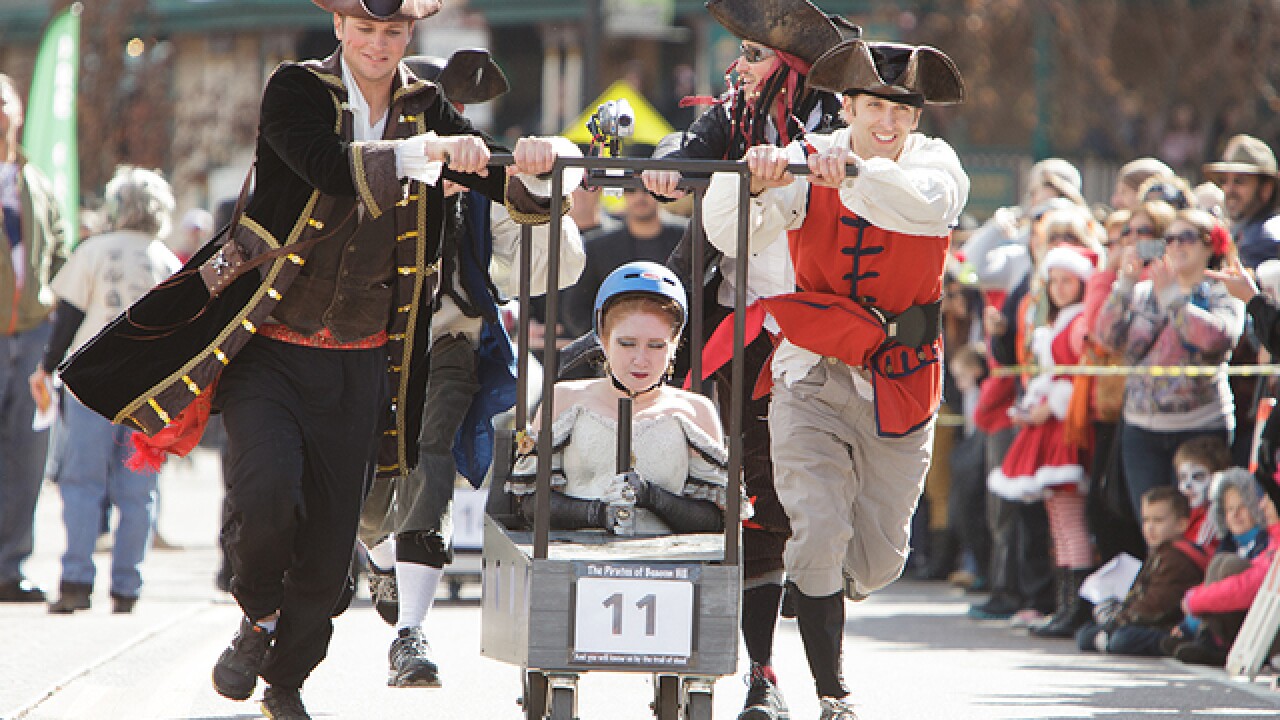 DENVER – There’s no shortage of festivals around Colorado and when it comes to odd ball celebrations and peculiar events, the state doesn't disappoint.

From a race in which humans plead with their burros to get to the finish line to a festival in which people toss hated holiday threats, these are 13 quirky Colorado festivals you should put in your bucket list.

Central City, Colorado – To be announced

The legend goes that Lou Bunch, a madam who ran brothels in Central City during the town’s gold mining boom, converted her houses into makeshift hospitals after an epidemic of tuberculosis broke out. With the help of her girls, the group of sex workers nursed miners back to health, therefore saving the town’s economy.

To commemorate Madam Bunch and her ties with the city’s local history, Central City now hosts a myriad of events including a Madams and Miners Ball, food, beer, and the famous bed races.

Back in 1945, a chicken named Mike survived the chopping block when, due to some circumstance or another, most of its brain steam survived the ordeal. With the help of water and grain delivered via eyedropper, the chicken was able to survive for 18 months. The festival is dedicated to the fowl equivalent of Grigori Rasputin, if you will.

During the first weekend of June, you can enjoy a disc golf tournament, rooster-calling contest and poultry show, among other things.

It’s no secret most of us are not fond of fruitcake and would rather toss it than be subjected to another bite during the holidays. The idea wasn’t lost on the people of Manitou Springs, who in 1995 started tossing them around in downtown.

So each year, people come together to test their fruitcake tossing distance, accuracy and speed, using mechanical devices to launch the holiday desserts. There’s also a fruitcake costume competition, libations and a fruitcake bake-off. And yes – there are prizes for winners of each competition.

It’s no Walt Disney conspiracy theory – it’s better than that. Frozen Dead Guy Days pays homage to a Norwegian man who’s body has been cryogenically preserved on dry ice in the mountains overlooking the town for nearly 30 years.

The story goes something like this: Bredo Morstoel was a minor public official in Norway, and when he died in 1989, his grandson, Trygve Bauge, had him cryogenically preserved in the hopes he could one day be re-animated. The body was eventually moved to Nederland, where Bauge had plans to build his own cryonics lab unit. Those plans came to a halt when he was deported.

The body is still there, and every year Bauge pays $9,000 to deliver between 900 to 1,200 pounds of dry ice every week to cover his grandfather’s frozen sarcophagus.

The party marks the end of winter with outrageous traditions like coffin races, a costumed polar plunge, brain-freeze contest and other seasonal-themed fun.

For nearly 90 years, Donkey Derby Days has been a staple celebration of the City of Cripple Creek. The celebration sees people from all over the world descend on downtown, in order to see a race inspired by the town’s resident donkey herd – believed to be distant descendants of the original donkeys from the town’s Gold Rush days. Enjoy live entertainment, heritage competitions and other fun family activities.

The Town of Breckenridge invites snow lovers and ski junkies to join Ullr Fest, a celebration in honor of the Norse god Ullr, the patron saint of skaters and skiers. Join hundreds of people donning Viking hats as they try to break the world’s longest shot ski record at Ullr Shot Ski, take part in the Ullr Parade down Main Street, burn old skies at the annual ceremonial ski burn (and also retire your Christmas tree in the process) at the Ullr Bon Fire, and prove your dedication to the cold at the Ullr Ice Plunge.

The story goes that Emma Crawford went to Manitou Springs near the end of the 19th Century to find a cure for her tuberculosis in the cold-water mineral springs of the area. After falling in love with the mountain town, her dying wish was to be buried atop of Red Mountain. After her passing, her wish was granted and with the help of eleven other townspeople, her body was carried up the 7,200-foot slope and buried near the summit.

But in 1929, Crawford’s coffin raced down the mountainside – a result of years of harsh winters and spring rains in the area. Young children who happened upon her remains found only the casket handles, a nameplate and a few bones, according to legend.

Since 1995, the City of Manitou Springs has honored her memory why a coffin race that sees up to 70 teams racing coffins down Manitou Avenue, with each team made up of one Emma and four runners dressed in costume. There is also a parade, live music, food vendors and more.

Just as the name suggests, the Telluride Mushroom Festival is about all things fungal. You’ll find yourself in the great company of mushroom enthusiasts, experts, and scientists. Interests range from the scientific to the culinary, from the curious to the investigative. Some activities of the festival include lectures by renowned experts, cooking with mushrooms, and guided hikes that focus on mushroom hunting and identification.

Head down to Leadville for the International Pack Burro Race, a 21-mile race in which humans lead (or rather, plead) with their stubborn partners to get to the finish line from downtown Leadville to the top of Mosquito Pass and back.

After the race, which starts at 11 a.m., don’t forget to check out the gun fighters and skits that take place throughout the day.

If you love bacon, then you’ll want to go to Keystone for the Bacon and Bourbon Festival, where you’ll be able to pig out on all things bacon – and we mean all things – cupcakes, donuts, you name it. Did we mention you get to wash it down with a nice glass of bourbon? And yes, there’s live music, too!

Who will claim the prize for the largest pumpkin in southern Colorado? Come and find out at the Giant Pumpkin Festival in Old Colorado City! There will be a pumpkin patch, a costume contest, face painters, balloon artists and more.

Every year, the Mile High City is recognized among the best beer capitals in the country, so why would the City of Denver not have another excuse to enjoy its many selections of craft breweries? The Denver Beer Festivus happens in December and most festival goers celebrate the holiday by showing up in their ugliest holiday attire.

Enjoy bird-watching? Know someone who finds the experience soothing for the mind?  Then head to southeastern Colorado to see the migration of the white snow geese, which happens in February every year. Watch the birds, take the tours and learn about the geese while listening to experts on the subject during the High Plains Snow Goose Festival. There’s a photo contest for those willing to test their skills as well.