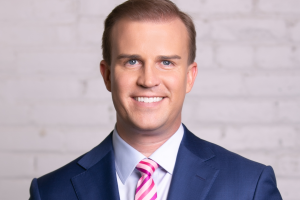 Contact7 Investigative Reporter and National Correspondent for The NOW Denver.

Jace Larson returned to Colorado to join Denver7 as an investigative reporter and work as a director of national content for E.W. Scripps.

Jace’s stories help bring about change and hold people in power accountable. He looks forward to doing the same honest, fair and important reporting in Colorado as he’s done before. Jace won the Alfred I. duPont–Columbia University Award while in Denver for his investigative work in disrupting a foreclosure scam that took homes from Coloradans illegally. U.S. Marshals traveled overseas to arrest the scam’s orchestrator after Jace’s reporting. He was the first reporter to interview a now-convicted terrorist who planned to travel from the Denver area to the New York City area to take part in an attack. Larson has won Emmy and Edward R. Murrow awards, also.

While in Texas, Larson exposed the story of a mentally ill rape victim who was put in jail for 27 days after having a break down on the witness stand. Prosecutors wanted to make sure she would return to testify against her rapist. The story sparked worldwide interest and had lawmakers and law enforcement calling for changes to state law. The story created immediate change in the county jail system and the district attorney instituted new policies for witnesses held in jail. His follow-up reporting on the issue brought to light another rape victim held in jail for nearly two months so she could be forced to testify against the man who raped her.

Jace’s reporting also profiled a witness to murder who was jailed for three months because he was homeless and prosecutors worried they wouldn’t be able to find him when the trial started. His continued reporting after several Houstonians were killed during historic flooding resulted in significant safety improvements in the City of Houston. Firefighters received swift water rescue training that the city previously refused to provide. New highly-rated life jackets were added to all rescue boats and the city retooled its emergency radio system, following Larson’s repeated reports showing how issues cost lives. Using internal city emails obtained through sources, Larson challenged the mayor’s version of events and ultimately showed how her previous statements on flood response were at odds with claims she made after the flood.