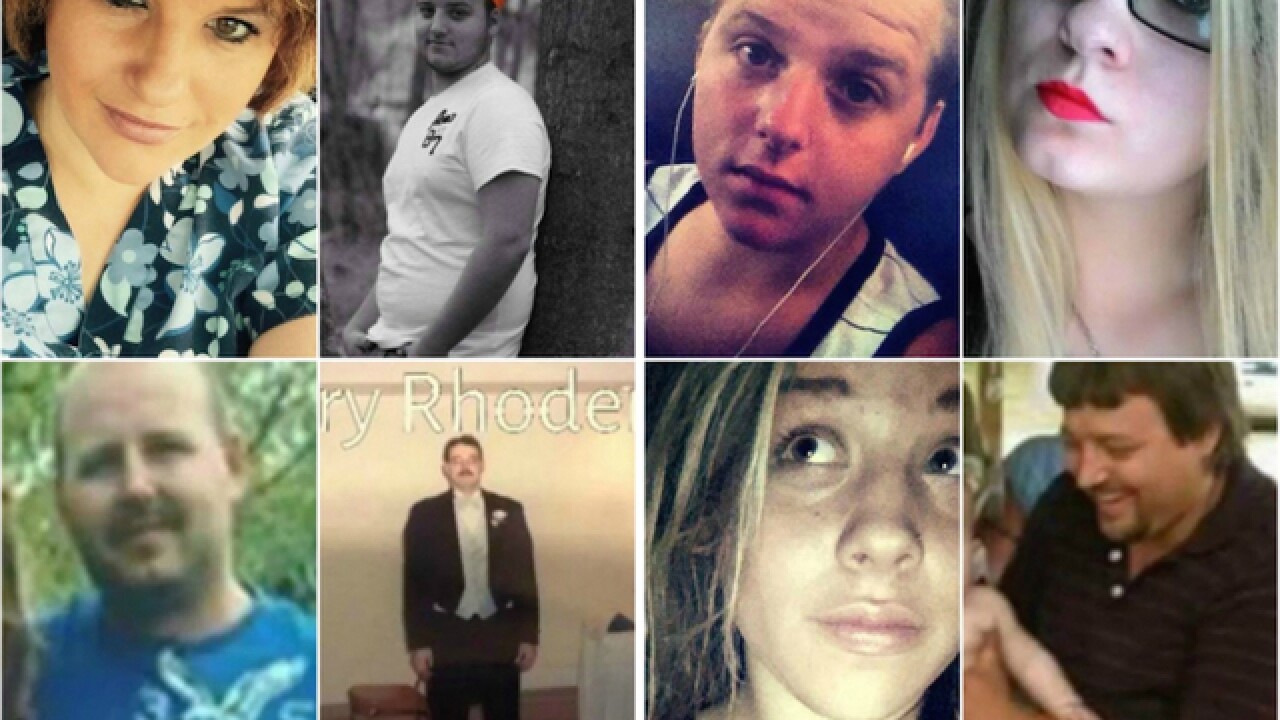 WAVERLY, Ohio — Four people are charged with planning and carrying out the murders of eight people in Pike County, Ohio in April 2016.

One of the suspects was arrested in Lexington, Kentucky. A Lexington Police Department spokesperson said Lexington officers, with the FBI, assisted in the arrest of George "Billy" Wagner III.

#BREAKING After two-and-a half years 4 members of the Wagner Family have been arrested in connection with the Rhoden murders. On my way to Pike Co now for a press conference at 4pm. @WCPO pic.twitter.com/45qW3ZebuV

Four members of the Wagner family, of South Webster, are in custody:

The culprits, DeWine said, were the child's father and members of his extended family. According to their indictments, four of them plotted meticulously to kill the Rhodens on April 22, 2016, and conceal the evidence after. Two more face charges of aiding in the cover-up.

"We always felt from the beginning that the perpetrators were very familiar with the victims and their homes," DeWine said. "The Wagners certainly were."

The victims were found shot to death at four homes on the morning of April 22, 2016. Officials have said they believe the shootings took place hours earlier.

Authorities had suspected there were multiple attackers who were familiar with the victims' homes and the surrounding area, about 70 miles south of Columbus.

All of the Pike County massacre victims were shot in the head at point-blank range and seven of the eight were shot multiple times, according to preliminary autopsy reports viewed by the WCPO I-Team in September.

Social media posts drove speculation about a break in the case in August of this year. At the time, an Ohio Bureau of Criminal Investigation spokesman said the posts circulating online were nothing more than "bad Facebook rumors."

The suspects arrested Tuesday in the Pike County massacre have drawn scrutiny since early in the investigation.

One of the eight victims, Hanna Rhoden, had been in a custody dispute with Jake Wagner over a child they had together, according to her grandfather.

Hanna Rhoden, was 19 when she was killed. Jake Wagner also faces charges of unlawful sexual conduct with a minor for allegedly having sexual contact with Hanna when she was 15 and he was 20.

A month later, Dewine announced that authorities were looking for information about the four Wagners. It turned out that they had moved to Alaska.

But little information trickled out after that, until this past August, when Pike County residents once again reported seeing SWAT vehicles at a farm owned by the Wagner family. That prompted unfounded online that arrests had been made in the case.

Evidence shows that Billy, Angela, George and Jake Wagner developed an elaborate plan to kill the Rhodens, according to DeWine. He said they studied the victims' habits and routines and knew the layouts of their homes.

The Wagners bought ammunition, a magazine clip, brass catchers and a bug detector to prepare for the crimes, according to the indictments. They also studied "counter-surveillance devices" on the properties, including pets, and tampered with phones; cameras; and parts of a home security system.

In addition to the murder charges, members of the family are facing charges of conspiracy, engaging in a pattern of corrupt activity, tampering with evidence, unlawful possession of a dangerous ordinance, forgery, unauthorized use of property, interception of wire, oral or electronic communications, obstructing justice and aggravated burglary.