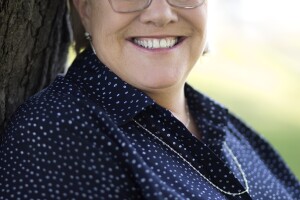 What is your job?
I lead the newsroom and our production of news on all platforms. That means I oversee the teams that produce our newscasts for television, streaming and digital. I manage 100 Journalists and help guide the daily editorial decisions as we give our viewers and readers solid, unbiased coverage of the news in the Denver metro and beyond.

When did you start working here?
I started working at Denver7 in the summer of 2017.

Where else have you worked?
I started my career in Denver in the early 80's! I worked as a production assistant, writer and producer at two Denver TV stations before leaving to take a 5pm producer job in New Orleans. I thought I would be gone from Denver just a couple of years but opportunities kept arising in other cities. In addition to Denver and New Orleans, I've worked in Baltimore, Oklahoma City, Washington DC, Philadelphia and Seattle.

Where did you go to college?
I received my Journalism degree from the University of Colorado-Boulder. Go Buffs!

Where did you grow up?
Technically, I grew up in Littleton but it has since become Centennial. I went to Carl Sandburg Elementary, Newton Middle School and Arapahoe High School where I was the co-editor of the newspaper.

What are some of the biggest news stories you have covered or led coverage of?
I was the Managing Editor of the ABC affiliate in Oklahoma City when the Murrah Federal building was bombed in 1995. At the time, no one imagined a domestic terrorist would target a crowded building in the middle of the country's heartland. To this day, the images of that day, hurt my heart. I was the Assistant News Director for WTTG-TV in Washington DC on 9/11. Never did I think a commercial plane would be hijacked by terrorists, crash into the Pentagon and not be the biggest story of the day in our country. While in DC I also covered the sniper attacks, many of which happened within a few miles of my home in Maryland. Those were three of the scariest weeks of my life as the snipers randomly shot and killed people doing everyday tasks like mowing the lawn, getting gas and buying groceries. I also covered elections and inaugurations, the Monica Lewinsky scandal, the Clinton impeachment and the funeral of Ronald Reagan. I left Washington to run a newsroom in Philadelphia and then one in Seattle before coming home to Denver!

What is your philosophy on news?
Those of us in local Journalism have a huge obligation to the communities we serve. We have been entrusted with a "mega phone" if you will, to tell people what's happening here and beyond. We owe it to our viewers and readers to be unbiased, honest and true. It's why I believe so much in our "360" storytelling. We also owe it to our customers to hold people in power accountable, to warn them when their safety is in jeopardy, to help them navigate the issues impacting their lives. I believe strongly that we should use our powers for good! We have the unique ability and resources to bring our communities together to help people in need. We can raise money, collect food and mobilize volunteers. We can and should make a difference. We live in the neighborhoods we cover. We all need to take good care of them and those around us. And that's why we've started "Denver7 Gives", the charitable fund designed to help people down on their luck, victimized by criminals, impacted by disasters and sadly left with few places to turn.

What do you love about living here?
I love being home! I love Colorado and seeing so many people with whom I grew up. I love Wash Park and Vail Village, Gore creek and really good green chili! Colorado is my happy place!