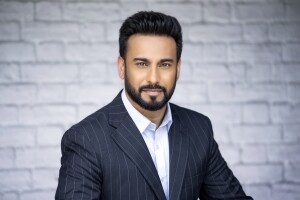 He is an Emmy award-winning journalist with more than 20 years of experience in local, network and investigative reporting. Prior to joining the national team, he spent three years as a reporter and fill-in anchor for NBC Chicago. Before that, he was Chief Midwest Correspondent for Al Jazeera America, covering news from all over the nation. Previously he reported for WTTW’s flagship nightly news magazine show Chicago Tonight and was a CNN international correspondent and bureau chief. His reporting and photography have been featured on CNN, PBS NewsHour, Al Jazeera, A&E, The Oprah Winfrey Show, Access and in The New York Times.

While at NBC Chicago, Quraishi covered the day’s top stories, filled in on the anchor desk and co-hosted of The Rundown – NBC Chicago’s Instagram Stories newscast.

With Al Jazeera America from its launch in August 2013, Quraishi reported from throughout the Midwest and around the country. His reporting included the ongoing gun violence in Chicago, immigration, healthcare, education and the debate over minimum wage. He also covered the massive Colorado flooding in September 2013 and was on the ground just hours after massive tornadoes ripped through central Illinois in November. Quraishi reported from Havana, as a historic thaw in relations between the U.S. and Cuba were afoot. Hi was also part of the teams covering the 2016 Presidential campaign and Pope Francis’ first visit to the United States. He was the network’s lead reporter as unrest, rioting and looting began in Ferguson, Missouri after the fatal shooting of Michael Brown. Quraishi and his crew themselves were fired upon without warning by police using rubber bullets and tear gas while attempting to report live from the area. Collectively, He spent over three months reporting in Ferguson on the aftermath of the shooting, the ensuing debate over race and policing and the Department of Justice investigation into policing procedures there.

In 2011, he co-produced the award-winning documentary "Fordson" about the Arab-American experience in post 9/11 America. The film released in theaters nationwide and screened at the U.S. State Department. The acclaimed documentary premiered at the Slamdance Film Festival in Park City, Utah and won major festival awards around the country. After receiving the award for Best U.S. Documentary Feature at Michael Moore’s Traverse City Film Festival the Academy-Award-winning director called the film: “Powerful... intelligent... moving... One of the best documentaries I’ve seen this year.”

Before his posting in Chicago, Quraishi was the Chief Investigative Reporter for the CBS affiliate in Kansas City. His investigative reports exposed corruption, fraud, illegal activity and prompted change in city and state government. A bold investigation into lax airline passenger screening procedures resulted in a federal probe by the Department of Homeland Security and was recognized with a 2009 Regional Edward R. Murrow Award for Investigative Reporting and a Heart of America Award from the Kansas City Press Club.

In 2008, he co-hosted election specials from Washington D.C. focused on bilateral relations between the United States and Pakistan for GEO Television – a joint production with America Abroad Media.

Previously, Quraishi spent more than six years working at CNN. He served as Islamabad Bureau Chief/Correspondent, responsible for the network’s coverage of Pakistan immediately following the 9/11 attacks. Quraishi reported extensively on major events the region, including the Agra Summit, the ongoing conflict between nuclear neighbors India and Pakistan, the floods in Eastern India, the hunt for Osama bin Laden, the religious extremist movement in Pakistan and the clashes along the Line of Control in the disputed region of Kashmir. He reported live from Karachi on the disappearance of Wall Street Journal reporter Daniel Pearl and the bombing of the Protestant International Church in Islamabad. Additionally, he provided live coverage of the first general elections in Pakistan since the 1999 military coup and reported on the lead up to polling day in an award-winning five-part series. Quraishi was the first television correspondent to report the capture of top Al Qaeda operative and 9/11 architect Khalid Shaikh Mohammad in Rawalpindi, Pakistan. He was live from the capital as the story unfolded and conducted an exclusive one-on-one interview with Pakistan’s President General Pervez Musharraf following the arrest.

Before his posting in Pakistan, Quraishi was based in Atlanta where he worked in various capacities. He supervised production of the network’s premiere long-form news program “CNN&TIME” overseeing all aspects of field and post-production.

His work has been honored with numerous awards from the Radio Television Digital News Association, Investigative Reporters & Editors, The Society of Professional Journalists, the National Academy of Television Arts & Sciences, the Press Club of Atlantic City and the Chicago Headline Club. He has been awarded a CINE Golden Eagle Award, a Peter Lisagor Award, four National Headliners and in 2010 was an IRE Award finalist. He is a five-time Emmy Award winner and has received five Edward R. Murrow Awards. In 2004 Triangle Media Group named him one of the Top 50 South Asian Global Achievers in Mass Media.

He served on the National Academy of Television Arts & Sciences’ Midwest Board of Governors.

Born and raised on the northwest side of Chicago, Quraishi attended the Chicago Public Schools and holds a Bachelor of Science degree in Journalism from the University of Illinois at Urbana-Champaign. He is married to documentary producer/photographer and CNN veteran, Basma Babar-Quraishi, has a 14-year-old daughter and a 7-year-old son.

Follow him on social media by clicking the links above.