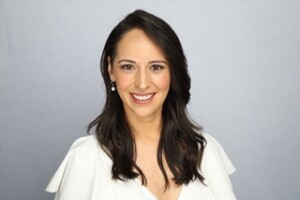 Adi Guajardo developed a passion for journalism in middle school, and her love for storytelling has flourished over the years.

A television class in 7th grade spiraled into a series of courses and clubs that contributed to her dream of becoming a journalist. At a young age, she wanted to give a voice to people living in the shadows, shedding light on injustices and holding people accountable for their actions.

As the daughter of two immigrants from Mexico, Adi saw how much her parents relied on local news to understand their rights and make decisions. Decisions that gave her the opportunity to chase after her dreams. Adi’s life experiences and various jobs at a young age have helped her understand the divisive disparities in low-income and immigrant communities. Her exposure to hardships allow her to connect with people and share impactful stories. Adi’s background fuels her passion to make a difference.

Adi has worked in several markets. In San Antonio, she took initiative and became the investigative reporter at KENS5 while also turning daily stories. Adi’s coverage includes stories that garnered national attention, including the Sutherland Springs massacre, the El Paso shooting, the Umpqua Community College slaying, the Austin bombing, and Hurricane Irma. Her heart and passion lie in investigative reporting, but she’s discovered she has an aptitude to make a difference with everyday reports.

When Adi isn’t working, she’s hiking, eating, dancing or exploring. Swimming with sharks and skydiving in New Zealand are at the top of her bucket list.

If you know of a great hike, have a favorite place to eat or a story idea, don't hesitate to reach out to Adi on Facebook, Twitter, or shoot her an email: adi.guajardo@thedenverchannel.com.