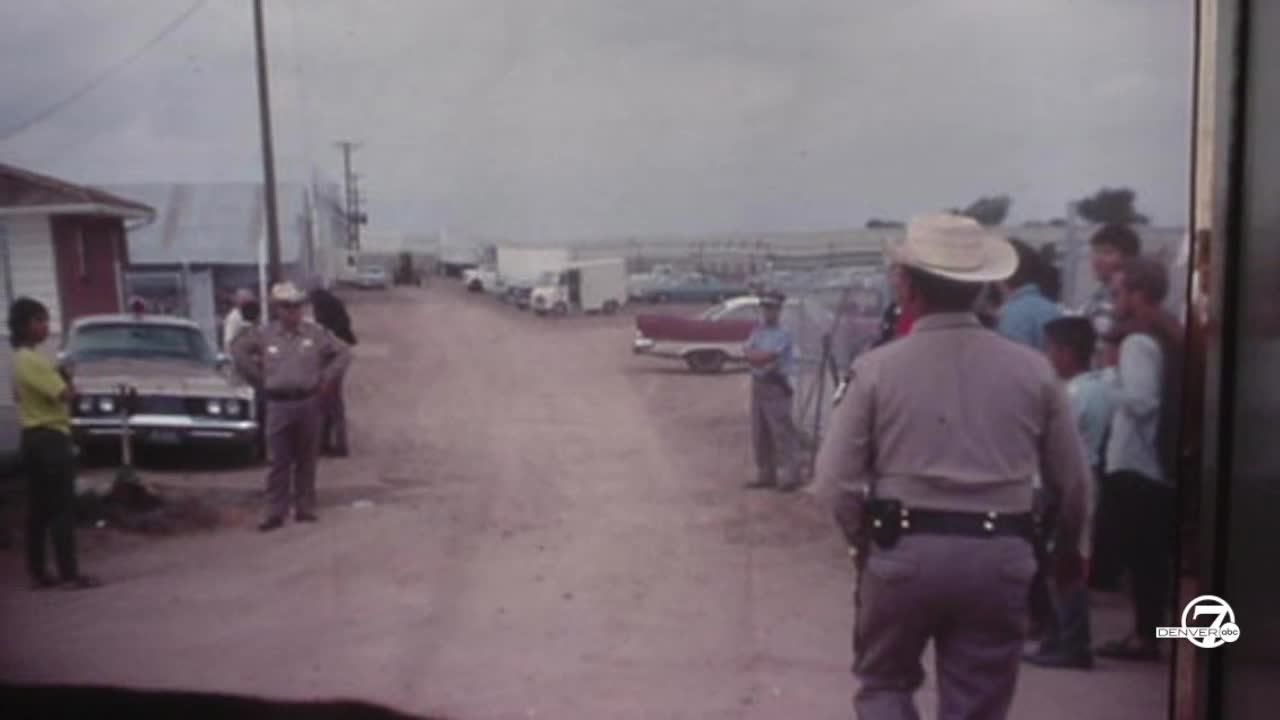 As the organizer of the Kitayama Carnation Strike, Lupe Briseño demonstrated the strength and power of Latina leadership in Colorado’s Labor Movement and set the stage for the Colorado Chicano Civil Rights Movement of the 1960s and ‘70s. That strength has earned her a spot in the Colorado Women's Hall of Fame class of 2020. 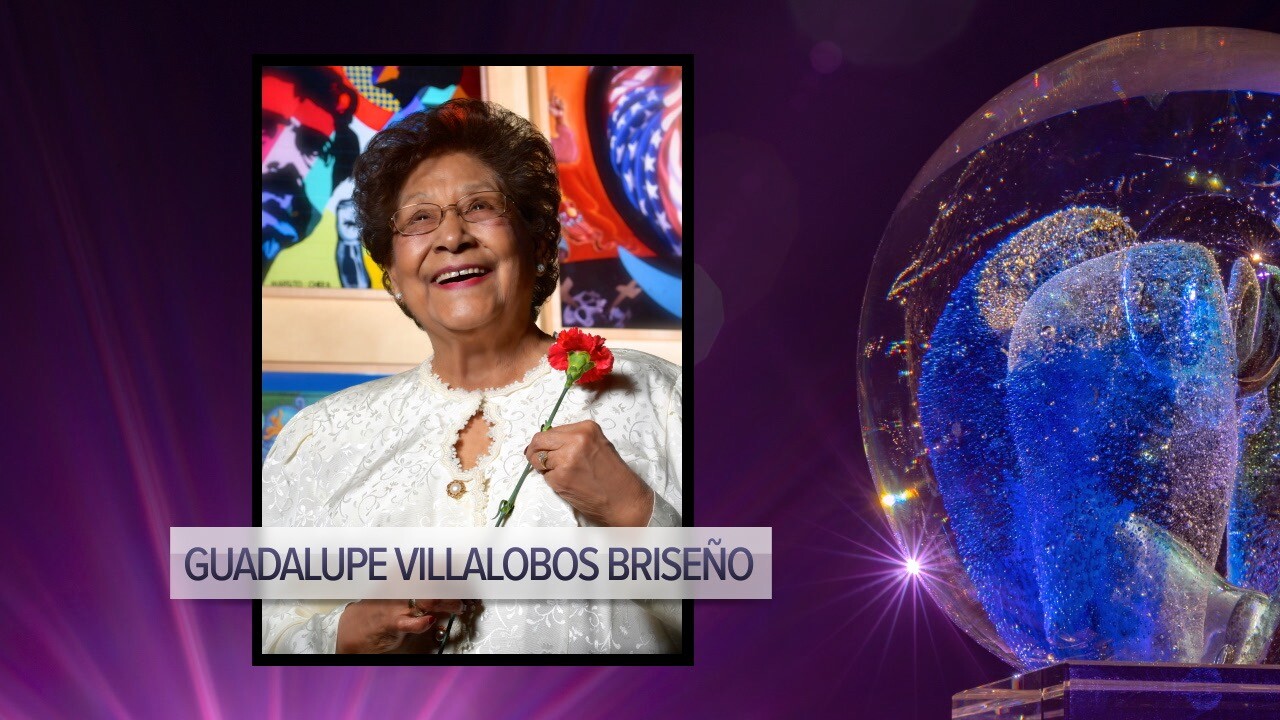 Tell us a bit about your family and your upbringing.

I grew up everywhere. As a young girl, my family traveled a lot. We were migrant workers; my father was a crew leader for the Libby company. His job was to recruit people to come work in the fields for Libby in Chicago. Working in the fields, you meet and work with different kinds of people. It’s very diverse and multicultural. And you find that your coworkers have huge respect for each other.

That’s the way I grew up. I married young. My husband literally was the “boy next door.” We had five children; four are still living. We’ve been married for 68 years. My husband has supported me in everything I did or got involved in.

In (year), Joe and I and our kids moved to Colorado from Texas. Our kids graduated from Brighton High School. My son (name) enlisted in the Air Force.

When you went back to work, your life changed immensely. Tell us about that.

“When my kids were old enough to attend school, I decided to get a job,” says Lupe. “So I applied to the Kitayama floral plant, about four miles north of Brighton, and was immediately hired.”

Lupe recalls how on her first day she heard women “crying because of the abuse that was going on in that plant.” Rallying the workers, she decided to lead a fight for change.

Employees at Kitayama, primarily Mexican American women, had been subjected to miserable working conditions. In addition to long hours and no overtime pay, the employees were forced to work in a humid, muddy floral nursery, often leading to accidents and health complications. Witnessing these conditions, Lupe realized the need for action.

It did not take long for Lupe to begin organizing the women at the Kitayama plant. The employees began holding meetings to decide their course of action. Rather than quitting, the women believed that they could affect change not only for the Kitayama workers but also for generations of laborers to come. In this vein, they created the National Floral Workers Organization (NFWO) and began planning for a strike. Unbeknownst to her, the Kitayama strike and the NFWO would become a rallying point for Colorado’s Chicana/o movement.

“We decided on a four-step plan of action to be carried out in the following months,” says Lupe. With her leadership, the NFWO women began their quest for better treatment.

Despite the well thought out plan of action, the NFWO still had a long, arduous road ahead of them.

What were the main obstacles you faced?

“When the Kitayama bosses found out what we were doing, they called a meeting after work,” says Lupe. “Everyone in the plant attended that meeting. Ray Kitiyama was angry. Someone had blown the whistle.”

Lupe sat in the front row at the meeting. According to Ray Kitayama, “they were lucky to have a job !” He berated the employees with offensive, disgusting language. Lupe felt like she’d been slapped in the face.

The next day, the women had their own meeting in Brighton. “Ray Kitayama crashed our meeting, took over, and gave us an ultimatum,” says Lupe. “The next day when we showed up at work, there were police all over the plant area. People were crying, feeling sick. I tried to encourage them to hold on and then we went to work.”

Lupe began speaking to employees throughout the plant to encourage unionization. Ray Kitayama did not respond well to this news. After returning home from work one Saturday, Lupe heard a knock on her door. Kitayama and his assistant had showed up at her home to inform her that she was fired. This news, however, did not dissuade her. Win or lose, she was not going to give up the fight. She looked him straight in the eye and said, “I will fight you to the end. This is not the end!”

After her dismissal, the NFWO voted to begin the strike on July 1, 1968. During the following months, the forty-five Kitayama strikers gained local and national support. Lupe personally contacted César Chávez, who helped guide the efforts of the NFWO. Moreover, the organization received recognition as an affiliate of Chavez’s United Farm Workers Organizing Committee. The strikers also garnered recognition from local Chicano organizations, earning support from Corky Gonzales’s Crusade for Justice as well as the Chicano students at the University of Colorado Boulder.

During those times of struggle at the Kitayama Carnation farm, from where did you draw your strength and inspiration from? How do you persevere when the odds were so much against you?

“I got all this from my Dad. He was very strong man,” says Lupe. “I watched him when I was growing up. He would not hesitate to do even the most dirty, distasteful jobs like spreading fertilizer. He did it even though it was one of the worst jobs. He always did the right thing.”

“The women supported the men. They never had done anything like this before,” said Lupe. “We set it up like an official union should, though it took time to get organized. We all had family responsibilities – kids, homes, husbands.” Although the women were more in a support role…they would not back down.“

Notwithstanding widespread support from a number of influential organizations, the Kitayama workers continued to struggle. Ray Kitayama remained steadfast in his refusal to negotiate with the striking women, and conditions on the picket lines became more grueling. For some women, months of striking had taken a financial toll on their families. Some would attend the picket line in the mornings before going to work in the beet fields, only to return to the picket line after their shifts.

The conditions at the picket line only grew worse with the coming of winter. After eight months of striking, the women decided to make a last-ditch effort of nonviolent protest, chaining themselves to the gate of the Kitayama plant. In response, Weld County police officers showed up at the plant. Under the orders of Ray Kitayama, the officers proceeded to cut the chains and spray tear gas on the striking women. “Through our veil of tears,” Lupe said in an interview. “You could not see our broken hearts.”

After 221 days of striking, Lupe and the other women decided to call it off. Although they did not achieve every goal of theirs, the strike was relatively successful. “Working conditions at the Kitayama plant did improve,” said Lupe.

The personal story of Lupe Briseño is inspirational in and of itself. A woman with no experience in organizing labor movements had successfully led an eight-month strike, collaborating with a number of influential organizations. Within the context of a predominantly male-led movement, Chicana women like Lupe certainly opened the doors for future female activists.

Nevertheless, the Kitayama strike had implications that went beyond the strikers themselves.

As evidenced by statewide and nationwide support for the Kitayama strikers, Lupe’s activism struck a chord with many Chicano/a leaders. Whether or not she viewed herself as part of a broader movement for Chicano/a justice at the time, it is clear that this small strike on the outskirts of Denver quickly became part of the larger narrative.

What will be the biggest challenge for the generation of women behind you? And what one piece of advice would you give them?

“The biggest challenge, even today, is to not be silent,” said Lupe. “But it is hard to speak up. Women must have a voice and it will always take courage.”

Is there a message you want to make sure we are sharing with others?

She continues, “If you see something wrong, no matter what kind of work you are doing, there must be pride and honor…respect. Say something if you are not being treated right.

I’m very proud of this honor,” Lupe says. “Back then, I was doing what I thought was right and would not be deterred. People learn to respect you if you are strong and have courage.”