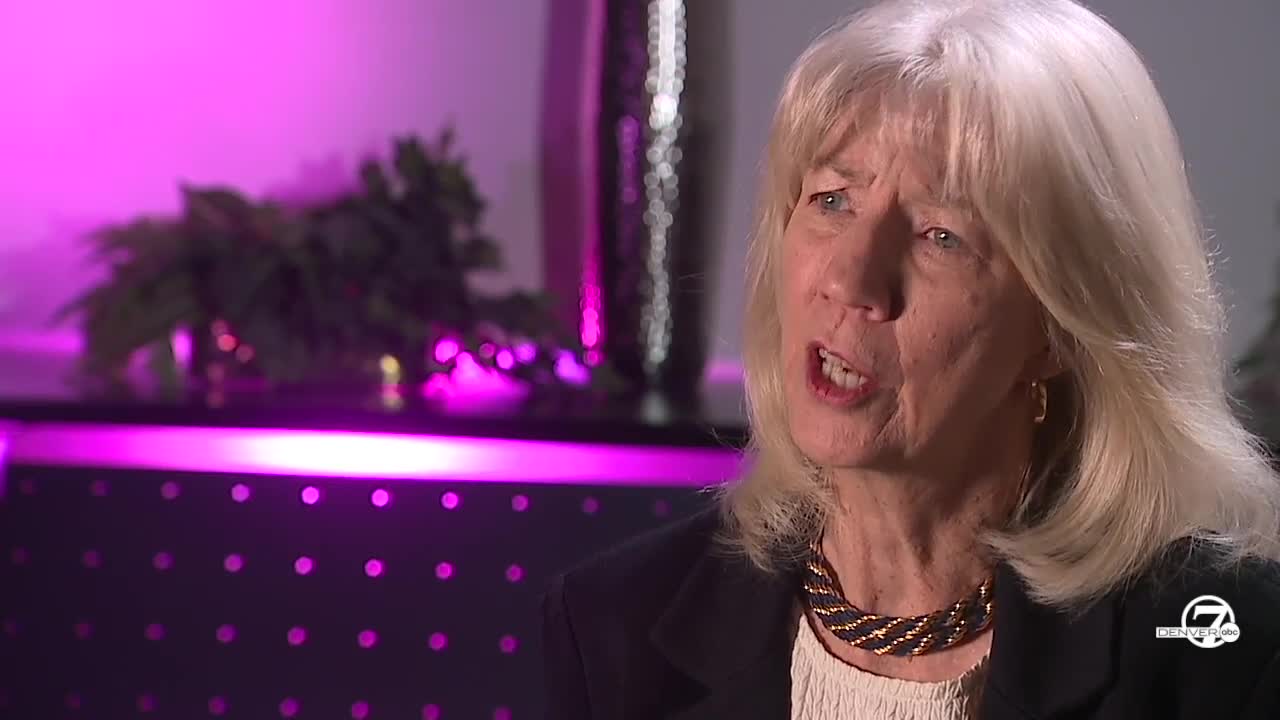 A 2020 inductee into the Colorado Women's Hall of Fame, Gale Norton was the first woman Colorado Attorney General (1991-99) and the first woman to be appointed as Secretary of the U.S. Department of the Interior (2001-06). 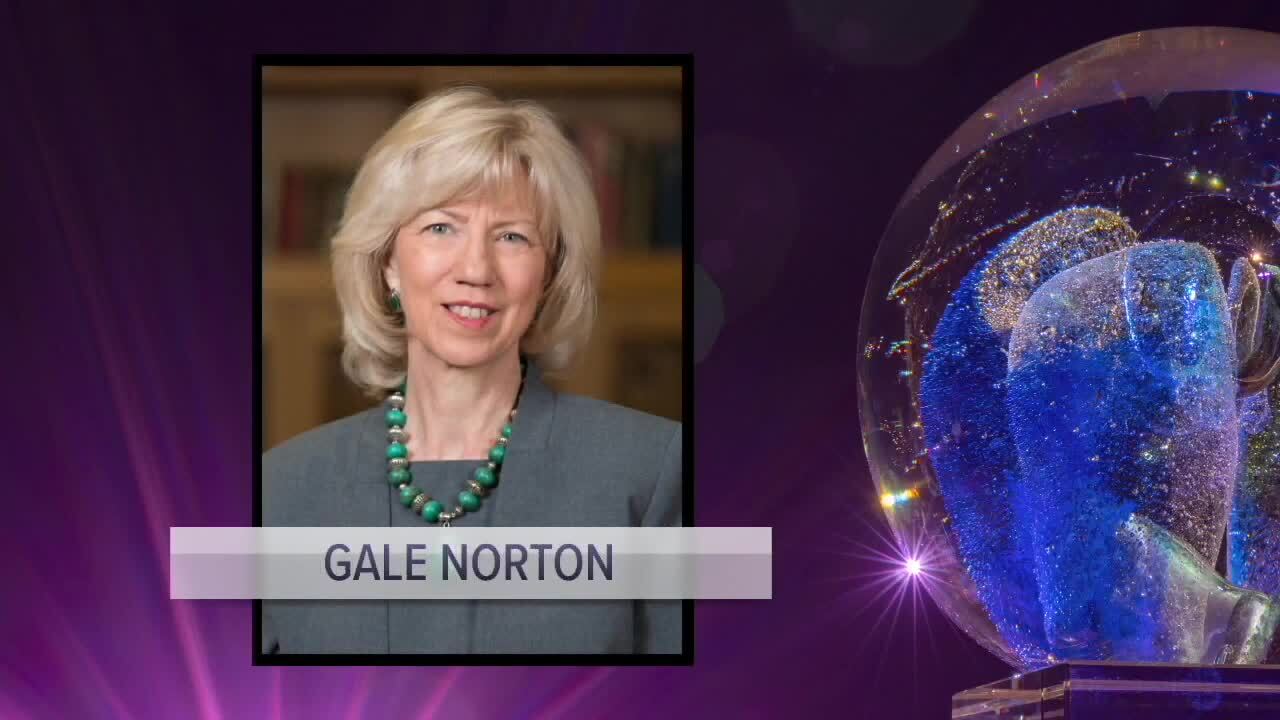 There are a couple of notable areas in your background that seem to have helped shape your worldview. Can you share how your childhood experiences influenced you?
I was born in Wichita, Kansas, and raised in Thornton, Colorado. My dad was an aircraft mechanic. Eventually (when I was an adult), he worked his way up to becoming president of a subsidiary of Gates Learjet. My mom was a homemaker, devoted parent and volunteer. She was involved with me in Camp Fire Girls and other “kid” activities.

My parents in influenced me in two very important ways.

Neither of my parents had college degrees, but they encouraged me to pursue an education. I have to smile whenever I think about this . . . my parents encouraged me to save my allowance to help pay for college. They never expected to fund my education with that 25 cents a week. It was a subtle way of making clear that college was a realistic goal. From the time I was in grade school, education and a career became a clear part of my mindset. My parents didn’t push me, they just showed they thought I was capable of accomplishing many things. They never said my prospects were limited because I was a girl.

Second, they inspired my love for nature and the outdoors. We did lots of Sunday drives to the mountains -- hiking, picnicking, watching wildlife, and just enjoying the stunning beauty of Colorado. This love for nature helped shape my life and career.
I usually rode a bus to school, and as we topped one hill there would be a panoramic view of the Denver area. An ugly and persistent brown cloud of smog hid downtown in the 1960s. That vision riveted my attention on pollution and the environment. As I grew up, environmentalism got me interested in politics and eventually in law.

You went on to attend the University of Denver Law School, at a time when comparatively few women went to law school. How did your early career influence the direction of your professional life?
My first clients were farmers and ranchers, geologists and land men, miners and entrepreneurs – almost all men. But my law degree gave me the stature to be accepted. Their general attitude was summarized by one man’s comment, “I didn’t really think women could be lawyers, but you’re OK.”

The theme of my early practice was helping people cope with and fight the heavy hand of government regulation. We challenged federal directives written in Washington that made little sense when applied in the West. I saw how beneficial innovation could be stifled by overly rigid regulation. I became a strong supporter of free markets and local governance. Politically I was a Libertarian, and then a Reagan Republican.

My beliefs came into sharp focus during two international trips. I traveled to the USSR and China in the early 1980s. In Russia, I studied their court system and saw people prosecuted for basic entrepreneurial activities, like reselling a radio. Communist central planning left store shelves bare and average people scrambling for consumer goods. I met clandestinely with refuseniks who faced prison or exile for expressing dissent. My hotel room was clumsily bugged.

In China, I stayed at a university and talked with students who had suffered through Mao’s Cultural Revolution. They were awaiting word of the jobs they would be assigned upon graduation. They had no choice about where they would live and work. (A decade later, I returned to China and saw the beginnings of the incredible transformation wrought by allowing more economic freedom and entrepreneurship.) These trips made me very enthusiastically proud of America’s constitutional liberties and free enterprise system.

Much of my career and my personal intellectual passion has been finding ways of protecting the environment while meeting important human needs. I was fortunate to spend a year at the Hoover institution at Stanford as a post- doctoral fellow. I focused on ways that market incentives could be used to encourage environmental innovation. One of the key strategies was emissions trading, which is now known as “cap and trade“. This approach is controversial in the context of climate change, but it has worked very well in other environmental contexts.

Your career took a turn toward government service. How did that begin?
After spending several years litigating against the federal government, working for a federal agency was a real change of pace. I served in the Reagan Administration in Washington in several capacities, including supervising the attorneys for the National Park Service and Fish and Wildlife Service. I was younger than most of the attorneys I supervised, so I had to work hard and thoroughly understand the legal issues to win respect.

I enjoyed working in Washington DC, but I was looking forward to getting back to Colorado. My husband, John Hughes, encouraged me to run for Colorado Attorney General, even though only two women had ever served as a state Attorney General in the entire history of the U.S. A few people openly expressed skepticism about whether a woman could win the AG race. But being a woman may have helped with some voters – at least it made me easier to remember.

Campaigning was quite an experience! We borrowed my parents’ station wagon to travel around the state. John drove while I slept in the back. We campaigned hard – and I surprised people by unseating the incumbent.

What challenges did you face as Attorney General?
I served eight years as Attorney General. I learned that a key part of management is surrounding yourself with talented people who can share the challenges. I brought several outstanding lawyers into the Department of Law with me. I also found that the office had some excellent career lawyers. Together the 200 attorneys in that office did a great job representing the many agencies of Colorado state government. We combatted consumer scams, won a court victory to strengthen cleanups at the Rocky Mountain Arsenal and Rocky Flats, prosecuted criminal appeals, and handled many other fascinating issues. I personally argued two cases at the U.S. Supreme Court.

Most significantly, I was a negotiator of the National Tobacco Settlement. Making headway against the tobacco companies required over a year of effort, including intense sessions in New York and Washington. We achieved new restrictions on marketing cigarettes to kids and obtained hundreds of billions of dollars for the states.

You stepped into another new role for a woman when you became the first female Secretary of the U.S. Department of the Interior. What challenges did you face, and from where did you draw you strength and inspiration?
When President George W. Bush asked me to become the 48th Secretary of the Interior, I was overjoyed to have that opportunity. I had the chance to put my ideas about common-sense environmental solutions into practice. People (including me) fervently love our national parks, wildlife, and scenic landscapes. But our public lands are also economically important. At the time, almost a third of America’s domestic oil, natural gas, and coal came from areas managed by the Department of the Interior. We managed hundreds of dams that provided water for much of America’s food supply. Interior’s mission is filled with built-in contradictions, and trying to balance the conflicts is an awesome challenge.

The management responsibility is huge. The Department administers almost one out of every five acres of land in the entire country. There are over 70,000 employees, with a budget over $10 billion. I’m probably crazy, but I loved that job.
As with managing the Colorado Attorney General’s office, having a core leadership team of great people made all the difference. Among them were many women. I didn’t set out to hire women for positions that had never been filled by women. I just sought out the best and most talented people, and with that open attitude we assembled a diverse team from across the country.

I also enjoyed working with my colleagues in the White House and the Cabinet. In particular, the aftermaths of the September 11, 2001, attacks and the Rita/Katrina hurricanes caused us to collaborate on solving problems.

The cornerstone of my tenure was “cooperative conservation”. This is the idea that bringing people together and seeking collaborative solutions for environmental problems can find some of the best ways of tackling challenges. At the heart of cooperative conservation is the belief that for conservation to be successful, the government must involve the people who live and work on the land. We reached out to states, tribes, local communities, businesses, conservation organizations, and private citizens to build constructive solutions. Our hope was that when people with conflicting views sat down together, they could find common ground. We developed a variety of ways to foster this type of local problem-solving.

What have you learned and observed from a lifetime of dealing with conservation, energy and environmental issues? Are there areas of common ground that can go beyond partisanship?
There is unfortunately a tendency to think that the heavier the hand of government, the better it will be for the environment. As someone who believes passionately in human freedom and liberty, as well as loving nature, this attitude always bothered me.

I have found that most people greatly value a clean and healthy environment. We also know that innovation can make great strides in solving humanity’s problems. Overly prescriptive regulation can stifle the creativity that is necessary for problem-solving. This doesn’t mean there should be no environmental standards. It means we should be smart about setting goals and then encouraging diverse ways of accomplishing those goals.

Regulations that are poorly designed can stifle creativity and innovation. Because of the shale revolution, the US has progressed more quickly than any other major nation in reducing greenhouse gases. No one in government (and I can speak as someone who was there) mandated or even predicted that possibility. Everyone in Washington assumed we would become increasingly reliant on foreign oil and that reducing greenhouse gas emissions would require radically different policies. A system that is based on the idea that government policy-makers have all the right answers will miss some important benefits.

What will be the biggest challenge for the generation of women behind you?
We have witnessed the dawn of women taking an equal role in society. This is a dramatic change, diverging from thousands of years of history. The remaining question is whether this is a passing fad, or a permanent change. I think it is a permanent change. I like to think that we have seen a progression in human society toward more individual liberty, more political freedom, more opportunity for each person to live up to their own potential.

More countries are moving toward democracy, although there are still many repressive regimes. Technological innovation allows worldwide communication of ideas and allows young people’s dreams to take flight beyond the narrow confines of their neighborhoods. Educational opportunities are expanding, especially for girls.
The next generation of women will have opportunities, but it’s important that they realize they still have to work at and take advantage of those opportunities. We all have the opportunity to be pioneers. There are more trails to be blazed. Just because you aren’t the absolute “first” does not mean you aren’t a pioneer.